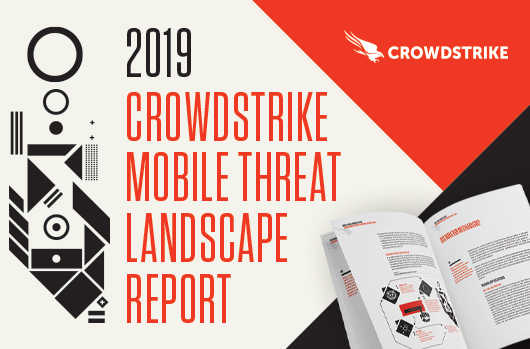 The universal adoption of mobile devices in business environments has created new attack vectors that organizations struggle to address. A new report from CrowdStrike, the “Mobile Threat Landscape Report: A Comprehensive Review of 2019 Mobile Malware Trends,” offers a deep-dive into some of the threats that plague mobile devices, and provides recommendations for how organizations can best secure their data and networks against mobile threats.

CrowdStrike’s Mobile Threat Report details how mitigating the risks has become even more urgent because of the rapid adoption of mobile devices worldwide. In some regions, such as Latin America, mobile devices have surpassed desktop computing as a source for both business and personal use, including email access, banking and authentication, making mobile security an even more pressing issue.

CrowdStrike’s report offers an overview of the key types of malware observed so far in 2019 and the deployment mechanisms adversaries typically use. It also identifies the adversary groups and unaffiliated criminal actors that target mobile devices and how their tactics — and the mobile threat landscape in general — are evolving. The report includes valuable recommendations that can help you better secure your organization against mobile threats.

Some key findings from this report include the following:

Mobile Malware Comes in a Variety of Forms

Much like malware families developed for traditional desktop computing platforms, mobile malware can take a variety of forms, depending on the capabilities and motivations of the developer and those deploying the malware. While some state-aligned actors may seek to establish long-term persistence on a device to gather intelligence on a target over a period of time, criminally-minded groups are more likely to focus on malware to intercept banking credentials in order to provide a quick route to financial gain. Meanwhile, less sophisticated criminal actors may seek to repurpose existing revenue-generation models, such as ransomware and cryptomining, although often with limited results.

Despite the wide variety of mobile malware families observed in the wild, the report categorizes most into five major types, which are described in detail. The report also addresses the motivations behind various threat actors, whether it’s financial gain, intelligence gathering or disruption, and breaks down their tools and objectives depending on the class of threat actor involved.

Recommendations for Strengthening Your Mobile Security

The report stresses that organizations must now contend with not only the ubiquitous use of mobile devices in their environments but the fact that they may hold significant amounts of corporate data. Mobile threats will continue to proliferate as both nation-state and eCrime groups innovate and refine their mobile attacks in their efforts to evade organizations’ security defenses. CrowdStrike recommends that all organizations employ measures to help better secure the mobile devices connecting to sensitive corporate data every day. The following is a brief summary of these recommendations.

Who Is PIONEER KITTEN?