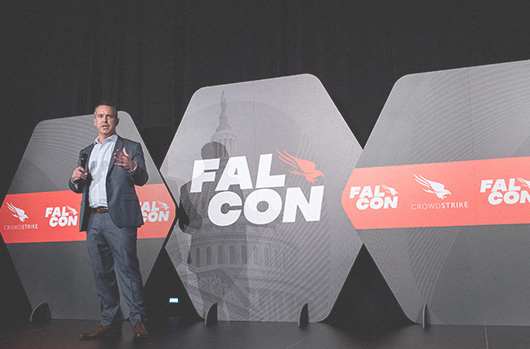 CrowdStrike’s first Fal.Con for Public Sector cybersecurity conference — held last week at the new International Spy Museum in Washington D.C. — brought together more than 140 cybersecurity professionals and experts from across federal, state and local public agencies, with many more accessing a livestream of the sessions.

Participants gathered for a day of in-depth discussions and compelling presentations by industry and public sector leaders, as well as panels of experts. They discussed the state of the current threat landscape, how it is impacting public sector entities, and how these organizations can increase their cybersecurity readiness.

The following are some highlights from the keynotes and sessions at the conference.

You can access all the session and keynote videos in one place by visiting the Fal.Con for Public Sector webpage, or access each video separately via the YouTube links below.

Countering Cyber Adversaries: Attack Trends and the Importance of Speed

CrowdStrike Co-Founder and CTO Dmitri Alperovitch opens his discussion by outlining the three generations of cyberattacks that he has observed over the years and how we are currently in the “age of destruction,” where the cyber world has crossed into the physical. Evidence of this can be seen in nation-state attacks against government agencies, public utilities and other entities. These attacks are designed to cause damage and disruption.

In his session, he advises that to successfully defend against these sophisticated attackers, both public and private sector organizations, though differing in many ways, must incorporate the same strategies into their security: continuous threat hunting, cloud-enabled technologies and speed as a priority.  He also explains the following principles:

He concludes with the advice that public sector agencies that can meet that criteria have a better chance at thwarting today’s innovative and sophisticated threats.

State of the Threat: A Global Intelligence Perspective

CrowdStrike Vice President of Intelligence Adam Meyers addresses attendees on what threats his team has observed targeting the public sector, and what could lie ahead. He also cites recent intelligence trends and why it’s so important for public sector organizations to operationalize threat intelligence, which can help them mount an effective and proactive defense.

He begins by advising that the first objective in assessing your adversary is to figure out whether the threat actor is working on behalf of a nation-state, eCrime organization or a hacktivist group. This reveals motive. He also rates various adversaries according to the strength of their intentions and capabilities.  Some adversaries, such as Iran, have strong intentions — meaning a strong desire to engage in attacks —  yet their capabilities are weaker. Others, such as eCrime actors, may have strong capabilities but their intentions aren’t as strong unless they stand to achieve substantial financial gain.

Adam also discusses ransomware as a powerful trend, which he says has evolved from mostly commodity-level attacks in 2016, which targeted large numbers of individual victims with lower ransom demands. Today, adversaries have transitioned to targeting specific large enterprises and demanding much bigger ransomes — often in the hundreds of thousands of dollars. These attacks are known as “big game hunting.”  He explains that big game hunting attacks don’t have to be complex —  attackers are using means like commercially available penetration testing tools and “living off the land” techniques leveraging legitimate software tools already on the network.  While this approach might take attackers some time to move laterally and break out of the environment —  once they do, the losses can be substantial.

Adam covers the major big game hunting actors, including BOSS SPIDER, INDRIK SPIDER, GRIM SPIDER and PINCHY SPIDER, and also discusses some new eCrime tools his team has observed, in use by threat actors such as LockyGoga and Robbinhood.

He cautions that nation-states such as North Korea are constantly improving their capabilities — finding new and innovative ways to thwart security. He notes that these groups will continue to target government agencies for financial gain, because getting their systems back up and running is of paramount concern, often making them more willing to pay a high ransom.

President of CrowdStrike Services and CSO Shawn Henry’s opens his presentation by recounting his previous work with the FBI investigating terrorism, organized crime and financial fraud. He echoes Alperovitch’s concerns that the cyber world is much closer to the physical world than ever before.

He also addresses several factors that make cybersecurity particularly challenging for government agencies. These factors include: networks covering multiple agencies and  thousands of endpoints; the lack of communication and coordination; how extensive government networks are, with multiple agencies involved; the bureaucracy and transitional nature of the government workforce; and finally, the increasing innovation by adversaries targeting public sector networks.

Shawn addresses the need for improvement and says that government entities can learn from the private sector. He emphasizes the OODA (observe, orient, decide, attack) loop, a model that can be critical to any effective defense strategy, and reiterates the need for speed in response to threats. He also recommends specific steps federal, state and local agencies can take to improve their cybersecurity readiness:

Senior Advisor for Cybersecurity Strategy to the Director of the National Security Agency (NSA) Rob Joyce opens his keynote by discussing the four trends the NSA is watching as they monitor the current threat landscape:

Rob’s recommendations for how public sector agencies can better defend themselves in light of these trends include:

Watch the video of the Rob Joyce keynote

Other Fal.Con for Public Sector Sessions

Modernizing Services and Protecting Data with the Cloud (Panel)