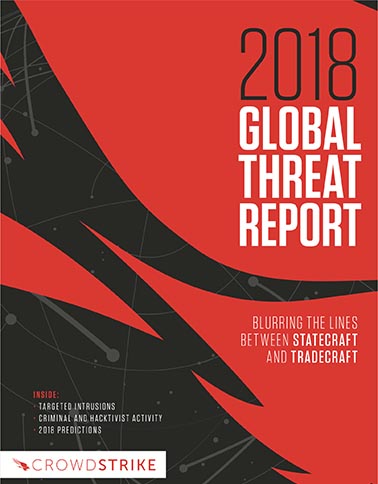 BLURRING THE LINES BETWEEN STATECRAFT AND TRADECRAFT

The 2018 CrowdStrike® Global Threat Report offers one of the industry's most comprehensive reports on today's most damaging cyberattacks and dangerous adversaries. It contains valuable insights into the evolving threat landscape and includes recommendations that will help you be better prepared for the security challenges your organization faces now and in the future.

The findings presented in this year's report represent research conducted in 2017 by CrowdStrike's threat intelligence, managed hunting and Threat Graph™ data collection and analysis units. Each of these teams has compiled crucial information on topics ranging from nation-state adversaries and the tools, tactics and procedures (TTPs) they are employing, to the trends observed by CrowdStrike experts that are likely to affect your organizational security in 2018.