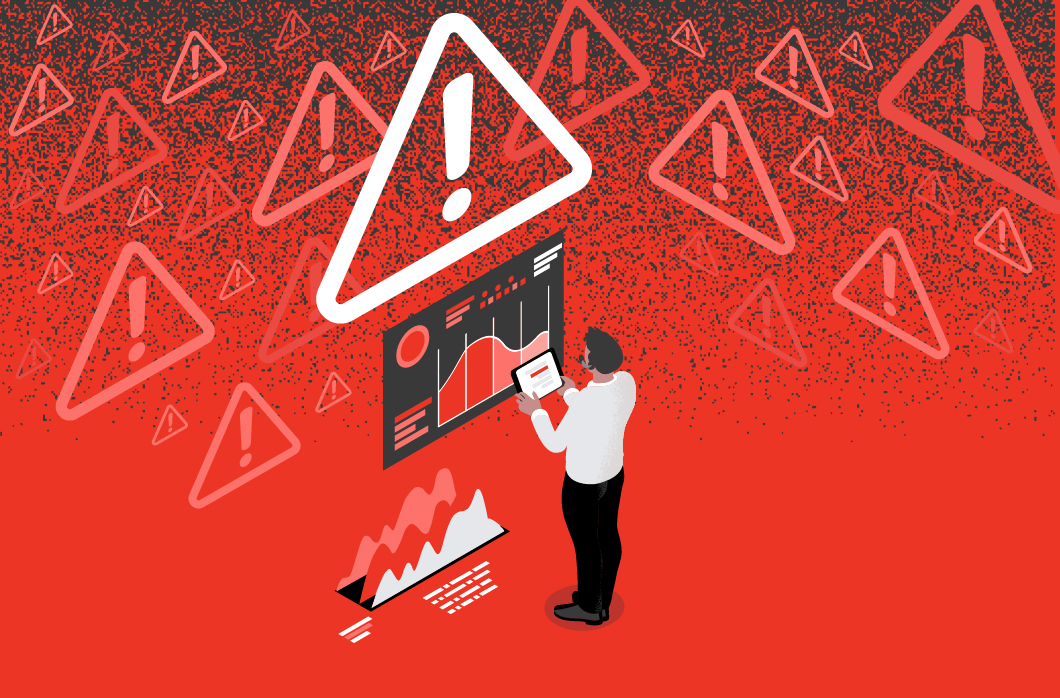 We should take a closer look at what just happened in this common scenario. Because every alert has to be viewed by a human analyst, and we quickly exhaust our human analysts’ capacity to triage every alert, we have had to turn off noisy alerts. This represents a waste of effort in building the alert. It also means a degradation of our ability to detect the kind of activity that the noisy alert was intended to detect.

Furthermore, when investigating a real malicious incident, we see a lot of ignored rules that show up as true positives.

This apparent paradox contains at its core both the cause of alert fatigue and the reason why adversaries can successfully carry out massive campaigns like Sunburst. It is vital that we pay close attention to this paradox’s lessons and not continue with the status quo.

Let us start by exploring alert fatigue and how the industry has been responding to this challenge. Alert fatigue is when an overwhelming number of alerts desensitizes the team tasked with responding to them; this commonly leads to missing, ignored, or delayed responses. Over the years, the security industry has developed several standard practices to respond to the alert fatigue challenge. The most common are detection filtering, capacity management and prioritized detection. Taking a closer look at these practices allows us to understand how they may impact security operation detection capabilities.

Capacity management is the process of assessing the number of detection alerts produced over a period of time and how fast these alerts can be investigated and resolved. As the security maturity of the organization goes up, so does the size of your detection corpus. To keep up with an increased number of alerts and hence continue to detect and respond promptly, the size of the security operation team has to expand. This can lead to challenges such as attracting, developing, and retaining talent and ultimately to a linear operational cost increase.

Prioritized detection considers some of the shortcomings of the capacity management approach and recognizes that team size cannot scale at the same speed as your detection corpus. To continue to focus on what is expected to be good detection logic, a priority system is applied to detections. It is not uncommon in the security operations world to have detections tightly connected with response activities. This process leads to a response queueing approach, where detections with a lower priority are ignored or queued and delayed until a sufficient workforce can handle the load.

The above approaches have been adopted by many. While they can appear as an effective way to deal with the alert fatigue challenge, they also increase your operational risks and cost.

What if there was a better way to manage and develop your detection corpus while avoiding alert fatigue and its consequences?

A brief web search about how security operations build detection capabilities will quickly surface the ubiquitous “funnel” approach to detection, closely related to the so-called “Pyramid of Pain.”  But this simple approach, sometimes couched as cutting edge or a best practice, is just a natural outcome of evolutionary processes that have existed at least since Snort rules dominated the prehistoric security operations landscape. The more general the detect, the noisier it becomes, and the smaller the fraction of those false positive prone detects that uncover real attacks. The more false positives, the more pressure from analysts to disable the detect.  The final result is that the noisiest detections get turned off. “The funnel” is just another way of saying we asked detection engineers to write many rules that are now wasted effort because no analysts are looking at them. Creating exceptions or allowlisting is another form of tuning that we will examine here.

There’s not much new to say about managing unwieldy repositories of detection logic that hasn’t already been the subject of 30 years of hand-wringing. The underlying issues need to be identified, and a different approach is required to get us off the detect treadmill. 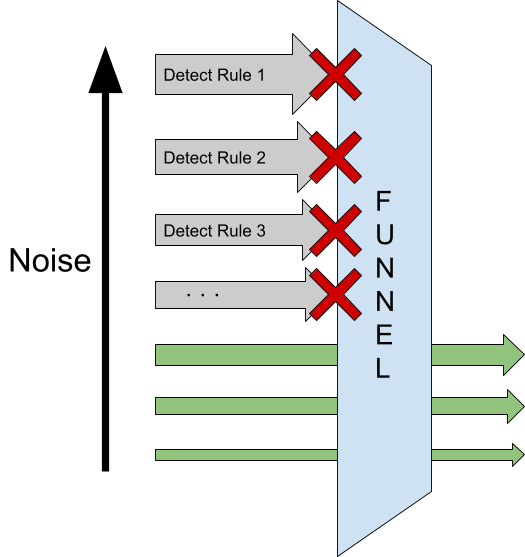 Innovation is often not so much about clever solutions to well-understood problems but rather about clearly understanding that there is a problem and what the causes are. And this is the case with the detection funnel approach to alert fatigue. The fundamental problem with the funnel approach that leads to alert fatigue and ignored detects is that a detect is always shown to an analyst or never shown to an analyst. This is just the way it has always been done. Alert fatigue is the inevitable result.

But the other side of the paradox provides a fascinating thread to pull on. When we discover and investigate an actual, malicious incident, we find that many of those ignored rules that are deemed too noisy to show to analysts — many show up as true positives during incident investigations. Furthermore, we often find that if somehow we had been able to pay attention to those noisier detects that turned out to be true positives, they may have allowed us to detect the malicious activity earlier than is possible with just the curated set of low volume alerts. We need  a way to determine when to pay attention to noisier rules, and surface them as alerts.

And as we dig deeper, we find that the problem gets much worse. Less frequent alerts tend to be brittle — they tend to detect a particular, narrow set of attack techniques that fall out of favor with attackers over time. They are reactive, detecting only specific aspects of known recent attacks with little chance of detecting tomorrow’s attacks. As a result, those brittle detects need to be replaced by new rules that detect new attacker behaviors. On the other hand, identifying more general behaviors tends to accrue new false positives, requiring constant effort to maintain or “tune” them according to the funnel model. This effort represents another cost in person-hours.

The result is a solution that scales poorly and eventually places a ceiling on how many detect rules we can afford to show our analysts and how many we can afford to maintain. As the environment changes, the rules need tuning. As our detection corpus grows, the overall tuning load increases proportionally, or some rules must be culled from the detection corpus. As attacker behavior changes, new rules need to be developed, which increases the detection corpus maintenance workload. The growth of enterprise environments results in a proportional increase in the number of alerts that have to be triaged. The fact that there are so many different axes for noise to increase over inevitably leads to the collapse of the funnel model. The funnel simply does not scale.

Clearly, we need an alternative to the funnel model. Simply defining an ever-increasing repository of detects, each of which creates a stream of alerts, with an ever-increasing maintenance workload, does not scale to the point necessary to detect the most consequential campaigns.

In subsequent blog posts, we will explore in more detail how the CrowdStrike Falcon®® platform’s CrowdScore technology makes dynamic decisions about whether detect rules will result in alerts, allowing much better prioritization of investigation leads, earlier detection of malicious activity, and contextualized, holistic presentation of the data.

See Demo
How to Use Falcon Spotlight’s ExPRT.AI
Building a Modern Mentorship in the Cybersecurity Industry