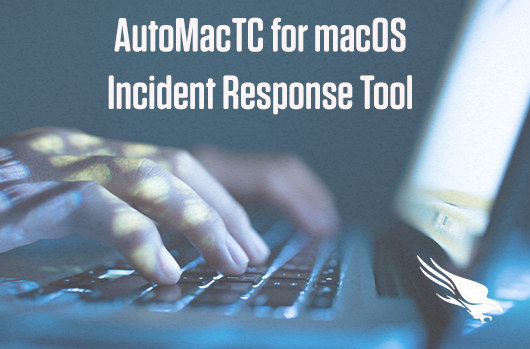 You can find the AutoMacTC tool in our public Github repo.

AutoMacTC, or Automated macOS Triage Collector (pronounced auto-mac-tick) is a framework of python scripts designed to parse macOS forensic artifacts and produce output in a format that can be easily accessed and leveraged by forensic analysts.

We wrote AutoMacTC primarily with incident response triage and live collection in mind, but it can also be run against a (mounted) disk image for offline analysis.

Why Did We Create It?

Inspired by Crowd Response, the Crowdstrike static host data collection tool, we wrote AutoMacTC to support the macOS forensic community by releasing scripts that automatically parse several of the artifacts that we analyze during macOS incident response investigations. Our main considerations in the development process have been:

This utility consists of a main script (automactc.py) and module scripts that can be called by the main script. Each module performs self-contained and independent analysis of a particular forensic artifact.

By calling the main script and specifying the modules to run, AutoMacTC will:

The current module set will collect and parse data from several forensic artifacts. These include:

How Can You Use It?

AutoMacTC does not require any additional dependencies to run. It requires only Python 2.7, which ships natively on macOS. Organizations can deploy the tool at scale with the deployment utility of their choice.

Some specific use-cases for AutoMacTC are below.

Alternatively, you can run every module available to gather as much data as possible:

AutoMacTC also provides the ability to run against a locally-mounted macOS disk. However, this functionality requires a Mac as the analysis system — AutoMacTC cannot run on or against any other operating system — only macOS.

Tables 1 and 2 below show how this initial release of AutoMacTC can map to the MITRE ATT&CK™ Framework (for threat hunting and incident response).

Table 1. Mapping the modules of AutoMacTC to the first five tactics defined in the MITRE ATT&CK Framework.

Table 2. Mapping the modules of AutoMacTC to the latter six tactics defined in the MITRE ATT&CK Framework.