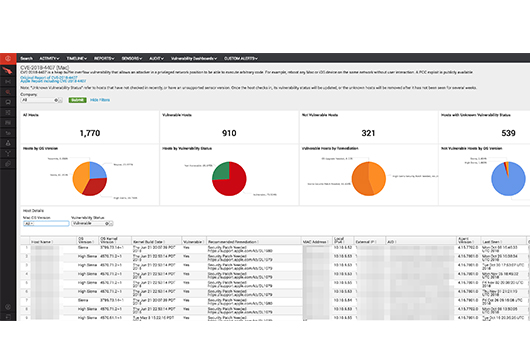 The recent discovery of the Remote Code Execution (RCE) vulnerability CVE-2018-4407 in Apple’s XNU operating system kernel may have been a cause for concern among organizations using Macs but CrowdStrike® is helping customers identify vulnerable Macs in their environments with a new dashboard.

The XNU OS is used in macOS as well as iOS, so this vulnerability impacts all types of Apple devices, including iPhones, iPads, MacBooks, etc. The vulnerability was first discovered in August, but disclosed publicly on October 30, 2018 when Apple released security updates for the affected operating systems. First reported by Kevin Backhouse, the vulnerability was fixed by Apple in their October security patches. CrowdStrike moved quickly to identify the potential risk associated with the successful exploitation of this vulnerability by providing its Mac user community with an easy way for them to gain instant visibility into vulnerable macOS hosts in their environments.

Why Customers Should Care About This Vulnerability

The risk of any vulnerability stems from the likelihood of a successful exploit and the potential impact resulting from that exploit. It is also critical for organizations to understand the size of their vulnerable population and the actions required to remediate the vulnerability. In doing so, they should consider the following facts regarding the CVE-2018-4407 vulnerability:

The Steps Mac Users Should Take

Depending on the macOS version you are running, Mac users need to update to a new version or install the security update with a fix. The table below can help you determine which case is applicable based on the current version of macOS running on the host.

Table: How to Bring Vulnerable MacOS Versions to a Non-vulnerable Version*

How CrowdStrike Protects Mac Users from This Vulnerability

CrowdStrike has worked to expand its assistance to customers in the face of this risk by creating a dashboard to identify vulnerable systems. The dashboard is provided free of charge to customers who have the CrowdStrike endpoint detection and response (EDR) solution, Falcon Insight™; CrowdStrike’s vulnerability assessment solution, Falcon Spotlight™; and those who have purchased a CrowdStrike Falcon® endpoint protection bundle. The new dashboard provides visibility into the vulnerability and patch status of the systems running macOS in their environments. A screenshot of the dashboard is included in this blog — click on the caption below the image above to see a larger version.

Please Note: The dashboard will be deployed to all customers by Monday, November 12, 2018.