Falcon OverWatch Hunts Down Adversaries Where They Hide

There is an endless struggle between hunters and adversaries. As soon as hunters shine a light on the latest malicious activities, adversaries pivot and find a new way to hide in the shadows. Indeed, of all the MITRE ATT&CK® tactic groups, defense evasion stands out as having by far the most extensive array of techniques and subtechniques. Whether these techniques are used to enable a “low and slow” strategic intrusion or to evade technology-based detections in a “smash and grab” attack, defense evasion is a critical step in adversaries’ kill-chain.

This blog explores four popular defense evasion techniques that the Falcon OverWatch™ team has seen in use by adversaries in 2021. It shares real-world examples of how OverWatch has observed these techniques and sub-techniques used by adversaries to subvert security controls and operate in a covert manner, and it provides guidance on how defenders can begin to look for the activity themselves.

Signed binary proxy execution leverages legitimate built-in utilities to execute malicious commands. Adversaries take advantage of trusted and commonly used utilities that are signed with digital certificates to proxy the execution of malicious binaries. This example looks at the use of Rundll32.

The anomalous use of rundll32.exe, coupled with irregular process activity and a burst of suspicious command line invocations, alerted OverWatch to potentially malicious activity. Deeper analysis confirmed the malicious activity and linked it to the prolific eCrime adversary WIZARD SPIDER. The adversary gained initial remote access after a phishing document was opened, resulting in arbitrary code execution under a productivity application, and providing the adversary with interactive access to a valid user account. Additionally, the code execution led to rundll32.exe being used to write a Cobalt Strike DLL to disk, allowing WIZARD SPIDER further capabilities to compromise the host.

Once WIZARD SPIDER established interactive access, they wrote a further malicious DLL file to disk. They then used the below command to proxy the execution of the DLL through a second rundll32.exe process.

The malicious DLL spawned a child process of rundll32.exe that was used to interact with explorer.exe. WIZARD SPIDER performed host reconnaissance activity under the trusted explorer.exe process. OverWatch notified the victim organization in the early stages of this intrusion and armed them with the information needed to disrupt the adversary before they could move deeper into the network or execute any ransomware payloads.

Figure 1. Execution of a malicious DLL via rundll32.exe, leading to injected threads into Explorer.exe and covert reconnaissance operations

A consistent theme of this intrusion activity is WIZARD SPIDER’s efforts to conceal their operations by operating under legitimate signed processes. While the victim organization was containing the host in response to the OverWatch notification, threat hunters observed the adversary continuing to conduct host and network enumeration activities consistent with early stage ransomware preparation operations. Ultimately, the rapid identification of the activity by OverWatch threat hunters led to the timely delivery of an actionable notification to the victim organization. This enabled them to quickly act to both contain and subsequently eradicate WIZARD SPIDER from the network before they could achieve their mission objectives.

DLL Search Order Hijacking takes advantage of how Windows handles DLLs and the search order it uses to locate DLLs for loading into a program. Adversaries can hijack this search order mechanic to load a malicious DLL into a program in an attempt to bypass security controls.

OverWatch exposed the use of this technique by a likely China-nexus adversary. The adversary was discovered operating under a valid user account, having gained access by setting scheduled tasks via an RDP session. The adversary used Certutil commands to decode and execute binaries via a batch script. They also attempted to install a PlugX implant using DLL search order hijacking in conjunction with a legitimate third-party antivirus executable and a weaponized DLL. The attacker had modified this DLL to perform reconnaissance and connectivity testing under the legitimate Windows Service Host process, svchost.exe.

OverWatch quickly uncovered this malicious activity by surfacing unusual execution of certutil commands, along with attempts to set remote scheduled tasks and a range of system discovery activity. 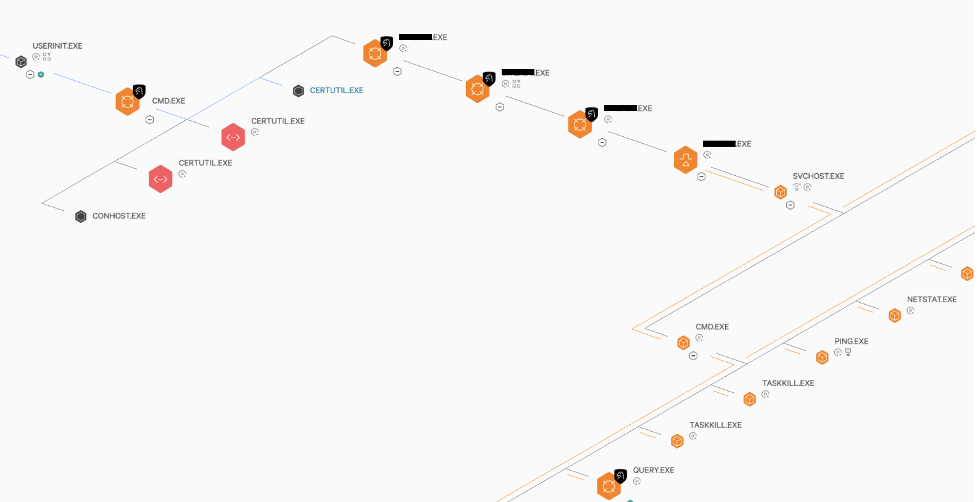 Be aware that adversaries will often use legitimate software such as Process Monitor to identify applications vulnerable to DLL search order hijacking by looking for DLLs being loaded without a full path being specified. It is therefore important to search for any DLL changes or suspicious process activity that occurs in parallel with a burst of reconnaissance or unknown network connections.

The DLL injection technique enables adversaries to inject code from a malicious DLL and execute it under the context of a target process. With this technique, adversaries are able to harness the process’s resources to perform malicious operations, all while being associated with a legitimate process. Process injection is a valuable technique for an attacker as it allows for the execution of code within the memory space of legitimate processes. This makes detection challenging as malicious use of native Windows API behavior is generally quite difficult to distinguish from legitimate API functions.

DLL injection was deployed in the early stages of an attempted ransomware operation, which aligns with activity previously attributed to WIZARD SPIDER. This intrusion took place in the wake of a successful phishing attack. Various malicious files were written to disk, including multiple executables and a DLL file, each masquerading as legitimate browser files. Analysis showed that the DLL file was intended to provide a means of performing process injection, and the executables allowed for subsequent reconnaissance and command and control in preparation for ransomware deployment.

As seen below, once the malicious DLL file was executed, the entry point “Mars” was located, and the associated code was launched, allowing injection and reconnaissance to be performed. From there, OverWatch identified communication with multiple processes, including terminal services that the adversary likely intended to use for further hands-on command execution.

OverWatch recognized suspicious remote threads being created alongside irregular process tree activity and suspicious reconnaissance activity. Any one of these on their own may have been dismissed, but analyzed together they paint a clear picture of a hands-on intrusion. OverWatch was able to leverage this aggregate view to rapidly identify and escalate the intrusion to the victim organization, which in turn enabled the victim to contain the adversary before they could complete their mission. 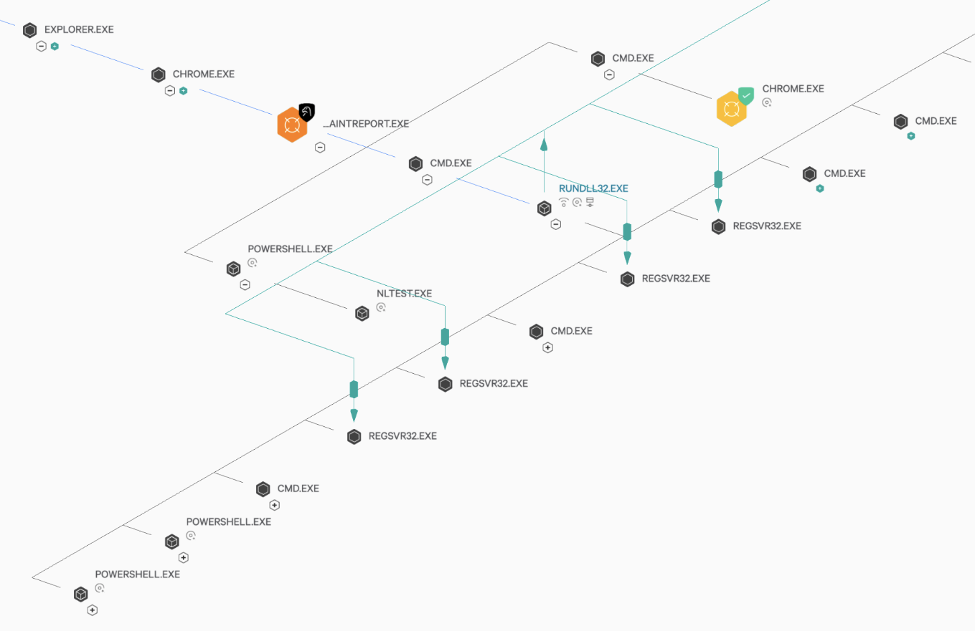 Windows Background Intelligent Transfer Service (BITS) is a file transfer mechanism used by some applications to transfer files using only idle bandwidth. BITS jobs are used to schedule these file transfers and can be used by adversaries to download and execute files. BITS jobs are appealing to adversaries trying to covertly upload or download files because they are ubiquitous within many environments and commonly used in a legitimate administrative context.

The next example also examines WIZARD SPIDER activity, which reflects just how prolific this group has been in the past year, and the variety of techniques they have used. In this intrusion, OverWatch observed WIZARD SPIDER using BITS jobs during an attempted Ryuk ransomware deployment.

The following command line highlights one such attempt to use BITS jobs to push the Ryuk ransomware binary. WIZARD SPIDER scheduled the operation using BITSadmin, the tool used to create BITS transfer jobs. In this case, it is likely that WIZARD SPIDER intended to infect the domain controllers to improve their chances of extracting payment.

During this intrusion, WIZARD SPIDER appeared to focus on a distinct set of objectives and set scheduled tasks to attempt this BITSadmin transfer of Ryuk routinely using Windows Management Instrumentation (WMI). WMI is often seen during hunting operations as a way for adversaries to perform local and remote command execution. This is also another example of a native tool used in normal operations by administrators, a further indication of their comfort in using native tools to carry out their intrusion.

OverWatch identified this activity due to observing globally rare BITS transfer commands alongside anomalous administrative tool usage, one of which was WMIC. When it comes to isolating potentially malicious tool usage under valid accounts, human hunters are best placed to investigate the surrounding context that helps distinguish between what could be legitimate or illegitimate.

So far this year, OverWatch has identified more than 60 defense evasion techniques and subtechniques being used by adversaries in the wild during interactive intrusions. These techniques are explicitly designed to evade technology-based defenses, and as seen in the examples explored here, they leverage native utilities in an attempt to blend in with expected activity.

The OverWatch SEARCH methodology draws together human expertise, systematic processes and world-class technology to continuously refine hunting activity and stay a step ahead of the threat. In combination, these elements enable OverWatch to quickly effectively identify covert activity and notify victims in near real time.

A crucial step in the SEARCH methodology is “Hone” — the stage at which new hunting findings are operationalized as hunting leads or fed back into the platform as detections to drive continuous improvement. Each new find paints a clearer picture of adversary activity and enables threat hunters to redouble their efforts hunting for evasive techniques that cannot be found by technology alone. OverWatch recommends that defenders employ a systemic approach — such as the SEARCH methodology — to derive maximum value from hunting efforts.

With such a wide variety of defense evasion techniques at adversaries’ disposal, it is critical for defenders to remain informed of the techniques that adversaries are currently using to try to hide in victim environments.