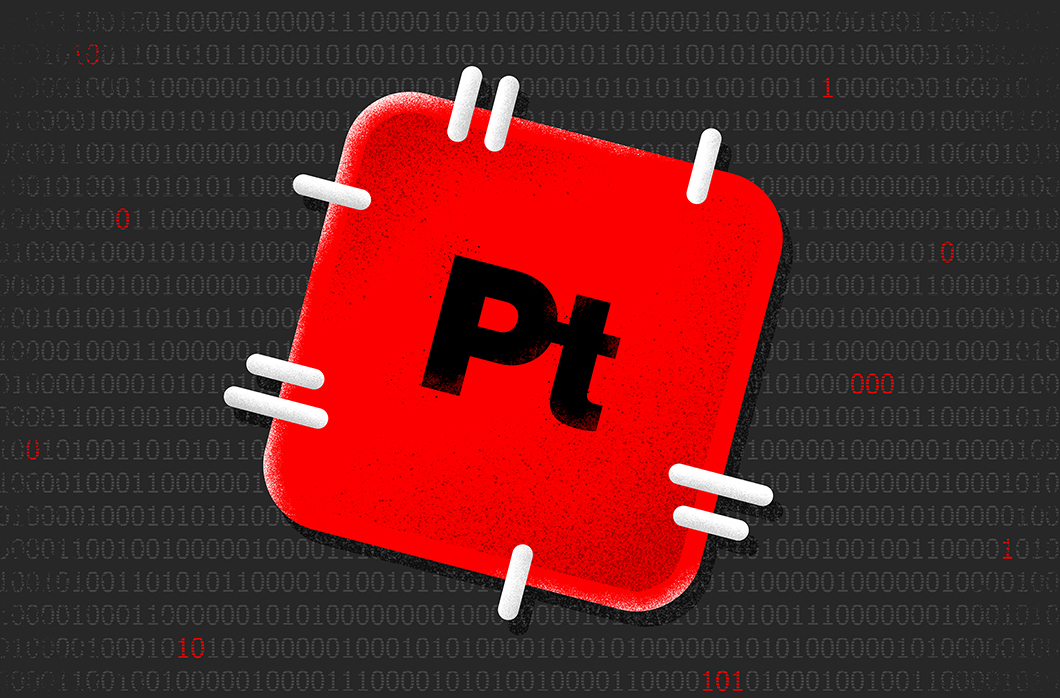 The year 2021 has required a lot of attention from cyber-savvy Microsoft users so far, considering the quantity and severity of vulnerabilities requiring updates and also the increased urgency to release updates for vulnerabilities that several threat actors have been actively exploiting.

This month is no different. For April’s Patch Tuesday, 108 vulnerabilities have received updates, and of those, 19 were flagged as critical, and at least one of them (CVE-2021-28310) has seen exploitation in the wild. This latest zero-day vulnerability has been reported by security vendors but is not currently attributed to a specific advanced persistent threat (APT) group.

Our April 2021 blog also covers a Kerberos Key Distribution Center (KDC) vulnerability, CVE-2020-17049, which is in the second phase of updates. In addition, we discuss updates for vulnerabilities within Win32k, SMB, TCP/IP and RPC. Other applications include Microsoft Exchange, Visual Studio Code, Microsoft Office and more.

New Patches for 108 Vulnerabilities in April 2021

This year has seen a steady increase in the proportion of updates for remote code execution vulnerabilities — 51% in April vs. 38% in February and 46% in March. In the past three months, privilege elevation attack risks have also seen a large percentage of updates, as shown in Figures 1-3. See our February 2021 Patch Tuesday and March 2021 Patch Tuesday blogs for more analysis. 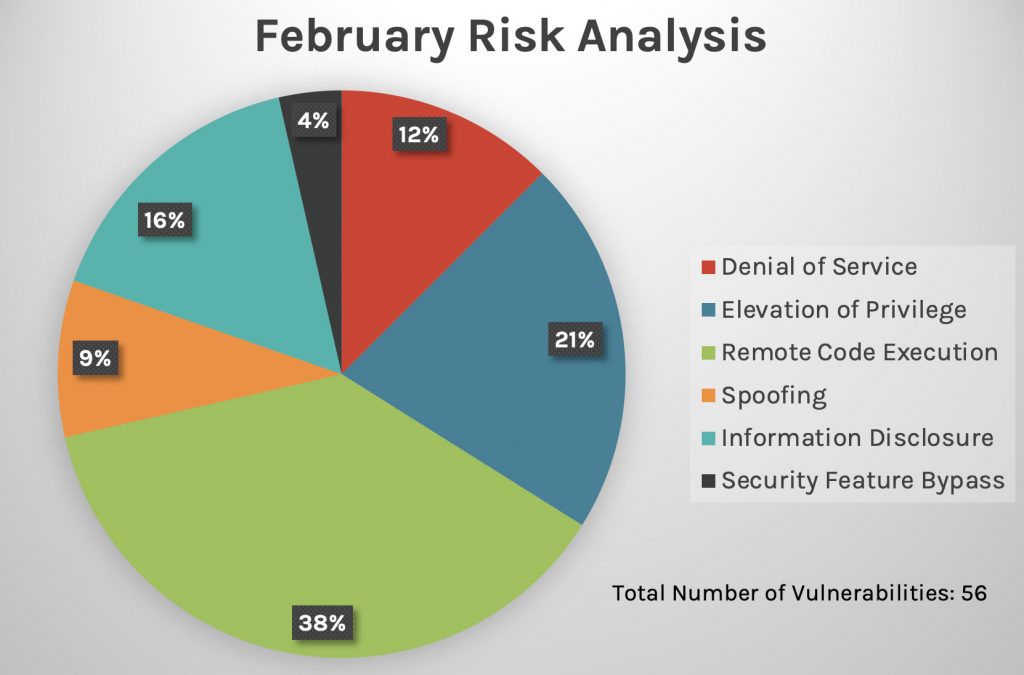 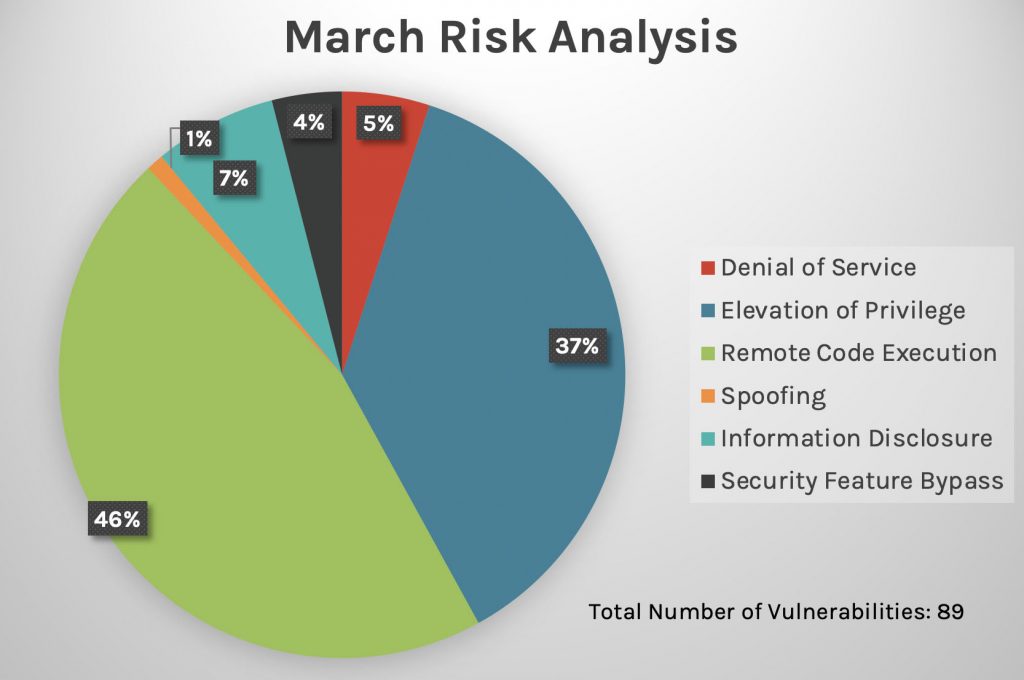 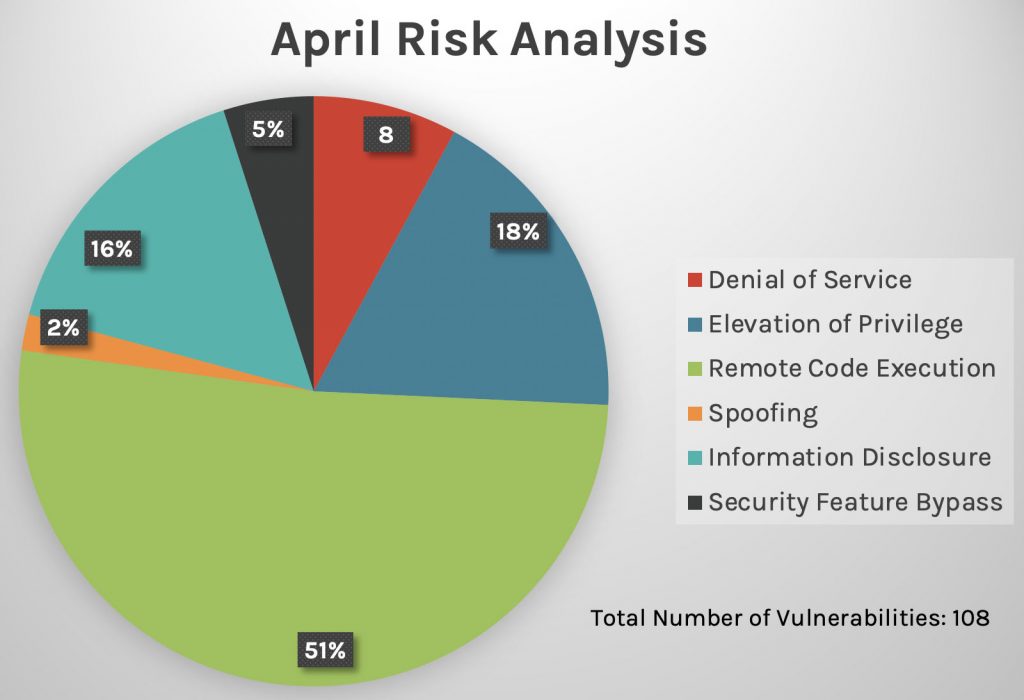 CVE-2021-28310, an out-of-band (OOB) vulnerability found within a dynamic link library (DLL) that is part of Desktop Window Manager, has been confirmed to have active exploitation in the wild. Some sources speculate that the exploit may already be in use by multiple threat actors and is possibly being used by the BITTER APT group to target Pakistani nationals.

Note: An explanation of CVSS scores is included at the end of this blog.

CVE-2020-17049 is a type of security feature bypass vulnerability within Kerberos KDC. A compromised service configured to use KDC could be tampered with by a service ticket that is not valid for delegation in order to force KDC to accept it.

It appears the release of this update removes the need to adjust the “PerformTicketSignature” setting to enable protection on Active Directory domain controller servers, as described in KB4598347. Support for Windows Server 2008 SP2 and Windows Server 2008 R2 has also been added.

There are three phases for patching this vulnerability: The first phase of updates occurred in November 2020, the second was released in this Patch Tuesday update, and the last phase — which will mandate Enforcement Mode, thereby permanently enabling protection — is scheduled to arrive in July 2021. Therefore, if you only have installed updates in November 2020 for KDC, you will need to continue the patching process as this service continues to be compromised by adversaries.

Fortunately, none of these vulnerabilities has seen exploitation. To protect against vulnerabilities such as these, CrowdStrike analysts have shared how Falcon Complete™ can stop exploits seeking to compromise Microsoft Exchange servers.

This month, Microsoft Visual Studio Code received patches to update nine vulnerabilities, all of which could lead to remote code execution exploitation. Some of the vulnerabilities are present in plugins and tools, including those for integrating with GitHub, Maven and Kubernetes.

Other important vulnerabilities to be aware of:

Everything You Need to Know About Securing Containers With Falcon

Containers provide a wide range of benefits to both developers and system administrators — increased agility,…

The Maturation of Cloud-native Security: Securing Modern Apps and Infrastructure

More than ever, organizations are grappling with how to secure cloud-native applications. Protecting these applications —…

Enhanced Industrial Threat Detection: Get Early Warnings of Adversaries in Your Enterprise Networks

In our interconnected world, the growth of threats to industrial control systems (ICS) and operational technology…