Threat hunting is a critical security function, a proactive measure to detect warning signs and head off attacks before a breach can occur. Scaling threat hunting capabilities involves quickly deriving actionable intelligence from a large number of behavioral data signals to identify gaps and reduce time to respond. CrowdStrike has developed a new, open-source tool that is a valuable addition to the arsenal of threat hunters — those cybersecurity professionals who face the challenge of staying ahead of ever-evolving threats.

Using the MITRE ATT&CK Framework to organize and prioritize its findings, the Sandbox Scryer tool leverages sandbox detonation output to provide key information, including observed MITRE ATT&CK techniques and associated metadata. It can do so at scale, allowing researchers to send hundreds or even thousands of files to a sandbox. Sandbox Scryer produces a layer file that can be imported into the ATT&CK Navigator for analysis (including graphical representation of techniques used), and provides a human-readable format for manual examination.

Defending against advanced and sophisticated threats requires answering the question “What’s next?” after an initial detection. Understanding how threats behave and evolve enables defenders to improve defensive capabilities to identify and prevent future attack attempts and stages.

Threat behavior data coming from sandbox detonations can help provide the needed signal to inform focused answers to the question “What’s next?” Sandbox Scryer allows threat hunters to easily scale their investigations by sending a large number of samples to a sandbox at once and building a comprehensive profile that shows the tactics, techniques and procedures (TTPs) being used so protection gaps can quickly be identified, enhancing intelligence and threat hunting operations.

Sandbox Scryer supports the prioritization of IOCs and ATT&CK behaviors and produces information that can easily integrate into SOC and security orchestration, automation and response (SOAR) operations at scale, improving defensive capabilities.

For example, having a heat map that visually depicts a technique such as the use of Remote Desktop Protocol (T1021.001) being shared across all samples submitted for analysis enables analysts to take immediate action and improve their defense posture by enabling identity protection mechanisms or additional policies.

For another example, consider that most endpoint detection and response (EDR) and extended detection and response (XDR) solutions support threat hunting by ATT&CK Techniques. Using Sandbox Scryer to combine multiple reports can reveal common techniques that can be included in a hunting package to search for similar threats in the enterprise.

Sandbox Scryer helps organize and express the plethora of sandbox behavioral data so analysts can better understand and respond to attacks. Its primary output is a layer file analysts can import into the MITRE ATT&CK Navigator. This layer file collates data from the sandbox results using the set of sample submissions analyzed and includes metadata and a ranking of ATT&CK techniques.

Besides being importable into the Navigator, the layer file is also a human-readable (JSON) format usable by itself for examining the collated data. In fact, it may be easier to examine details of the metadata noted in the layer file from techniques of interest than by viewing in the Navigator.

In addition to generating the layer file, Sandbox Scryer creates custom output for each sandbox submission report analyzed. This output consists of:

How to Use the Sandbox Scryer Tool

Usage begins with submitting a selected set of samples for detonation to the free Hybrid Analysis malware analysis service and then retrieving detonation results in the form of report summaries.

This is done either using the Hybrid Analysis web user interface or through the documented and available endpoint API. The Sandbox Scryer tool retrieves the output (submission reports) using the endpoint API. The tool could be expanded to handle submitting samples and retrieving results directly, as a later enhancement. 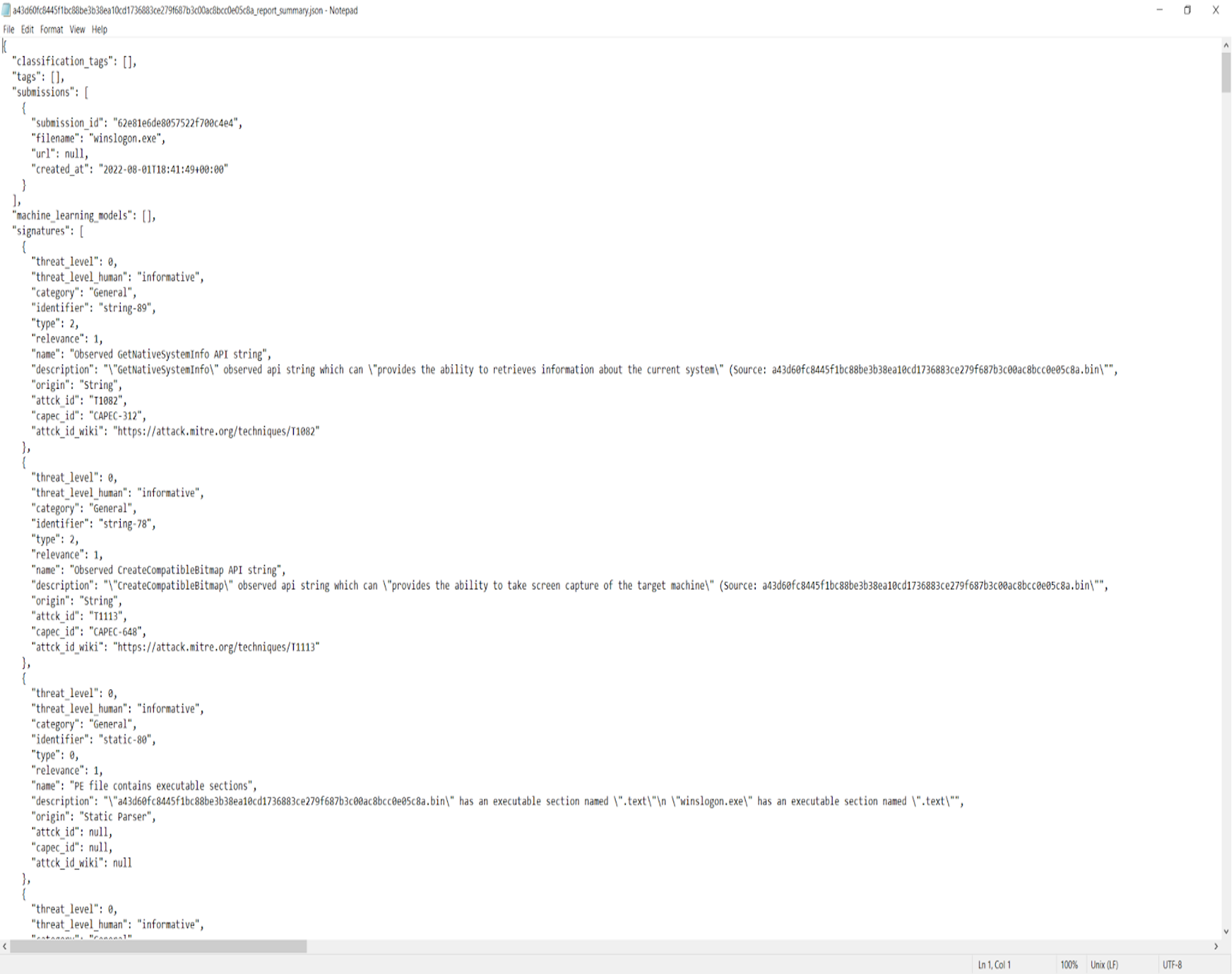 The report summary includes entries for sandbox signatures that triggered processing the submission. Metadata is included for each triggered signature and detected MITRE ATT&CK technique usage.

Once the sandbox report summaries are retrieved for the submissions, the Sandbox Scryer tool is invoked for each report summary with the parse command specified via command-line arguments. This command will parse the report summary and extract the MITRE techniques from the detonation report, along with a subset of metadata for these techniques. It will produce a .csv file with this data, a corresponding human-readable format of the data and graphical representation of the techniques in the format of the MITRE ATT&CK Framework. 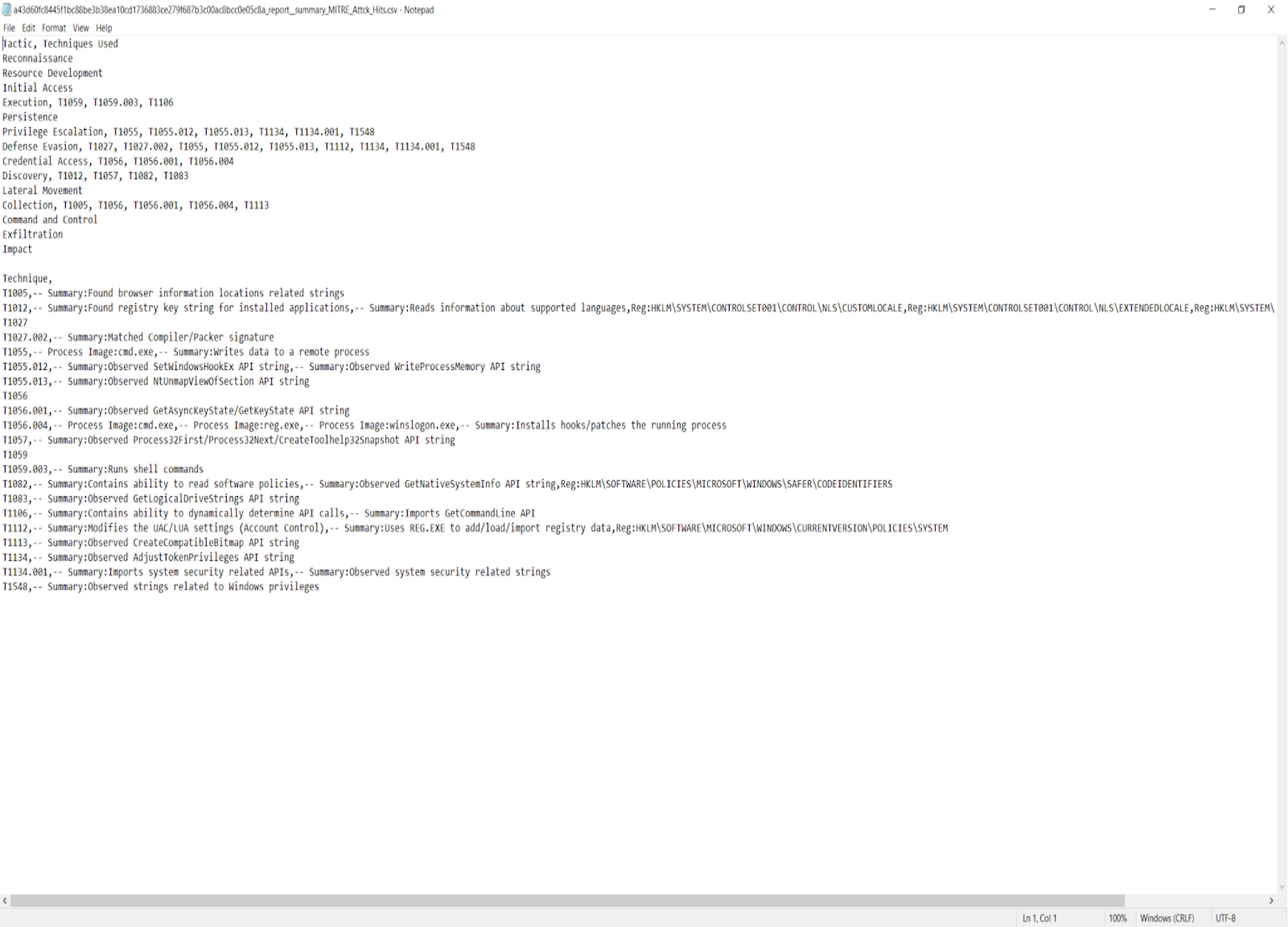 Finally, Sandbox Scryer is invoked with the collate command to collect the extracted MITRE data from each report summary and combine it into a layer file that can be imported into the MITRE Navigator.

Following this, the MITRE ATT&CK Navigator may be launched to load the layer file and view the collated data. 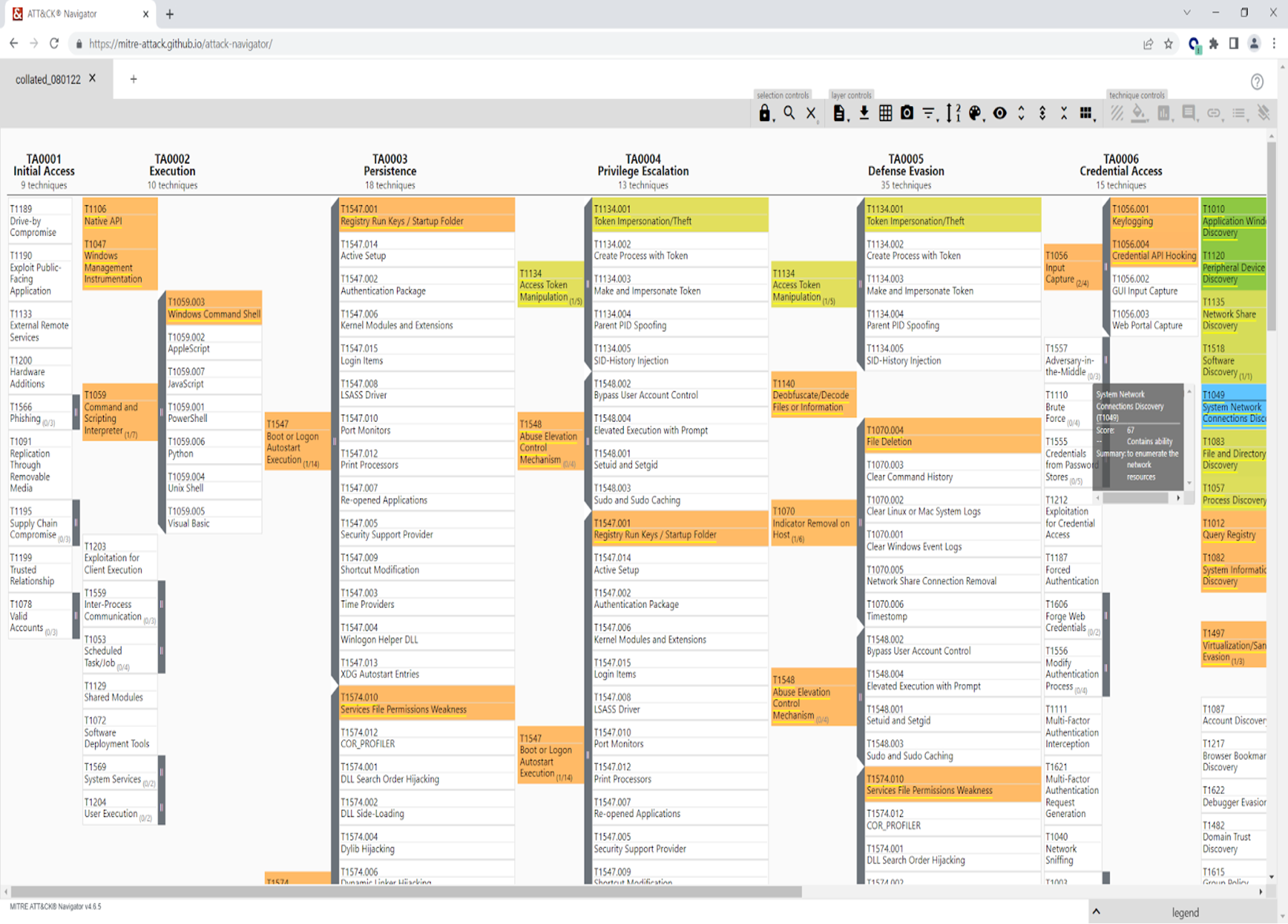 The Navigator shows a view of the techniques and tactics observed by Sandbox Scryer while analyzing a set of submitted samples, with prevalence and prioritization shown via a heat map. This graphical view allows for easier human understanding of trends and priorities within the set of samples.

Hovering over techniques shows noted metadata such as the score used to generate the heatmap coloring, Windows Registry paths involved and more.

To analyze a particular technique more completely, an analyst would return to the sandbox report summaries and search for signature entries that note the MITRE technique, using grep or any similar tool.

The report summaries located within the search contain a complete set of metadata for the signature(s). This includes the technique (what is included in the Navigator view and other Scryer tool output is a subset of available metadata). More than one signature may note the technique. Additionally, other signatures triggered for the submission may be examined along with their metadata.

It’s worth noting that the output from the Sandbox Scryer tool can be sent to other tools for additional analysis.

Cybersecurity professionals interested in threat hunting and attack analysis leveraging sandbox output data can grab the Sandbox Scryer tool from the GitHub repository and start using it as part of their toolset.

The repository contains additional details on how the tool operates, its source code, test data and corresponding output. Collaboration and feedback is welcome, so please see the tool for contact information on how to get in touch.

See Demo
Defense Against the Lateral Arts: Detecting and Preventing Impacket’s Wmiexec
Register Now to Join Us in Las Vegas for Fal.Con 2022