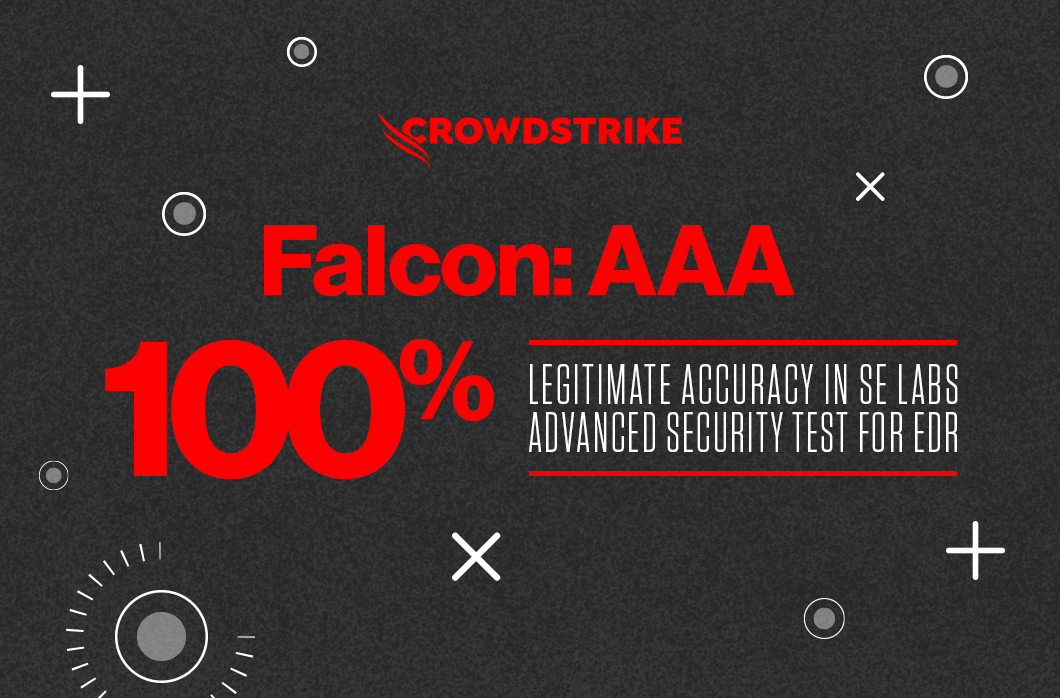 CrowdStrike remains committed to our mission to stop breaches, and regularly participating in independent third-party evaluations enables us to build better and more relevant capabilities to detect and protect customers from sophisticated attacks.

Realistic testing of advanced security solutions involves more than just simulating complex attack chains used by sophisticated adversaries and assessing detection capabilities. It also requires testing for false positives on whether detections during each stage of the attack chain are accurate and indicative of malicious behavior. Failure to test for incorrect detections or false positives transforms the test into a log decoration competition where security vendors are awarded for how many alerts they trigger and how they describe those alerts, rather than rewarding them for the accuracy of those alerts.

In the latest SE Labs Advanced Security Test, evaluation was done with preventions disabled in the product so testing can progress, similar to MITRE ATT&CK® evaluations. With preventions enabled, each kill chain would be stopped almost immediately, and no measurement of later kill chain stages would be possible. Using the MITRE ATT&CK framework to decorate threat chains performed by four adversary groups (Dragonfly & Dragonfly 2.0, APT34, FIN7 & Carbanak, and APT29) across 16 different APT-style attacks, the evaluation examines how security solutions detect and track all elements of a sophisticated attack chain.

Testing scenarios results revealed that Falcon offers complete insights into relevant elements of an attack, detecting and providing visibility across multiple attack stages. Falcon achieved outstanding detection scores from detecting the initial stages of an attack — such as delivery and execution — to relevant attacker actions, such as privilege escalation and lateral movement.

This is the first public test to leverage CrowdStrike’s new Zero Trust module, Falcon Identity Threat Protection. The module uses the power of the CrowdStrike Security Cloud, and integrates with domain controllers and multifactor authentication (MFA) providers to identify threats that use identities in malicious ways.

In the eCrime ecosystem, access brokers sell identity credentials stolen from various organizations (both corporations and government entities), either on criminal forums or through private channels. According to the CrowdStrike 2021 Global Threat Report, one of the top techniques used by eCrime adversaries is to use stolen credentials with RDP (Remote Desktop Protocol) or WMI (Windows Management Instrumentation), some of the most prevalent lateral movement techniques for gaining access across the infrastructure.

With CrowdStrike Zero Trust, organizations can detect when an identity is abused and then stop adversaries’ reconnaissance, lateral movement and persistence within their networks without interrupting business operations. Falcon Identity Threat Protection is an invaluable addition to any Falcon deployment.

Commitment to Testing and Track Record of Success

CrowdStrike Falcon® recently won the SE Labs “Best Endpoint Detection & Response” 2021 award, winning it for the second time since SE Labs introduced it in 2020. To date, Falcon has won 12 consecutive AAA ratings in Enterprise Endpoint Protection reports from SE Labs since March 2018. Further, CrowdStrike was named a strategic leader in AV-Comparatives Endpoint Protection and Response tests by AV-Comparatives and a leader in the Gartner Magic Quadrant for Endpoint Protection Platforms (EPP), reflecting a long track record for outstanding results and commitment to testing transparency, and we continue to remain fully committed to supporting independent third-party efforts.