On April 30, 2013, CrowdStrike was alerted to a strategic web compromise on a US Department of Labor website that was redirecting visitors to an attacker’s infrastructure. Eight other compromised sites were also reported to be similarly compromised with the data suggesting that this campaign began in mid-March.

The campaign appeared to exploit visitors to these sites via the recent CVE-2012-4792 vulnerability, however CrowdStrike recently learned from other researchers that the exploit leveraged appears to be a zero-day. Successful compromise resulted in infection with Poison Ivy. The sample observed infecting visitors to the Department of Labor website was conime.exe file (MD5: 8f287f2bc83a8df06a39020f25cd91da) with a build timestamp of April 6, 2013 at 17:53:18 UTC. The RAT attempted to connect to a C2 server at microsoftupdate.ns1.name on TCP ports 80, 443, 53, and 8080.  This domain has been seen pointing at two IPs: 173.254.229.176 and 13.58.46.78. It uses a password of “japan092wsx$RFV” to authenticate itself at the backend and installs a mutex named “)!xdrA.I4.”

Analysis of logs from the malicious infrastructure used in this campaign revealed the IP addresses of visitors to the compromised sites which showed hits from 37 different countries.  Here is the breakdown of these IP addresses by region: 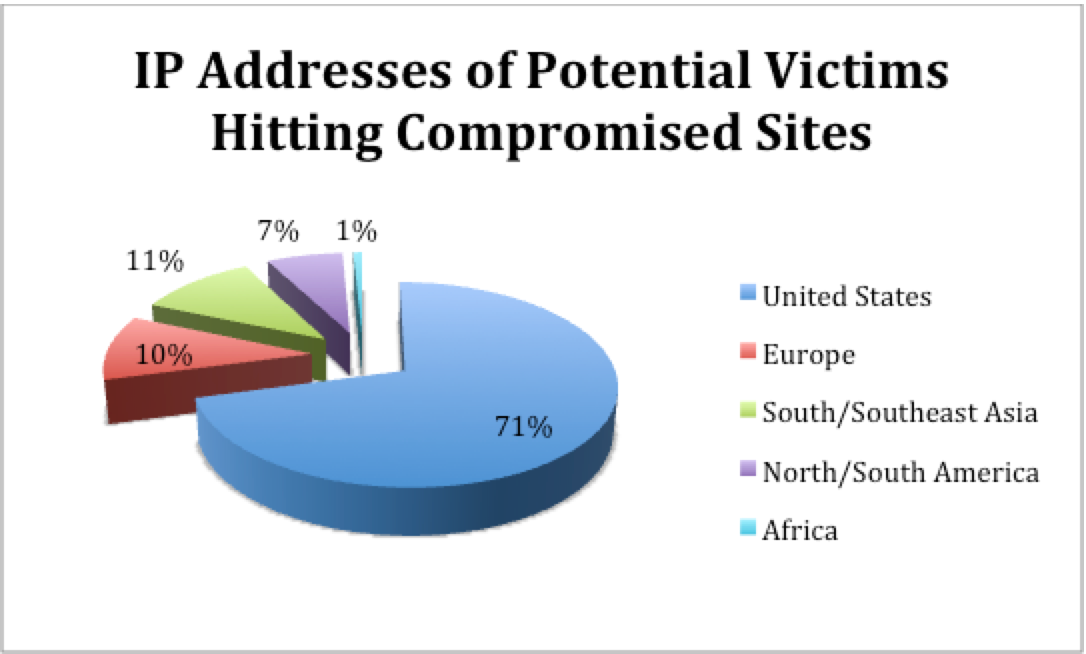 The legitimate sites compromised to deliver malicious code in this campaign give an indication into targets of interest.  The specific Department of Labor website that was compromised provides information on a compensation program for energy workers who were exposed to uranium.  Likely targets of interest for this site include energy-related US government entities, energy companies, and possibly companies in the extractive sector.

Based on the other compromised sites other targeted entities are likely to include those interested in labor, international health and political issues, as well as entities in the defense sector.

The following Snort signatures will enable you to detect the Poison Ivy RAT used in this attack.

Be sure to follow @CrowdStrike on Twitter as we continue to provide updates on this topic. If you have any questions about this incident or the tradecraft used by these adversaries, please contact: intelligence@crowdstrike.com to inquire about our intelligence-as-a-service solutions where we provide actionable intelligence feeds and analysis of targeted attackers and their capabilities.