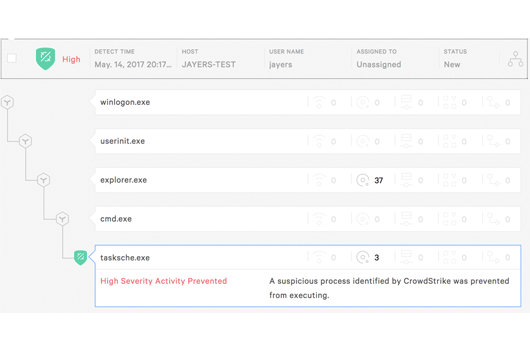 In this screenshot example from the Falcon UI, the detection process tree shows that the malicious file associated with WannaCryptor was launched from explorer.exe.

The global ransomware attack that hit multiple countries on Friday, May 12, 2017 continued to spread over the weekend  with new attacks in Japan, South Korea and Taiwan among other countries. In the United States, the President has asked the Homeland Security advisor to coordinate efforts to respond to the attacks and find those responsible. The attacks are estimated to have affected hundreds of thousands of computers with far-reaching effects across a wide range of industries.

CrowdStrike Falcon Intelligence™ identified this new variant of Windows ransomware, named Wanna or WannaCry, and observed it quickly spreading across multiple countries, after first being reported as an attack on England’s National Health Service on Friday. According to CrowdStrike VP of Intelligence Adam Meyers, this ransomware is complex and challenging because it’s basic structure can be easily modified by criminal hackers, making it difficult to trace. This also contributes to its staying power, as modifications to the WannaCry variant are likely to crop up for some time to come.

Fortunately, CrowdStrike® customers are protected against this ransomware variant with exclusive technology in the CrowdStrike Falcon® platform. Falcon’s advanced endpoint protection offers next-gen antivirus that incorporates machine learning augmented with behavioral analysis that looks for indicators of attack (IOAs) — detecting suspicious behavior before an attack occurs. These prevention features, if enabled, will block the WannaCry ransomware and keep it from executing and encrypting the target organization’s data.

The WannaCry ransomware attacks have been extensive, targeting healthcare organizations, including doctor’s offices and hospitals, as well as telecommunication systems and gas and electric companies. Early infection reports originated in Europe but have since spread across the United Kingdom, Spain, Russia, Pakistan, and many other regions.

Meyers explains that this attack vector has all the hallmarks of a traditional computer worm with the capacity to replicate itself, but he says it is quite unique for such a massive ransomware campaign to use self-propagating techniques at this scale.

Meyers advises that organizations act quickly to ensure they are not impacted by this wave of attacks. He recommends that swift action to patch against Windows exploits is critical (the EternalBlue exploit is patched by MS17-010), as is ensuring that backup data files are disconnected from the core network.

For more information on how the CrowdStrike Falcon platform defends against ransomware and other modern attacks, read the white paper, “Ransomware, a Growing Enterprise Threat.”

Learn how to protect your organization from ransomware