Microsoft has released its October 2021 updates covering a garden variety of vulnerabilities that threat actors can exploit using several attack types, from remote code execution to spoofing to privilege elevation and more. An active zero-day, CVE-2021-40449, should be one of the first that organizations prioritize in their patching cycle, and other vulnerabilities with Microsoft priority rankings should also be considered.

SecOps staff should carefully review the rankings that Microsoft and the National Vulnerability Database have provided for these vulnerabilities — some should be elevated beyond the industry-standard Common Vulnerability Scoring System (CVSS) rating assigned. But, additional review can be challenging for organizations, especially those with limited time and resources. Falcon Spotlight’s™ newly announced feature, the ExPRT.AI model, will help with that — it will be available to all Falcon Spotlight™ customers next week. This ever-adapting model will predict which vulnerabilities are truly critical for your organization to address.

This month’s Patch Tuesday updates include fixes for 74 vulnerabilities. Of these, Microsoft Exchange received four patches for remote code execution vulnerabilities. And, not surprisingly, another actively exploited vulnerability that received an update this month — CVE-2021-40449 — has been exploited using elevation of privilege. Attackers have been capitalizing on it by employing a use-after-free (UAF) vulnerability, which is a memory corruption bug. UAF is enabled by the mechanisms of dynamic memory allocation. If, after freeing a memory location, a program doesn’t clear the pointer to that memory location, an attacker may gain access to the program by capitalizing on that error. Customers can see the detection for this vulnerability within the Falcon Spotlight console.

Other CVEs that received updates are another one affecting the Microsoft Print Spooler Service (the same service affected during PrintNightmare), multiple vulnerabilities for Sharepoint, and a Windows DNS vulnerability. As in September, Windows products and Extended Security Updates (ESU) continue to be the most affected and patched of Microsoft product families (see Figure 2). 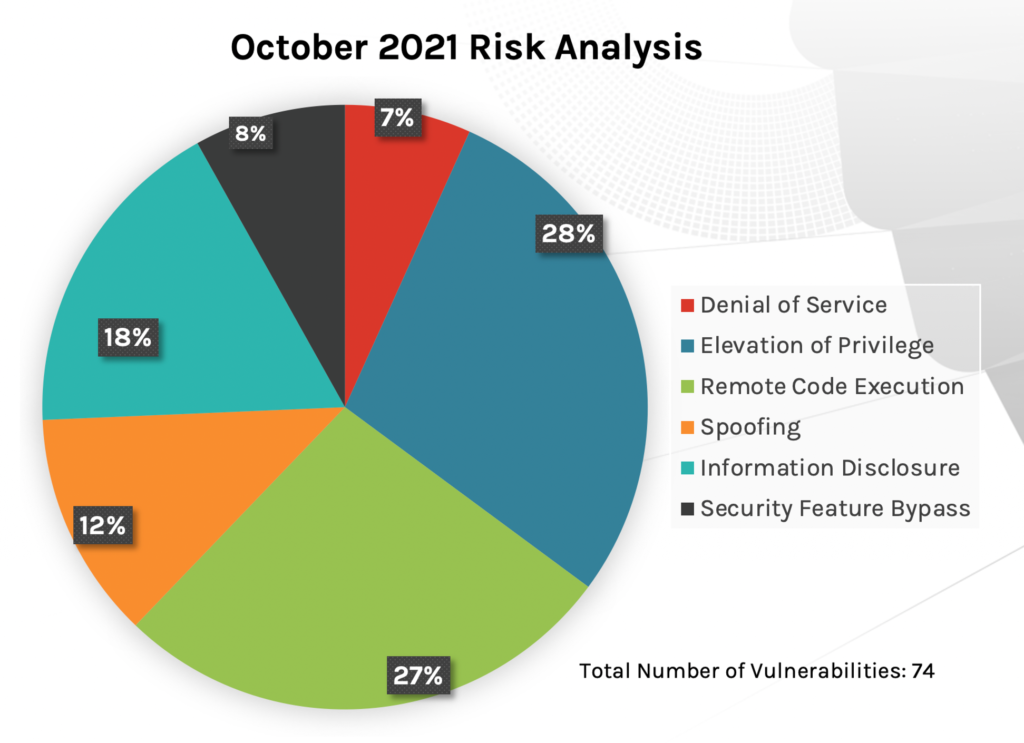 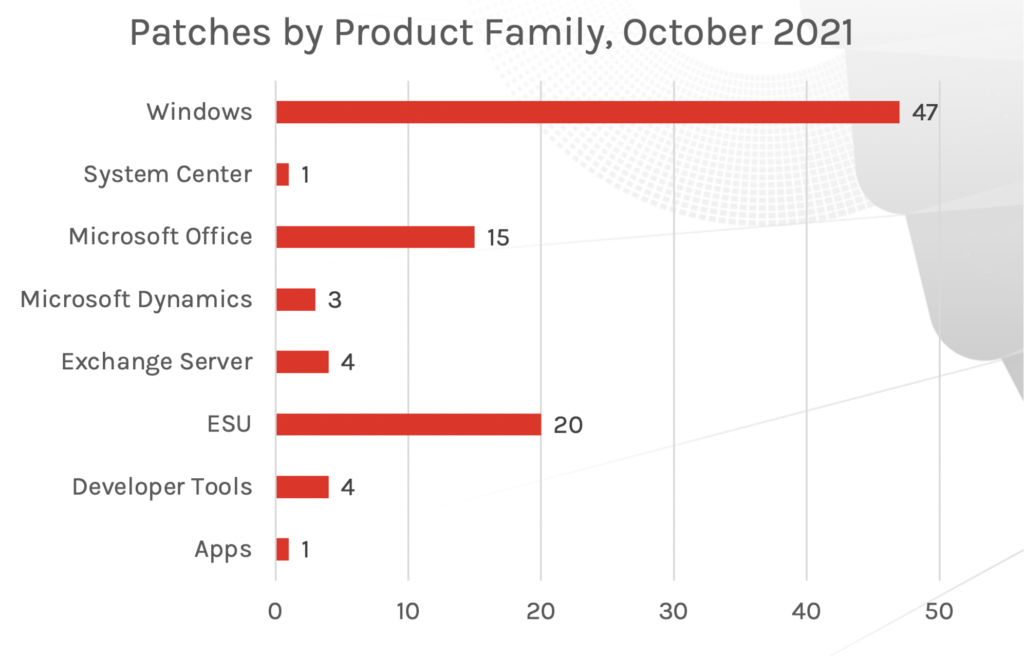 A use-after-free vulnerability affecting Win32k would allow an attacker to escalate privileges on the affected systems. This vulnerability has been reported as exploited by Microsoft, and there are public reports about it being leveraged by a threat actor group.

According to the reporters of this zero-day, the vulnerability resides within the NtGdiResetDC function. Besides this vulnerability, researchers have become aware of two other privilege escalation vulnerabilities affecting Win32k, but these have not yet been exploited and there is currently no knowledge of exploits for them.

Two points to note: Microsoft has rated them as important, and the CVSS Score for all three is 7.8.

Other Critical Vulnerabilities to Prioritize

CVE-2021-40461: This vulnerability was given a rating of Critical with a CVSS score of 8. It occurs on Windows Hyper-V, also known as Viridian. Hyper-V is a native hypervisor, meaning it can create virtual machines on x86-64 systems running Windows. For this vulnerability, attackers use remote code execution to gain access to the system. This vulnerability impacts both Windows 11 and Windows 10 as well as servers.

CVE-2021-38672: This CVE is another Windows Hyper-V vulnerability that has also been given a Critical rating — attackers also use remote code execution to gain access. It affects Windows 11 and Windows Servers 2022.

CVE-2021-40486: As with the above-listed vulnerabilities, attackers also use remote code execution for CVE-2021-40486. For this CVE, threat actors may use the Preview Pane in Windows as an attack vector.

Among other vulnerabilities reported this month, three affect Microsoft Sharepoint, a remote code execution vulnerability affects Windows DNS Server, and one is a Print Spooler vulnerability. CVE-2021-36970 is related to the Printing Service, and while it was given a score of Important by Microsoft, CVSS has scored it as an 8.8. SecOps staff should consider prioritizing the updates for these CVEs.

Among the remaining high-priority vulnerabilities, CVE-2021-41348 is utilized by attackers through privilege elevation, CVE-2021-34453 through denial of service, and 2021-41350 through spoofing.

Recognizing this challenge, CrowdStrike offers a new rating process that not only quickly and more accurately rates vulnerabilities that are important to an organization, it can also predict which vulnerabilities will have the greatest impact in their environment. You can learn more about this new Exploit Prediction Rating via Falcon Spotlight in the announcement blog.

See Demo
Introducing The Nest, by Humio
How to Test Endpoint Security Efficacy and What to Expect