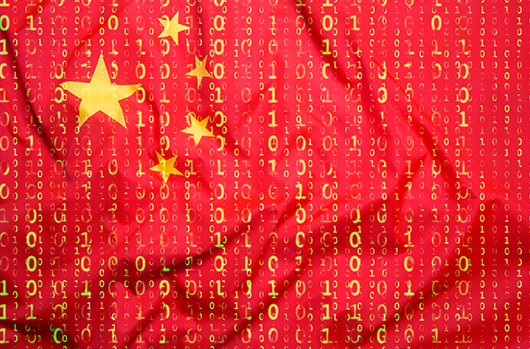 Recently, in July and August 2018, IntrusionTruth has returned with new reporting regarding actors with ties to historic STONE PANDA (APT10) activity and has ultimately associated them with the MSS Tianjin Bureau (天津市国家安全局). Though CrowdStrike® Falcon Intelligence™ is currently unable to confirm all of the details provided in these most recent posts with a high degree of confidence, several key pieces of information can be verified.

More details that may further illuminate these findings and provide a higher confidence in connecting STONE PANDA to the MSS Tianjin Bureau are likely to emerge.

Throughout May 2017, using a variety of historical information and open-source intelligence (OSINT), IntrusionTruth released several blog posts identifying several individuals connected to Boyusec. Though CrowdStrike’s Threat Intelligence team had suspected GOTHIC PANDA was an MSS contractor for several years, the IntrusionTruth posts and subsequent research by RecordedFuture into MSS ties to the China Information Technology Evaluation Center (CNITSEC/中国信息安全测评中心) corroborated additional details from various sources and provided a higher degree of confidence. Confidence in these findings was further boosted when the U.S. Department of Justice named Boyusec and several of the described individuals in an indictment, and detailed GOTHIC PANDA tactics, techniques, and procedures (TTPs) in detail.

CrowdStrike Falcon Intelligence was able to independently verify the majority of this information and concluded that not only is CNITSEC associated with the MSS, but its former director WU Shizhong (吴世忠) was simultaneously dual-hatted as the director of the MSS Technology/13th Bureau (国家安全部科技局局长)1 2 3, implying that the MSS plays a crucial role in China’s code review of foreign products and is now able to cherry pick high-value vulnerabilities from its own capable domestic bug hunting teams. CNITSEC’s role in code review for foreign entities has led to its access to Microsoft’s source code dating back to 2003 and the use by KRYPTONITE PANDA of a high-value vulnerability (CVE-2018-0802), discovered by Chinese firm Qihoo 360, a month before it was publicly revealed. 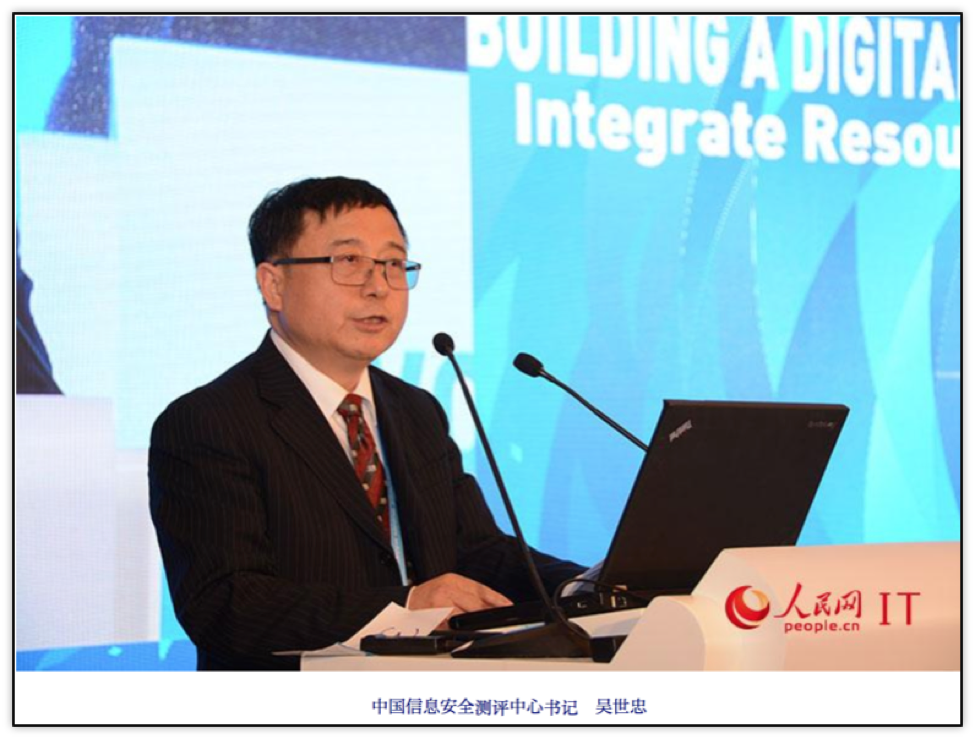 As research into the IntrusionTruth leads on STONE PANDA continues, Falcon Intelligence has already observed some consistencies with known MSS operations.

Many of the personal details for GAO were scrubbed shortly after IntrusionTruth’s post introducing him went live, including his 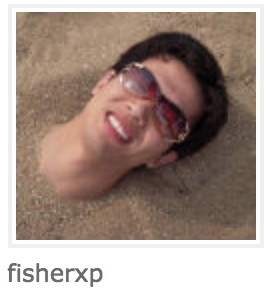 Tencent QQ account. The blog connects him to the moniker fisherxp via an initial spear-phishing campaign from 2010 previously attributed to STONE PANDA. Multiple sites with profile pictures appear to show the owner of the fisherxp accounts, though this has yet to be independently confirmed as GAO. Fisherxp’s QQ shows his alternate username as 肥猪 or “big porker”. IntrusionTruth later links GAO to several documented Uber rides to the MSS Tianjin Bureau’s office address where both his first name, Qiang/强, and 猪 are used by the app to identify him and tie him to the QQ number 420192. CrowdStrike cannot confirm the validity of these Uber receipts at this time.

However, fisherxp’s account on popular Chinese technology forum 51CTO is still active and shows that he has downloaded not only the open-source DarkComet RAT and numerous password cracking tools, but more importantly, several favorite tools used by a plethora of known Chinese cyber adversaries including Gh0st RAT 3.6, zxarps (an ARP-spoofing tool by legacy hacker LZX), and lcx.exe (a port-forwarding tool by legacy hacker LCX)4. 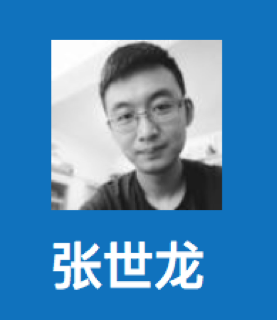 and Trochilus RATs, two open-source tools historically used by STONE PANDA, but the account has since been scrubbed. This information was verified by CrowdStrike before being removed completely. Falcon Intelligence recently independently conducted detailed analysis of the RedLeaves malware used to target numerous Japanese defense groups and found it was directly sourced from Trochilus code, but it has undergone several evolutions and contains prefixes suggesting it could also be used to target Russia and the DPRK. There is no conclusive evidence at this time that RedLeaves is solely attributed to STONE PANDA.

Baobeilong did maintain a Flickr account with numerous pictures that proved key in identifying his location later, similar to how cpyy’s photos helped identify his affiliation to the People’s Liberation Army (PLA) in CrowdStrike’s PUTTER PANDA report.

IntrusionTruth then drew connections from baobeilong’s other online accounts to registrant details for xiaohong[.]org, which dated back to 2007 and revealed ZHANG’s full name—ZHANG Shilong. From there, a trail of overlapping registrant details reveals ZHANG’s hanzi characters for his name (张世龙), likely one of his personal home addresses, potential work addresses and several email addresses:

Specifically tracing registrant details from atreexp → robin4700 → eshilong shows that ZHANG was active registering sites as recently as June 5, 2018, including a personal blog where his picture and name features prominently along with several technology-related blog posts. 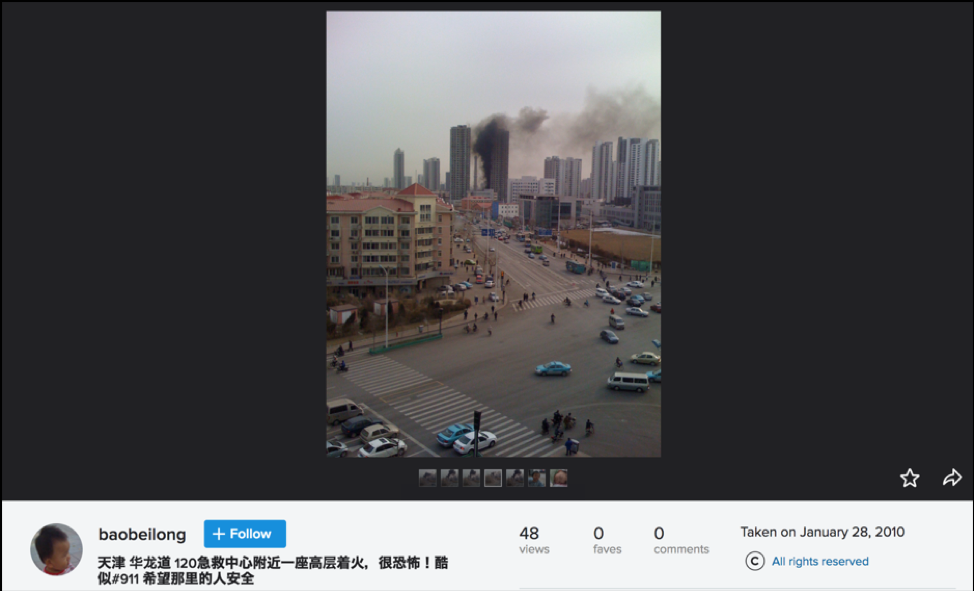 The original blog post on GAO lists his contact information in recruitment postings for two separate companies, one of which is Laoying Baichen Instruments (characters unknown at the time of this writing). No records could be found for such a firm, however, IntrusionTruth lists the address associated with it as Room 1102, Guanfu Mansion, 46 Xinkai Road, Hedong District, Tianjin (天津市河东区新开路46号冠福大厦1102).

During the course of investigating Laoying and the Guanfu mansion, Falcon Intelligence noticed that the Guanfu Mansion is also the registered address of a firm called Tianjin Henglide Technology Co., Ltd. (恒利德天津科技有限公司), which is listed as one of only a few “review centers” certified by CNITSEC in Tianjin5. Laoying and Henglide are listed as being on different floors, however having a CNITSEC review center in the same building is noteworthy given CNITSEC’s connection to MSS and previous linkage to Boyusec/GOTHIC PANDA. 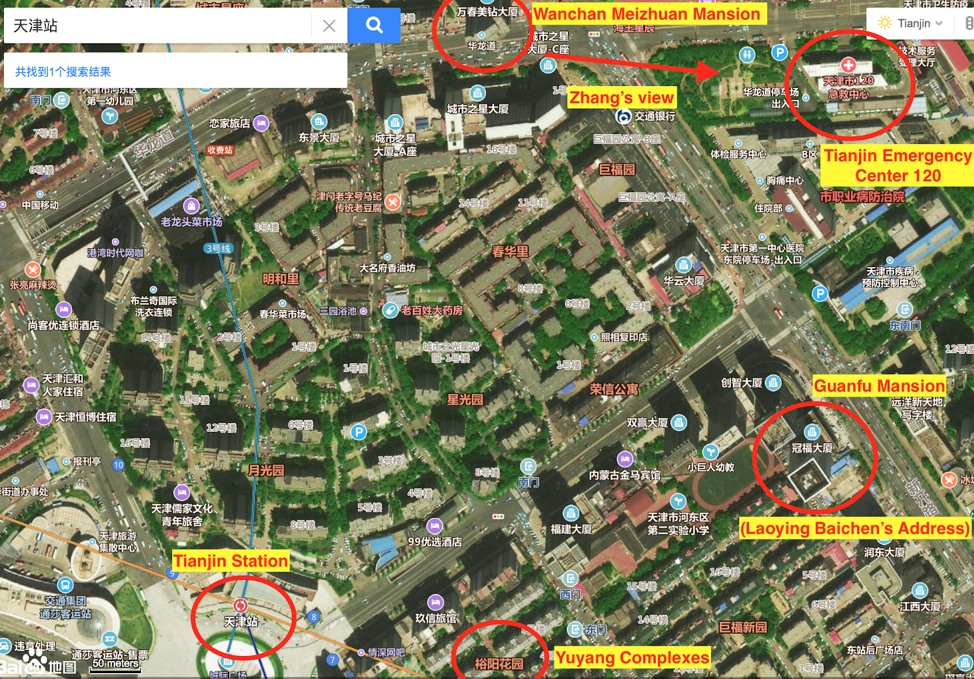 Zhang is believed to have taken the photo of the fire from the Wanchan Meizhuan Mansion. This is relatively close to both the Yuyang Complex (one of Zhang’s listed registrant addresses) and the Guanfu Mansion, Laoying Baichen’s listed address.

The other firm GAO appears to have been recruiting for is Huaying Haitai (天津华盈海泰科技发展有限公司). As the IntrusionTruth blog post mentions, it is a registered firm with two listed representatives, Fang Ting (方亭) and Sun Lei (孙杰), and a listed address of 1906 Fuyu Mansion (天津市河西区解放南路中段西侧富裕大厦1-1906).

Searches for more information on Huaying Haitai turned up two interesting government documents. One is a recruitment Excel sheet detailing recent graduates, their majors and their new employers and addresses. Huaying Haitai is listed as having hired a recently graduated female student from Nankai University in 2013 who majored in Japanese. This is interesting considering STONE PANDA’s extensive targeting of Japanese defense firms after this time period, but it is by no means conclusive evidence that the firm is connected to STONE PANDA.

The second government document lists Huaying Haitai as the co-organizer of a Network Security Attack and Defense competition with the Ministry of Industry and Information Technology’s (MIIT) national training entity, NSACE6. It was open for all students of Henan Province.

NSACE appears to be a national education body that teaches network information security, including offensive activity7. This information is particularly interesting given Boyusec’s previous work at CNITSEC’s Guangdong subsidiary setting up a joint active defense lab8.  It suggests that these technology firms act as both shell companies and recruitment grounds for potential MSS use in cyber operations. 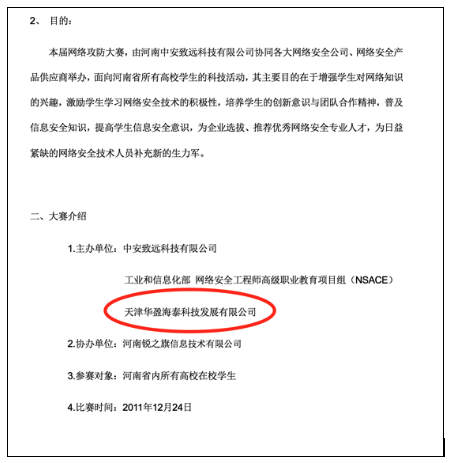 The most recent IntrusionTruth post assesses that GAO’s Uber rides frequently took him from Huaying’s address at the Fuyu Mansion to 85 Zhujiang Road (珠江道85号). 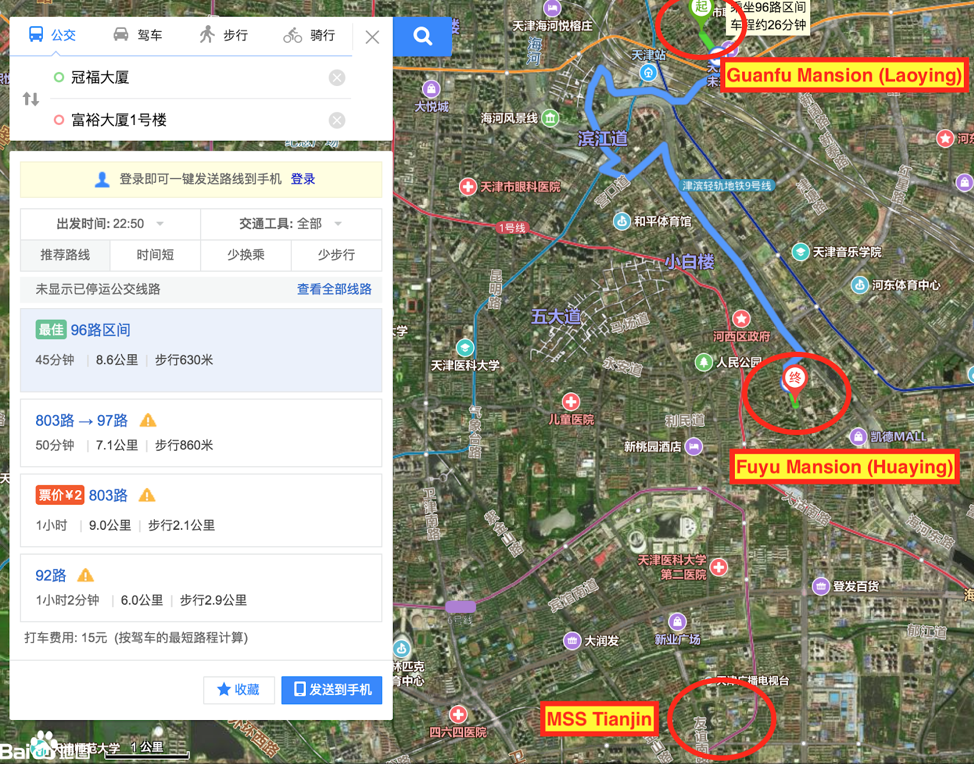 When observed closely, the compound is a striking one complete with towers, a fenced perimeter with surveillance cameras, guarded entrances, and a building with a significant number of satellite dishes. 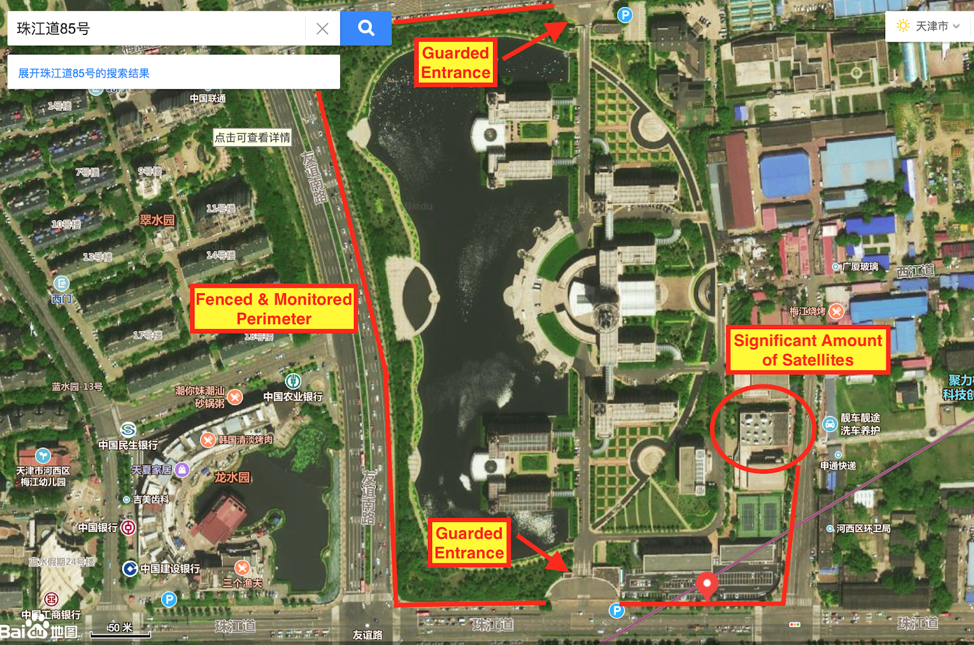 There are no markers on the building and no government listed address; however, it is apparently difficult for locals to determine where the Tianjin Bureau’s location is as well. There are several Baidu questions asking what transportation routes are best to get to that specific address. Three separate ones specifically mention the 85 Zhujiang Road address as the headquarters for the MSS’s Tianjin Bureau and the difficulty in finding its location9 10 11. 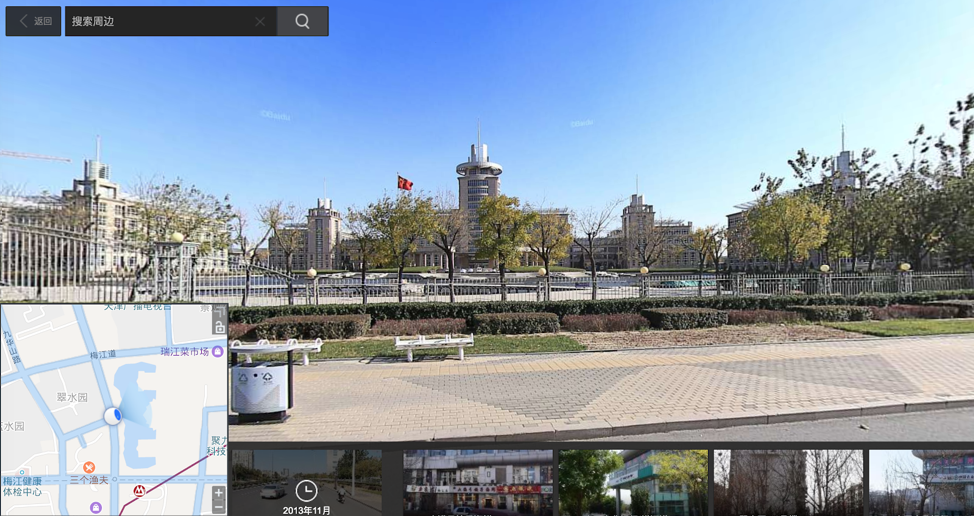 As with most cyber-enabled operations, satellite arrays are often indicative of installations with significant signals intelligence (SIGINT) capabilities. The Tianjin Bureau appears to have the potential for such capabilities, housing several large arrays that appear to have existed since at least January 2004.

There are still significant intelligence gaps that prevent Falcon Intelligence from making an assessment about STONE PANDA’s potential connections to the MSS Tianjin Bureau with a high degree of confidence. However, additional information is likely to materialize either directly from IntrusionTruth or from other firms in the infosec community who are undoubtedly looking at this material as well and may have unique insight of their own. Ultimately, IntrusionTruth’s prior releases on GOTHIC PANDA proved accurate and led to a U.S. Department of Justice indictment resulting in the dismantling of Boyusec. From their latest post, which contains GAO’s Uber receipts, it is clear the group’s information likely goes beyond merely available OSINT data.

It cannot be ignored that there are striking similarities between the entities associated with GOTHIC PANDA and the actors and firms mentioned in the blogs about STONE PANDA. In addition, FalconIntelligence notes that following the late 2015 Sino-U.S. brief cyber detente, much of the responsibility for western cyber intrusion operations was handed to the MSS as the PLA underwent an extensive reform that is still currently underway, and which is consolidating its military cyber forces under the Strategic Support Force.

Though the detente saw an initial drop in Chinese intrusion activity, it has steadily been increasing over the past several years, with a majority of the intrusions into western firms being conducted by suspected contractors. These adversaries are tracked by CrowdStrike as GOTHIC PANDA, STONE PANDA, WICKED PANDA, JUDGMENT PANDA, and KRYPTONITE PANDA. Many of these adversaries have begun targeting supply chain and upstream providers to establish a potential platform for future operations and enable the collection of larger sets of data.

While the APT1, PUTTER PANDA, and Operation CameraShy reports all exposed PLA units at a time when Chinese military hacking against western firms was rampant, the attention has now swung toward identifying MSS contractors. The exposure of STONE PANDA as an MSS contractor would be another blow to China’s current cyber operations given STONE PANDA’s prolific targeting of a variety of sectors, and may prompt an additional U.S. investigation at a tenuous time for Sino-U.S. relations during an ongoing trade war. However, it is important to note that such public revelations often force these actors to cease operations, improve their operational security (OPSEC), and then return stronger than before. As such, CrowdStrike Falcon Intelligence assesses that although Boyusec may have shuttered, elements of GOTHIC PANDA are likely to still be active. The same is likely to be true for STONE PANDA following a period of silence.

For more information on how to incorporate intelligence on threat actors like STONE PANDA into your security strategy, please visit the Falcon Intelligence product page.

Security Researcher Adam Kozy came to CrowdStrike, bringing forward several years of experience in security and threat intelligence analysis from the government sector where he conducted research at both a tactical and strategic level. He is a recognized cultural, political, and security pundit on East Asia and speaks Japanese and Mandarin.

He has delivered presentations and research findings to a variety of key cybersecurity influencers, including senior government officials and private-sector CEOs. He has also been a guest lecturer at several universities on cyber intelligence and recently presented at BlackHat USA on Chinese cyber weapons and monitoring capabilities.