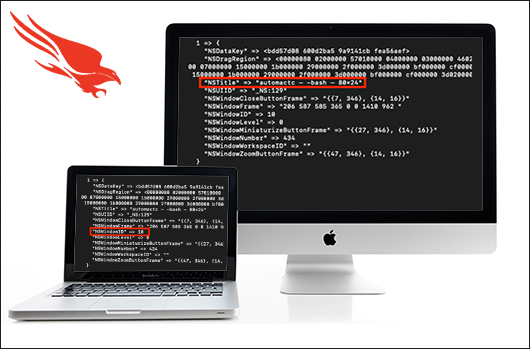 In Mac OSX Lion (10.7), Apple introduced a feature called “User Interface (UI) Preservation”, intended to save the state of application windows and restore them upon future launches. Like many features intended to enhance the user experience, UI Preservation can also provide immense forensic value to an investigator. In the case of anti-forensic measures taken by an adversary, for example, such as disabling the creation of or deleting the standard Terminal history files, the scrollback history for Terminal.app can still persist via UI Preservation. This blog discusses the significance of macOS Terminal saved state files and how to reconstruct these files to identify additional adversary activity during interactive sessions.

CrowdStrike has developed a new module for its open-source Mac forensics triage tool, AutoMacTC, which has the ability to automatically parse the Terminal saved state files on both live systems and forensic images. You can find the AutoMacTC tool in our public Github repo. The following sections detail the structure of the Terminal saved state files as well as a step-by-step breakdown of the process to manually reconstruct the associated Terminal sessions.

When an application has UI Preservation implemented, a directory is created when a user runs the application. The per-application directory path for this activity is /Users/<user>/Library/Saved Application State/<application name>.savedState/.

This per-application directory will typically contain the following files:

The created timestamp associated with each directory and constituent files provides evidence of the first time the application was ever used, while the modified time indicates the most recent usage. Our interest, however, is in the contents of two files: windows.plist and data.data, specifically those found under /Users/<user>/Library/Saved Application State/com.apple.Terminal.savedState/.

The file windows.plist is a binary property list (plist) file that can be parsed with the native macOS command-line tool plutil or opened with XCode. With the command plutil -p windows.plist, the contents can be viewed in human-readable form, an example of this can be seen in Figure 1.

In this example, one field immediately stands out: NSTitle, which includes the title of the Terminal window (automactc, indicating the current working directory), the name of the shell in use (bash), and the size of the window (80×24). The fields NSWindowID and NSDataKey will be valuable for analysis of data.data.

Figure 2: Structure of a PersistentUIRecord section

Moreover, the NSWindowID value can be used to identify the AES-128-CBC key necessary to decrypt the encrypted binary plist data stored in the corresponding PersistentUIRecord section from data.data. The hex-encoded AES-128 key is stored in the NSDataKey field in windows.plist, as shown in Figure 5.

Figure 6: Structure of example data.data PersistentUIRecord. The NSCR header is in yellow, version in green, NSWindowID in blue, and record length in orange

Decrypting the binary plist data with the AES-128 key from the NSDataKey in windows.plist results in a file that contains a NSKeyedArchiver-format binary plist. The beginning of the file structure for this artifact is described in Figure 7.

The next step is to deserialize the NSKeyedArchiver-format binary plist, which can be extracted from the file starting at offset 0x19, exclusive of the padding bytes. The command plutil -p can be used to view the plist in human-readable form. As shown in Figure 8, $top indicates that the contents of TTWindowState are available in key 1 of $objects. 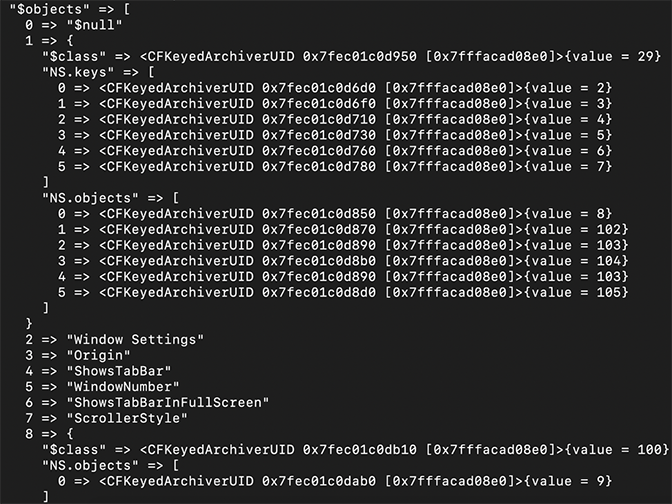 In the example shown in Figure 10, key 9 from $objects contains several key/value pairs, but the data for the following sub-keys under NS.objects is the most pertinent to forensic analysis: 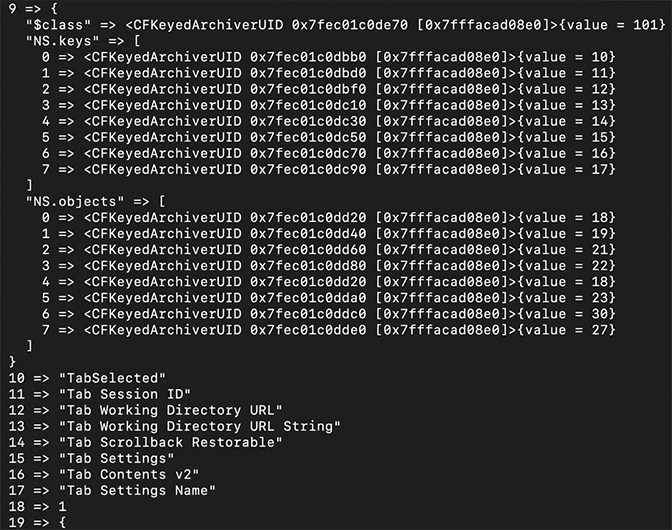 In this example, the values at keys 21 and 22 in $objects, as shown in Figure 11, reflect the current working directory for the Terminal tab in question. Both values should be very similar.

The value at key 30 however, associated with “Tab Contents v2”, contains a set of objects — this data is the most relevant to reconstructing commands from Terminal sessions. In key 30, the values of the NS.objects sub-keys correspond to keys in $objects. For example, the value at sub-key 0 in Figure 12 maps to the data in key 31.

Decoding the hex-encoded value shows the beginning of the user’s Terminal session:

This process can be repeated for the other NS.objects sub-keys in key 30 to rebuild the full terminal session.

It is important to note that this scrollback history does not have timestamps and may be overwritten by normal user behavior if not collected early enough in an investigation. Moreover, an adversary may eliminate scrollback history entirely by unchecking “Restore text when reopening windows” in the Terminal.app settings, as shown in Figure 14. 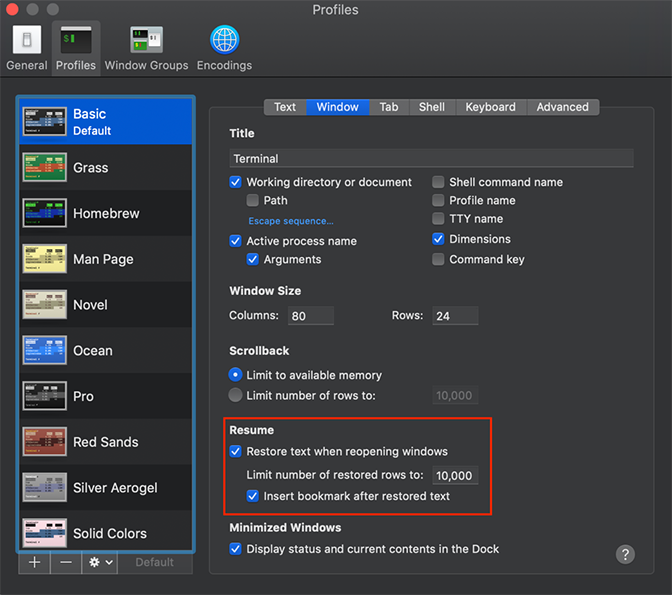 The full contents of multiple Terminal tabs can be recreated by iteratively decrypting and extracting embedded plists from data.data and using the AES keys provided in windows.plist. This level of visibility into Terminal scrollback history can be critically important to forensic investigators as they work to reconstruct Terminal history from interactive adversary sessions. Forensic investigators frequently face situations in which command-line history from either system logs or a real-time monitoring tool is unavailable. Even if an adversary has used the unset HISTFILE command to disable command-line logging, or deleted logs from the system, scrollback history may still be available for analysis.