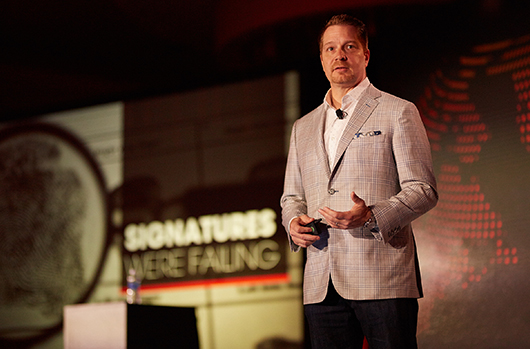 A recent article in Entrepreneur Magazine titled, “I’ve Gone From Entrepreneur to the Corporate World and Back Again. This Is What It Takes to Lead a Company,” offers insights from CrowdStrike® CEO George Kurtz on his fascinating journey from accountant to leader of one of the world’s fastest-growing cybersecurity companies.

The transition started early. Kurtz was only 27 and already a senior manager at Ernst & Young when he was told he was “too young” to be named a partner. Like any ambitious visionary, this was all the impetus he needed to strike out on his own. He teamed up with some former Ernst & Young colleagues to start Foundstone — a security consulting company that was ultimately purchased by McAfee and where Kurtz was to become the chief technology officer (CTO).

His decision to accept the CTO role at McAfee was a pivotal moment that marked the beginning of his passion to build a better cybersecurity platform, “Although I turned down the role two times before accepting the position of CTO, it turned out to be one of the best career moves. It gave me a much better appreciation for how antiquated the industry was,” he writes.

As CTO, he immediately recognized that all the leading antivirus platforms were operating at a deficit by not adopting modern cloud-native architecture. After a seven-year stint with McAfee, Kurtz decided it was once again time to start his own venture – this time one devoted to building a better endpoint security platform delivered from the cloud.  As the article outlines, after seven years, CrowdStrike has grown from humble beginnings to become a global award-winning enterprise that spans 176 countries with technology capable of analyzing over 100 billion events per day. Kurtz’s passion for solving problems became a mission to stop breaches, and that endeavor has continued to progress and expand.

In addition to summarizing Kurtz’s path to his current role as CrowdStrike CEO, the article offers his views on the critical factors that have contributed to his success. These are attributes he believes every modern CEO should consider:

Become a Subject Matter Expert in Your Field

Kurtz points out that many of today’s leaders are “professional CEOs,” meaning they can excel at running a business but are not “industry natives.” He believes that this lack of understanding can have a significant impact on a CEO’s ability to predict both what his customers will want and how the industry is evolving. Kurtz argues that this limits a CEO’s ability to anticipate customers’ needs, as well as to understand how the market might be evolving – impeding his or her ability to be a trusted advisor to the organization’s customer base. “A great CEO knows that you need to focus on the client first, and once you are in that strategic advisor role, it can help you expand your network and gain future clientele.”

He also comments on the value of writing a book – Kurtz’s book, “Hacking Exposed,” is now in its seventh edition. He explains, “Writing a book doesn’t hurt either. It will be your best 500-page business card! We used to have a saying at Foundstone, ‘Do you want the guys who read our book or wrote the book performing your security work?’ The answer was crystal clear.”

Kurtz writes that the Silicon Valley mantra of “Fail fast, fail often,” rings true. “Yes, being fast and aggressive is absolutely critical to a successful startup, especially early on, when you need to out-innovate and outsmart your competitors,” he writes. However, he also believes that if you stop evolving with the technology and trends that are available to you, you can get stuck in a rut. He argues that technology entrepreneurs need to evolve even faster after failures, and they need to have a long-range plan in mind.  “While good companies are those that can excel quickly, the best companies are those that have a long-term vision and know where they are headed,” he writes.

Hiring the Best People Is as Critical as Financials

Kurtz draws a connection between financials and hiring strategy as foundational aspects of success for any organization. He writes, “Since certain business finance fundamentals come down to playing the numbers game well, it’s important for the CEO to hire critical members for your team, who understand and can perform against this basic principle.”  In addition, he’s a firm believer that location shouldn’t dictate who you hire. He writes, “I’ve always focused on hiring individuals based on performance as opposed to location. This business model helped my company to rapidly expand worldwide and harness the brain power of the most qualified people.”

Create a Belief Employees Can Actually Get Behind – Build Your Mission

Kurtz acknowledges that building a successful company requires dealing with stress and constant change, which is why it’s so important that employees are fully committed to their organization’s mission and value proposition. That said, he also explains that for CrowdStrike, he didn’t want a static mission statement but rather a culture where employees could be passionate about the work of stopping “bad guys.”  He writes, “When you have passion, mission and purpose, you have limitless boundaries that unlock immense value to you, your shareholders and most importantly, your customers.”

The article closes with Kurtz’s reflection on his path to becoming a CEO and how he would summarize his advice to other entrepreneurs. “My journey into entrepreneurship wasn’t exactly planned and it hasn’t always been easy, but my advice is simple: Education and evolution are critical, always hire the best, and remain steadfast in believing in the change you and your team can deliver.”

Learn more about the CrowdStrike Story