Microsoft has released 63 security patches for its September 2022 Patch Tuesday rollout. Five vulnerabilities are rated Critical, 57 are rated Important, one is Moderate, and one is rated Low in severity. This month’s release includes a bug discovered by CrowdStrike in conjunction with other security researchers: CVE-2022-37969 is publicly known and there is evidence it has been exploited in the wild.

In this blog, the CrowdStrike Falcon® Spotlight™ team analyzes this month’s vulnerabilities, highlights the most severe CVEs and recommends how to prioritize patching.

This month’s leading risk type is remote code execution (48%), followed by elevation of privilege at nearly 29%, and information disclosure and denial of service, both at 11%. Remote code execution (RCE) vulnerabilities are among the most dangerous and high-impact vulnerabilities in existence. Many major cyberattacks have been enabled by RCE vulnerabilities, including Log4j. Rigorously enforcing the principle of least privilege and knowing where the most sensitive company data is stored are critical for creating a defensive security posture. 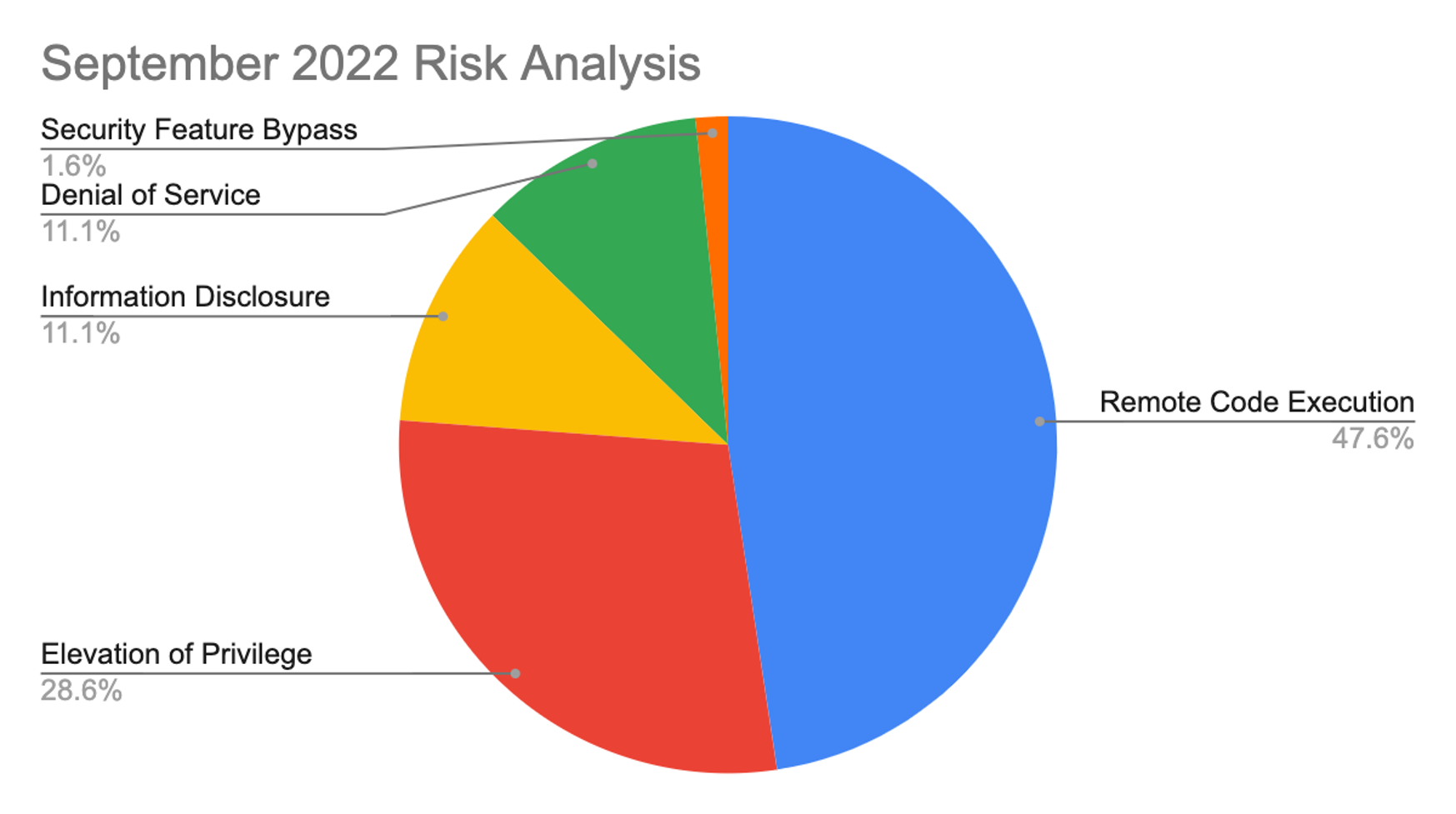 The Microsoft Windows product family received the most patches this month with 48, followed by Extended Support Updates (36) and Microsoft Office products (7). One zero-day vulnerability being used in active attacks is also covered in the update. This CVE affects Windows Common Log File System Driver and is rated as Important with a CVSS of 7.8. 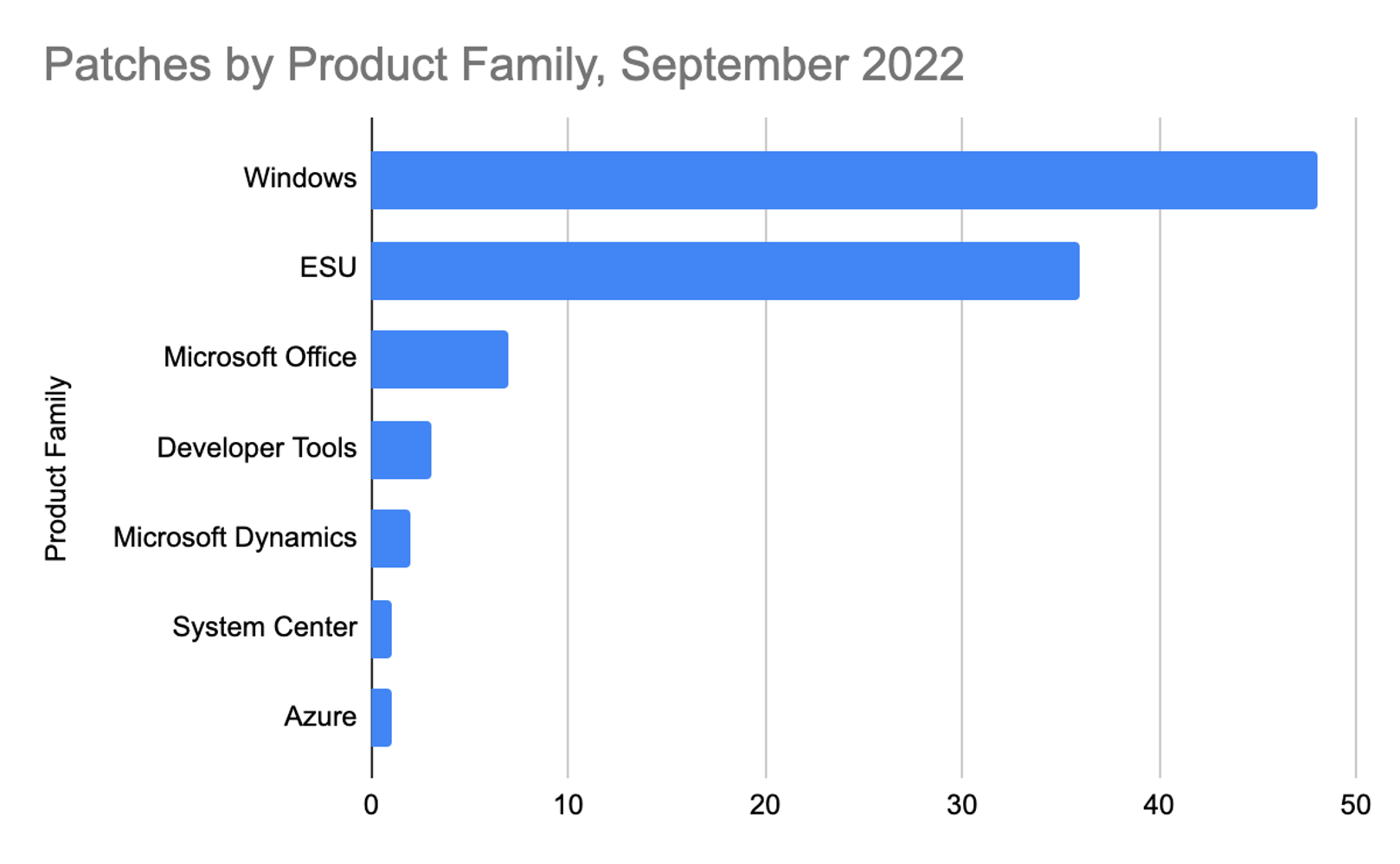 There is a patch available for CVE-2022-37969, an actively exploited vulnerability in Microsoft Windows Common Log File System Driver. CrowdStrike reported this zero-day in a combined effort with other vendors (see acknowledgements section in the Microsoft advisory).

On August 29, 2022, the CrowdStrike Falcon® OverWatch™ threat hunting team observed malicious remote desktop protocol (RDP) activity against a consumer goods company via an undetermined initial access vector, allowing for delivery and execution of a binary. Preliminary analysis of the malicious tool showed it facilitates local privilege escalation (LPE) on fully patched Windows 10 systems; it should be noted that other Windows versions are also likely affected. As shown in Figure 3, this CVE is ranked as Important.

The two Important vulnerabilities affecting Windows Kerberos this month are elevation of privilege CVEs, both with a CVSS of 8.1, as shown in Figure 4. In the context of Active Directory (AD), Kerberos is intended to be a more secure method of authentication when compared to NTLM. Instead of using passwords as NTLM does, Kerberos uses tickets to authenticate to services. Kerberos tickets contain a user’s logon information in an encrypted form.

Let’s explore this month’s critical vulnerabilities. CVE-2022-34718, a Windows TCP/IP remote code execution vulnerability, could allow a remote, unauthenticated attacker to execute code with elevated privileges on affected systems without user interaction. This officially puts it into the “wormable” category and earns it a CVSS rating of 9.8 and a rank of Critical. However, only systems with IPv6 enabled and IPSec configured are considered vulnerable.

Two other Critical bugs for Windows Internet Key Exchange (IKE) Protocol Extensions could also be classified as “wormable,” but only systems running IPSec are affected. The remaining two vulnerabilities in this month’s list affect the on-premises version of Microsoft Dynamics 365 — they could allow an authenticated user to perform SQL injection attacks and execute commands as db_owner within their Dynamics 356 database. CrowdStrike recommends prioritizing these vulnerabilities within your patching strategy if your organization uses these products.

Consider How Your Patching Strategy Affects Your Organization