CrowdStrike reveals which academic departments in the U.S. and UK are leading the way

As a leader in cybersecurity, at CrowdStrike we believe our tech is only as strong as the people behind it. As a remote-first company, we’re able to hire the best engineers from around the world to work on our cutting-edge technology and data at scale.

However, we’re well aware of the gender imbalance in the computer sciences and how this skills gap is affecting the tech industry and workforce. If we want to continue driving our industry forward, we must address these imbalances.

Our company is constantly looking for ways to improve the gender balance not only in our organization but in the tech industry as well. This is one of the reasons we recently partnered with Black Girls Code, have established a CrowdStrike scholarship with the Thurgood Marshall College Fund, recruit out of HBCUs and partner with organizations aimed at bringing more balance to tech, like the Smallpeice Trust in the UK.

When students are younger there is a more equal gender balance in those that show an interest in STEM. But unfortunately, research shows that girls start to opt out of STEM curriculum as they get older. We can’t rely on interest and passion alone to keep girls and women engaged. They need the support and enthusiasm of others around them as well.

Recent research has shown that women are 52% more likely to stay in STEM fields if they have a female role model. Without role models that look like them, it is often hard for women to see themselves in this field. After all, many times if you can’t see it, you can’t be it. The fewer female computer science academics there are, the less likely female students are to continue to study computer sciences, graduate with a computer sciences degree and go on to inspire other females to do so.

So, to find out where the best progress is being made and celebrate those university computer science departments with gender equality among their teaching staff, we’ve analyzed faculty pages of the top computer science universities in the U.S. and the UK. 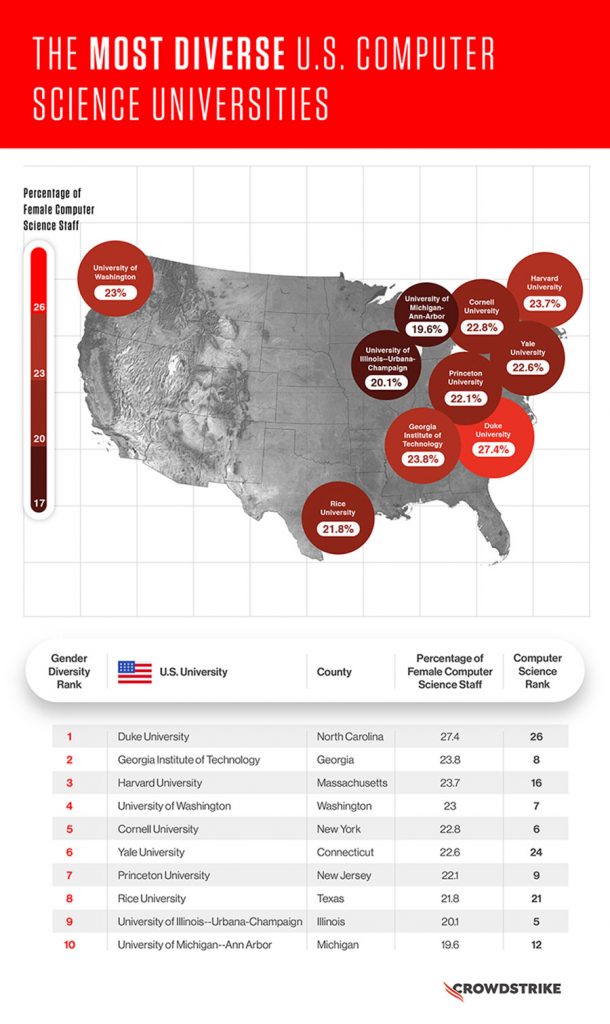 The Georgia Institute of Technology, the 8th top computer science school in the U.S., is next with 23.8% of its department staff female, closely followed by Harvard University with 23.7% female representation – ranked 16th in the U.S.

Perhaps what is most encouraging from our research is that 50% of the most gender diverse computer science departments are also in the top 10 highest ranking in the U.S. for student success. While we all know that there’s room for improvement, it’s great to see there are female role models across so many leading computer science programs in the U.S.

CrowdStrike has also analyzed 25 of the top computer science departments at UK universities to find out which has the highest female representation among teaching and research staff: 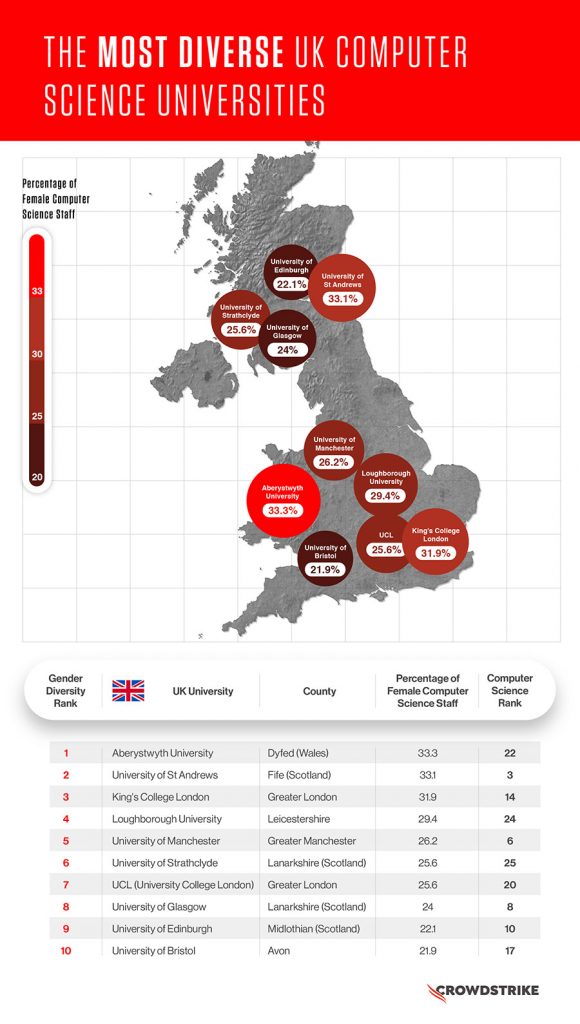 Aberystwyth University in Wales has the highest percentage of female staff members out of the UK universities analyzed with 33.3%. Its computer science department is ranked as the 22nd best in the UK for student performance out of 110 schools.

Two other universities also have over 30% female representation: University of St. Andrews in Scotland (33.1%), the UK’s third most highly rated computer science department, and King’s College London (31.9%) – ranked 14th. From looking at the map, we can also see a cluster of universities located in Scotland – 40% of the top ten most gender diverse computer science schools are located here.

If we compare the averages across the UK and U.S. it seems the UK has slightly better gender representation than the U.S., but the difference is marginal.

From analyzing the current state of gender diversity in the top computer science departments in the U.S. and UK, it’s clear there are many universities that have above average gender diversity, which ultimately contributes to better rankings among top programs.

However, it’s also clear that there is more work to be done. Women represent between 50-51 percent of the population in the U.S. and UK, so we need to continue to push to grow the numbers of women in the computer sciences field to close the gender skills gap.

At CrowdStrike, we’re committed to doing our part by working to close the gender skills gap. Whether through partnerships and donations to organizations committed to bringing greater access and opportunity to primary and secondary school students, scholarship programs for underrepresented candidates or an increased focus on gender balance and diversity in our recruitment and retention practices, we – and all tech companies – have a part to play.

Are you interested in a career at CrowdStrike? Visit the CrowdStrike Careers page to browse open positions and share your resume today.

To learn more about CrowdStrike’s commitment to Diversity Equity and Inclusion – visit our careers page.

To find the best universities for computer science, we used the following sources:

Only the top 25 universities in each country were analyzed. However, the U.S. faculty page for The University of South Carolina is currently not publicly available. This meant we included the 26th highest ranking university – Duke University.

All sources included the official university faculty pages both in the UK and the U.S. Only data on teachers, professors and researchers was collected, not support staff.

Gender data was manually checked for according to each university profile. In the rare instance a faculty profile did not include gender, they were excluded from our analysis.

If you are interested in a career in computer science or cybersecurity, read through our articles on cybersecurity 101 to get a feel for the subject.