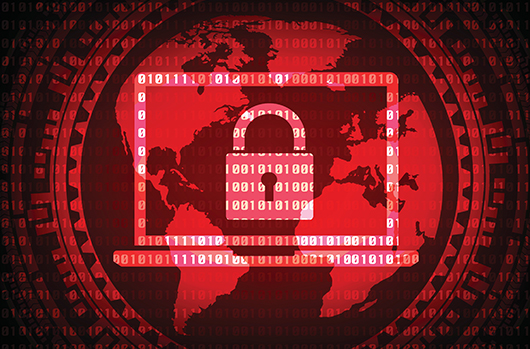 This analysis provides an in-depth view of the Samsam ransomware, which is developed and operated by the actor tracked by CrowdStrike® Falcon Intelligence™ as BOSS SPIDER. The infection chain and the execution flow vary according to the variant of the malware, both of which are detailed in this writeup. The malware uses external tools such as batch scripts, Mimikatz, and Sysinternals utilities, including PsExec and Sdelete, to aid in the propagation and cleanup of the ransomware. In some cases, the ransomware is delivered in an encrypted manner alongside a runner file, which is used to load and execute the malware in memory. In addition, the malware has anti-forensics capabilities that make it challenging to recover the ransomware payload from an infected system. Despite the steps taken by the malware to evade detection, Falcon Prevent can detect and prevent the family before it ever encrypts any files on the system.

Numerous variations of delivery methods for this ransomware family have been seen in the wild. Earlier variations of the ransomware involved gathering credentials from Active Directory via a credential dumper such as Mimikatz, generating public RSA keys for each user on the list and deploying the payload along with the following files:

In other cases, standalone Samsam payloads that do not require any arguments or helper files have also been seen.

As mentioned, there are a variety of ways in which the payload can be delivered and loaded onto a system. Subsequent sections will describe the payload and some of the previously mentioned helper files in more detail.

This file is responsible for traversing the file system on a victim computer and targeting specific file extensions associated with data backup. The extensions are provided in Appendix A: Targeted Backup Extensions. This program’s goal is to ensure that once the files on the system have been encrypted, no backups can be used for file restoration. Please note that if any shared drives are connected, the helper file will also delete the corresponding files in those folders.

Once loaded by the batch script, this file recursively enumerates each directory in each drive connected to the victim machine. If a directory name contains the string “backup,” the program will enumerate all the files within that directory and perform the following actions:

For all the other directories, once a target file is found, the program ensures that it can delete the file by performing the following actions:

The following is a snippet of the output of the tasklist command:

Figure 1: Output of the tasklist command

The runner file is responsible for decrypting and loading the payload in memory. This file requires a password as an argument, which is used in the decryption process. Once loaded by the batch script, the runner looks for a file with the extension “.stubbin” within the current working directory. This file is the actual encrypted payload and once it is found, the runner reads the contents in memory and deletes the encrypted .stubbin file from the disk immediately. The fact that the payload is decrypted and loaded entirely in memory makes it hard to recover the decrypted ransomware payload forensically.

Once the content is read, the runner decrypts it using the Rijndael algorithm. The password and a salt are provided to the algorithm to generate the decryption key and an IV. The salt value is “Ivan Medvedev”, which has been seen in numerous binaries (benign and malicious) employing this algorithm. With these two inputs, the runner file generates a 32 byte key, and a 16 byte IV, which are then subsequently used to decrypt the payload. It is important to note that any additional arguments passed down from the batch file are then passed to the decrypted payload. The runner file is then responsible for invoking the entry point of the payload; thereby executing it in memory.

Numerous variants of the payload were analyzed, and one of the main differences among them was whether the RSA public key was embedded in the payload or not. As mentioned earlier, the batch script responsible for loading the payload passes the public key as an argument to it, which is then read to a variable and used later in the execution process. This section will explain in detail the steps taken by the ransomware to encrypt the files on the victim machine.

Once the files have been written to disk, the payload initiates a new thread to execute selfdel.exe, which is explained in further detail in the Cleanup section. Next, the payload will recursively enumerate all the directories in each drive connected to the victim machine.

The payload ensures that the following directories are skipped when enumerating files:

This is to ensure a smooth execution flow. Since system files reside in C:\Windows, and files necessary for the .NET framework are in Reference Assemblies\Microsoft, it is imperative that those files are left intact. One possible reason for skipping files within the Recycle.bin directory might be that this directory is usually among the first ones to be enumerated by ransomware families. A few security solutions depend on that behavior to detect and prevent the ransomware process early on in the execution flow. By skipping that directory, Samsam can sidestep that mitigation and continue to encrypt the files.

In other variants of Samsam, this behavior of categorizing files per size is absent. Those variants utilize just one list to compile a list of all files within all the drives connected to the victim machine. Next, the file encryption subroutine is invoked to encrypt the target files.

For each file, the payload performs the following checks:

If any of the above checks fail, the payload moves on to the next file.

Next, there are two observed variations in the manner in which encryption takes place; these depend on the variant of Samsam running on the system.

For each file, the subroutine first checks if a file with the name <target filename>.<encrypted extension> already exists in the current directory. The encrypted extensions value has consistently been “.encryptedRSA”. If so, the following steps are taken:

If the subroutine finds a file with the name <target filename>.encryptedRSA, it immediately skips the target file. There are no checks on the length of this file, nor is there any attempt to delete the target file. It is important to note that the subroutine moves onto the next file, leaving the current target file intact. This is a significant oversight on the malware author’s part since it implies that if there are files of any length with the extension .encryptedRSA for each file on the system, no files would get encrypted. In fact the ransomware would simply skip over every file, assuming that the files are already encrypted. This was tested and confirmed during analysis.

Samsam utilizes the AES standard to encrypt the files. For each file, it generates a random 64 byte signaturekey, a 16 byte key, and a 16 byte IV. It also creates an empty file <target filename>.encryptedRSA to which it writes 3072 NULL bytes. This acts as a placeholder for the encrypted file header that is generated later in the execution flow. The payload then determines if there are current processes or services with an open handle to the target file by utilizing Restart Manager APIs. The following explains the steps in detail:

Once the target file handle is freed from any processes, the encryption subroutine reads its contents in a memory buffer in chunks of 10KB (10240 bytes) at a time. Next, the subroutine uses AES in CBC mode to encrypt the contents in the buffer, which are then written to the .encryptedRSA file starting from the 3073rd byte position (after the header placeholder). Once the entire file content has been encrypted and written to the new file, the file header is generated.

The randomly generated signaturekey is used to generate a Hash-based Message Authentication Code (HMAC) hash of the encrypted content. This value, inArray, is then encoded with base64, and written to the file header. The following is the structure of the file header:

The corresponding RSA private key would help decrypt each value in the file header that would, in turn, decrypt the file contents. The following is an example of an actual file header of a file encrypted by Samsam: 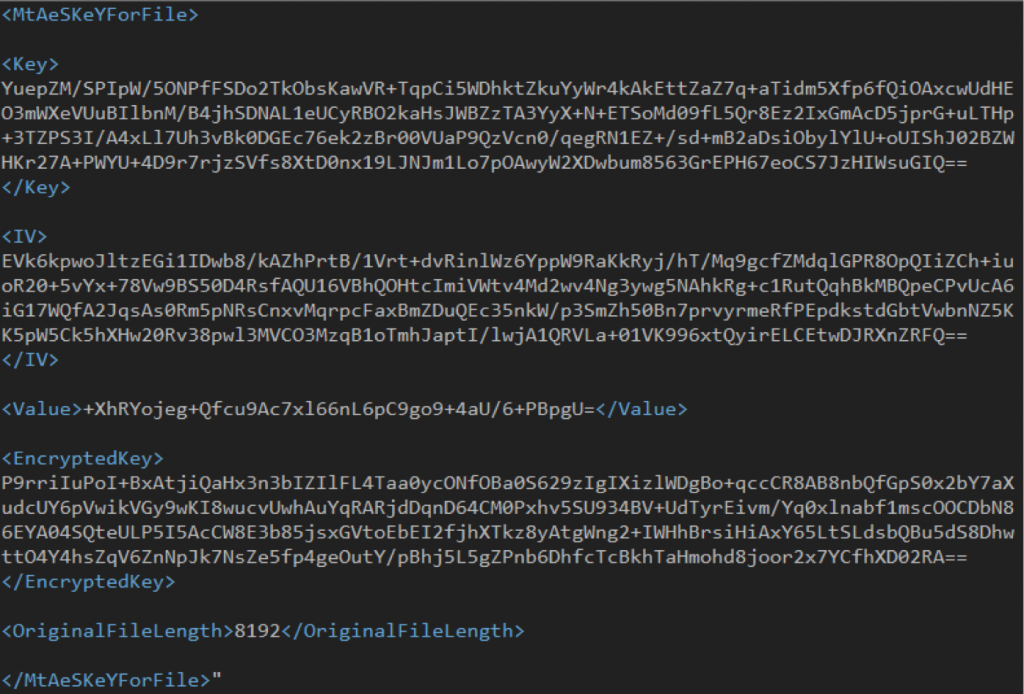 Figure 2: File header of a file encrypted with Samsam

Once the file is encrypted, the original target file is deleted from disk.

After each file has been encrypted, the payload will drop a text file named HELP_DECRYPT_YOUR_FILES in the current directory. Figure 3 shows contents of the file. 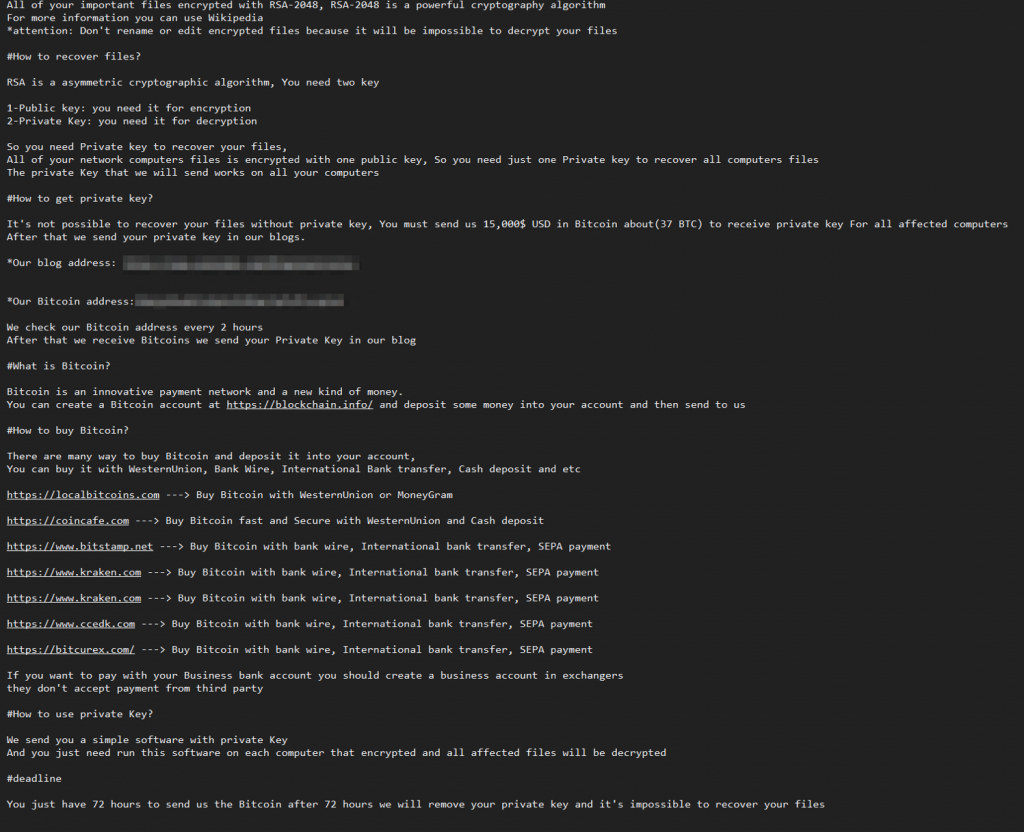 In some instances, HELP_DECRYPT_YOUR_FILES.html with the same contents is dropped in the current directory. An odd behavior of every variant of Samsam analyzed is that the ransomware note is dropped for every file encrypted. Therefore, in directories where multiple files have been encrypted, multiple copies of the same ransomware note are dropped.

As mentioned earlier, the payload parses its resource section to extract two executables which are then written to the current directory. The following are the properties of both files:

The file del.exe is a legitimate Sysinternals utility that is used to delete files from disk. The file selfdel.exe is invoked in a new thread by the payload. It first ensures that a process named samsa.exe is currently executing. If not, it immediately exits. Next, the file waits for 3 seconds, and then issues the following command: del.exe -p 16 samsam.exe. This invokes the legitimate utility del.exe, which is used to delete samsam.exe from disk. However, deleting a file simply marks it as deleted in the MFT table, which frees up the clusters that were allocated to the file. The file contents would still be present in those clusters. To overcome this, the utility actually overwrites the clusters; the -p 16 argument ensures that the clusters are overwritten 16 times, making forensic recovery of the payload impossible. This technique only applies to standalone payloads, and not to the variants that involve a runner file to decrypt and execute the payload in memory.

Once the payload is deleted, selfdel.exe sleeps for 30 seconds, and then deletes del.exe from disk; however, it does not delete itself.

Samsam is unique in terms of how it is delivered onto a system. The gathering of user credentials to generate unique RSA public keys ensures that an organization would have to pay for each infected user to decrypt the files. In addition, the use of cleanup files for standalone executables, and the fact that other variants run entirely in memory, makes it extremely difficult to forensically collect the payload from disk or memory. Despite these challenges, Falcon Prevent™ next-gen AV is able to detect and prevent the malware before it can perform any file encryption as seen below:

Falcon Prevent is also able to detect and prevent the dropped file selfdel.exe from executing once loaded by the payload as shown below:

These preventions are based on the behavioral patterns displayed by Samsam in conjunction with CrowdStrike’s machine learning algorithm.

Download the white paper: Guide to AV Replacement: What You Need to Know Before Replacing Your Antivirus Solution.