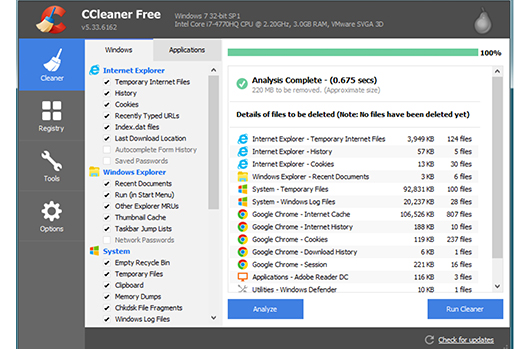 Recently, CrowdStrike® analyzed the backdoor embedded in the legitimate PC cleaning utility CCleaner version 5.33, as reported in the blog post Protecting the Software Supply Chain: Deep Insights into the CCleaner Backdoor. This was an example of using an organization’s supply chain infrastructure as an infection vector, a trend that has been on the rise in 2017 as discussed in another recent post, Software Supply Chain Attacks on the Rise, Undermining Customer Trust. In addition, CrowdStrike Falcon® Intelligence™ reported on the backdoor previously and discussed the possibility of the infrastructure being tied to a Chinese nexus.

Additionally, CrowdStrike Falcon Intelligence also discussed the technical details of the Stage 1 and Stage 2 backdoors with analysis showing that the original backdoor was the first stage in a multi-stage infection chain, meant to download a dropper (Stage 2) that was only deployed to specific targets. Stage 2 drops either a 32-bit or 64-bit binary, depending on the system architecture and is responsible for decrypting the actual payload embedded in a registry key. This payload attains the C2 address via a variety of steps, and downloads an unknown binary which is Stage 3.

This post provides an in-depth analysis of the Stage 2 dropper; the subsequent payload and the steps that are taken to calculate the C2 IP address in order to download the next stage binary.

The following information describes the Stage 2 dropper that pertains to the CCleaner embedded malware:

Once executed, the dropper calls IsWow64Process to determine if it’s being run in a 64-bit environment. Depending on the result, it will drop a 32-bit or 64-bit binary on the system. The binary is embedded within the malware itself, and it is zlib compressed. The dropper will zlib inflate itself and drop onto the victim computer. The dropper also performs system checks by accessing the USER_SHARED_DATA of its own process and querying the NtMajorVersion value to determine if the system is running Windows XP. The output determines the location of the dropped binary.

It is important to note that both TSMSiSrv.dll and localspl.dll are actually the names of legitimate Microsoft Windows libraries. TSMSiSrv.dll’s official description is “Windows Installer Coordinator for Remote Desktop Session Host Server” and it is loaded by the service “SessionEnv” that is the Remote Desktop Configuration service. According to MSDN, localspl.dll is a “Local Print Provider” and handles all print jobs directed to printers that are managed from the local server. This file is loaded by the service “Spooler” that is used for printing services.

After dropping the file, the dropper modifies its date/time stamp so that it matches that of C:\Windows\System32\msvcrt.dll.

Next, the dropper adds the following registry keys. (Note: This is specific to a 32-bit environment. Certain value such as file size will change if the malware is running in a 64-bit environment.)

The dropper leverages an existing Microsoft Windows service to load the malware. Once the registries have been added, the dropper calls a function to modify and restart an existing service. If executing in Windows 7 or higher, it calls OpenServiceA on the existing service, “SessionEnv” — a service for Remote Desktop Configuration — and changes its configuration by calling ChangeServiceConfigA with the following parameters:

This ensures that the service will auto-start upon system reboot (i.e., a persistence mechanism). The dropper then restarts the service, which invokes the legitimate windows library “SessEnv.dll” located in C:\Windows\system32. It is important to note that SessEnv.dll is loaded in the process svchost.exe. Analysis shows that it attempts to load the legitimate library %SystemRoot%\system32\TSMSISrv.dll by calling LoadLibrary on it to call the functions StartComponent, StopComponent, OnSessionChange, and Refresh as shown in the image below: 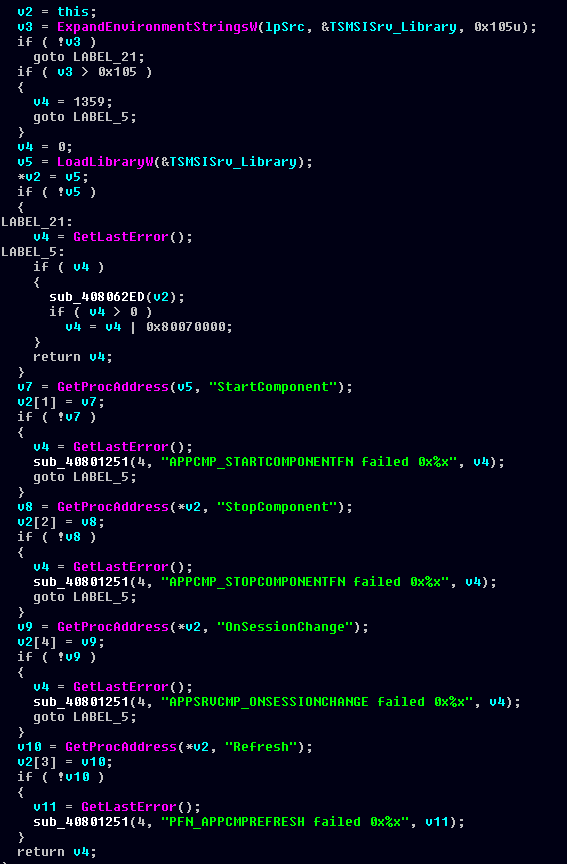 However, at this point in the execution, TSMSiSrv.dll is the name of the malicious binary created by the dropper; therefore, restarting the SessionEnv service loads the malware instead. Similarly, if the Windows version is XP, the malware takes the same steps on the service “Spooler.” Upon restart, the service invokes C:\Windows\system32\spoolsv.exe, which then attempts to load the Windows library localspl.dll that is now the actual malware.

As mentioned earlier, Stage 2 drops either a 32-bit or 64-bit binary on the victim system. Similar to the Stage 1 dropper, which was a modified version of the legitimate utility CCleaner, the 32-bit and 64-bit binaries are modified versions of VirtCDRDrv.dll (a module developed by Corel, Inc.) and EFACLi64.dll (a module developed by Symantec), respectively. However, it should be noted that unlike the trojanized version of CCleaner, these files are NOT signed.

Analysis shows that the __security_init_cookie function of the file has been modified. Normally this function is used as mitigation against buffer overflows; however, in this case, a few extra instructions have been added to the end of the function to initialize a global variable. The image below displays the difference between the clean VirtCDRDrv.dll (labeled primary on the left), and the trojanized one on the right. 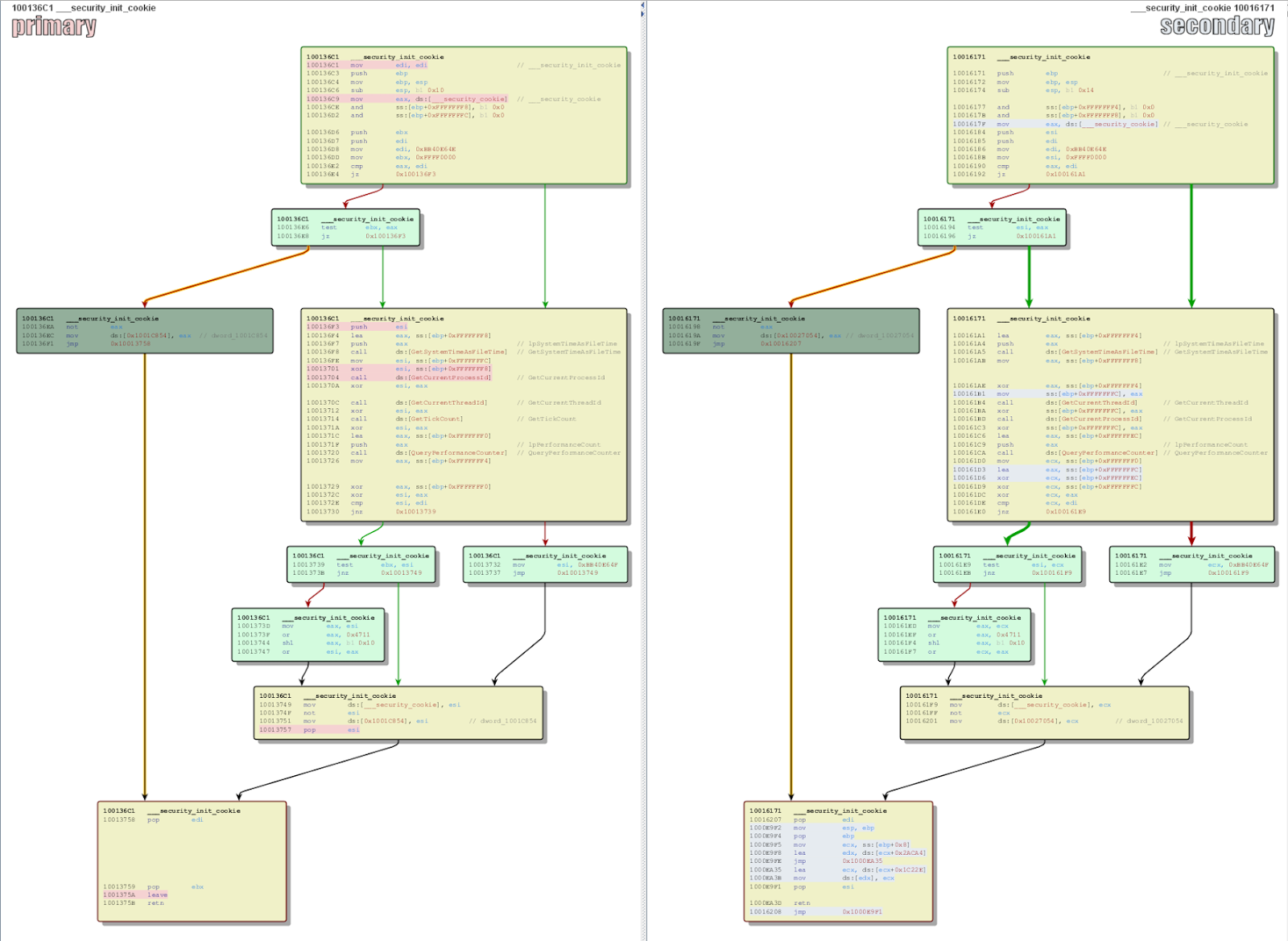 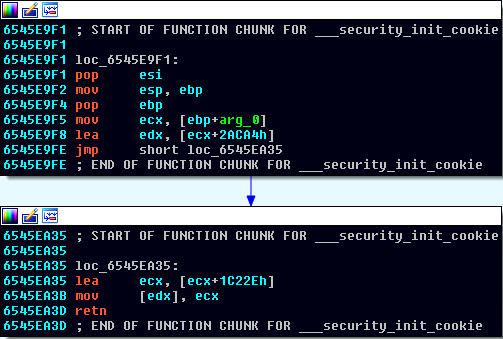 Once the __security_init_cookie function is done, the __DLLMainCRTStartup function is called, which then makes the call to the function located at the memory address that was inserted into the global variable. This function is responsible for the core functionality of the dropped file. It should be noted that the malicious function is called prior to the entry point of the binary being reached.

The 32-bit binary and the 64-bit dropped file have been modified in the same manner. As seen in the image below, the only difference in the __security_init_cookie function between the legitimate utility (on the left) and the trojanized version is a jmp instruction at the end of the function.

Once loaded by the service, the binary reads the registries created earlier by the dropper. It allocates a block of memory and reads the data blob from HKLM\SOFTWARE\Microsoft\Windows NT\CurrentVersion\WbemPerf\002. In addition, it also reads the first 2 DWORDS from HKLM\SOFTWARE\Microsoft\Windows NT\CurrentVersion\WbemPerf\002, XORs them with the value 0x0xF3289317 and prepends them to the data blob. Together, this structure forms a shellcode appended by obfuscated data.

The shellcode utilizes the following scheme, reproduced in Python, to deobfuscate the embedded data:

It should be noted that the above is a modified version of the Windows function rand(). The decoded data is a set of instructions to unpack yet another shellcode and a DLL in memory. The resultant DLL is the main payload of Stage 2 and, similar to Stage 1, is missing the IMAGE_DOS_HEADER as a possible means to circumvent AV solutions that search for the MZ header in memory. The shellcode that is decoded alongside the DLL is responsible for resolving the needed APIs and calling the OEP (Original Entry Point) of the DLL in memory.

Upon being loaded in memory, the payload creates a thread that performs the core functionality of Stage 2. It creates an event named Global\KsecDDE and only commences execution if the event creation is successful. Analysis shows that there are multiple encoded URLs embedded within the payload, and they are deobfuscated using the scheme reproduced in Python below:

Following are the decoded URLs:

Before connecting to any of the above, the payload first attempts to connect to https://www.microsoft.com. If that fails, the payload then attempts to connect to http://update.microsoft.com. This is to perform a connectivity test to ensure that the victim computer is connected to the internet. The payload also ensures that the received data contains the string “Microsoft” or “Internet Explorer”; apart from a connectivity test, this could also be seen as an anti-sandbox technique. If the test passes, a global variable Connectivity_Flag is set to 1, after which the malware attempts to connect to either the WordPress or the Github URL. At the time of analysis, the Github URL was not available.

The following is the data returned by the WordPress URL: 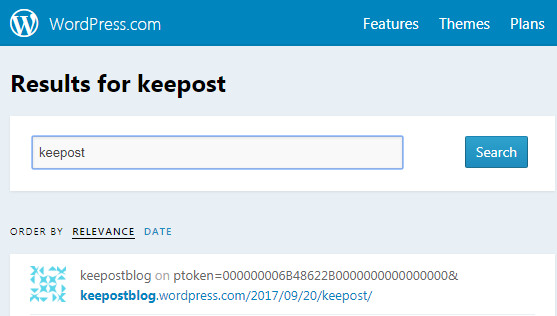 If the payload fails to connect to both the Github and WordPress URLs, it will attempt to connect to get.adoble[.]com to calculate an IP address. It gets the hostent structure by calling gethostbyname on the domain, which then gives it a NULL terminated list of IP addresses associated with the domain. The first 2 IP addresses will then be used to calculate the IP address using the algorithm reproduced in Python below:

Next, the malware calculates a checksum of the victim computer name using the following algorithm:

This checksum value is then added to the volume serial number of the victim computer. The LOWORD of the resultant DWORD is then added to the value 0x2DC6C0 to get a unique value. Next, the malware creates a socket and sets up the following packet to send to the newly calculated IP via a DNS query:

Following is the actual UDP stream seen during analysis:

At the time of analysis, the IP address was not available; however, analysis shows that the malware performs the following checks on the received response from the IP to ensure its authenticity.

The malware takes values from the response stream at various positions, and calculates the Stage 3 C2 in the following manner:

Once the 3rd stage C2 has been calculated, the malware calls out to it expecting to receive an obfuscated blob. The first DWORD of the blob is the CRC32 hash of the decoded blob. The blob is decoded using the same scheme that is used to decode the URLs, and the CRC32 hash of the decoded data is compared with the first DWORD of the received data to ensure its integrity. Analysis shows that the data is supposed to be yet another DLL, which is then loaded in memory and executed.

CrowdStrike will notify you of any additional activity through the Falcon Intelligence™ detections. CrowdStrike recommends blocking the IP and URLs mentioned in this blog post and the previous one to prevent any communication to the server. In addition, CrowdStrike recommends only using the latest version of the Avast CCleaner software to ensure that the infection does not occur.