GitOps and Shift Left Security: The Changing Landscape of DevSecOps

Application developers have always had a tricky balance to maintain between speed and security, two requirements that may often feel at odds with each other. Practices that increase speed also pressure development teams to ensure that vulnerable code is identified and remediated without slowing development. As companies embrace digital transformation initiatives, the need to weave better security into developers’ workflows has only grown clearer.

And the Survey Says …

But just where are enterprises on this journey? In a new report, “Walking the Line: GitOps and Shift Left Security,” analyst firm Enterprise Strategy Group (ESG) found that the majority of app developers and IT and cybersecurity decision-makers recognize the need to bake security into the development process and their organizations are ready to spend money to do so. Yet technical and other challenges remain.

Key findings of the report include:

The Cybersecurity Threat Landscape Is Intensifying

The emphasis on integrating security into the development process could not have come at a more crucial time. Only 3% of respondents said they had not experienced one of the security incidents related to internally developed cloud-native applications and listed in the chart below in the past 12 months. At the same time, 38% said they had suffered an attack that resulted in data loss due to the insecure use of APIs. 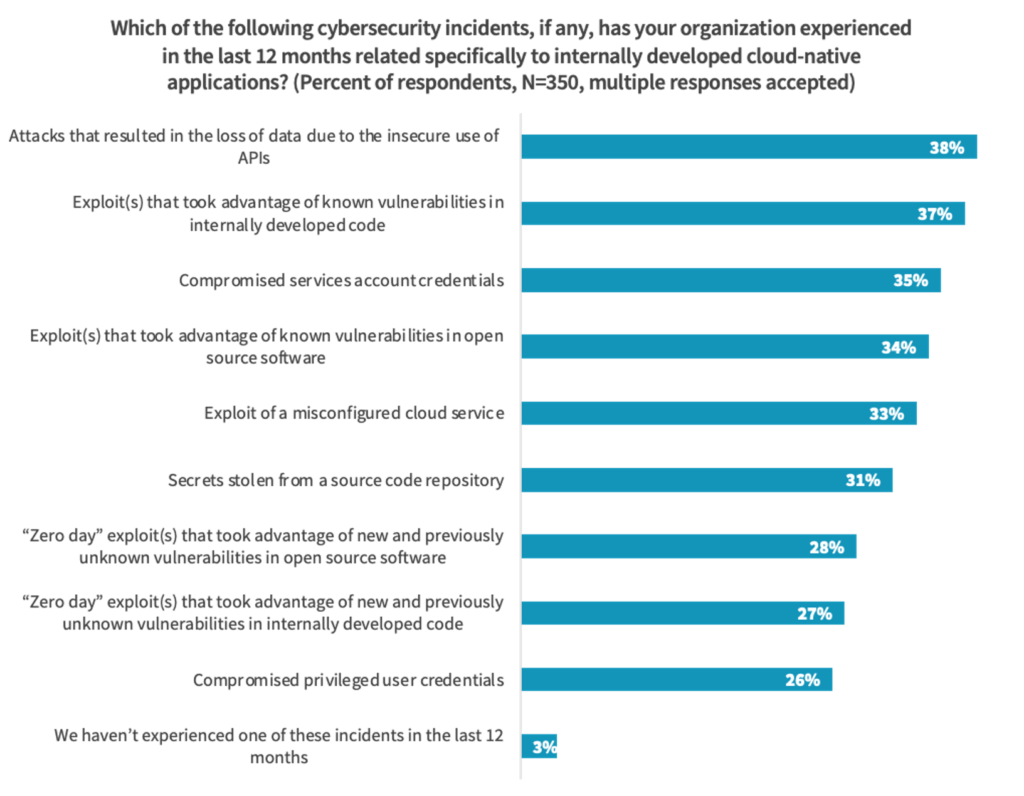 When asked what elements of the cloud-native application stack they feel are most susceptible to compromise and therefore represent the greatest risk, respondents most often selected APIs followed by data storage repositories and internally developed application source code.

The good news is that awareness of these challenges appears to be driving organizations to shift security left. During the next 12 to 18 months, 34% said improving application testing will be a top investment priority for their cloud-native application security plans. Thirty-one percent named applying runtime API security controls a top priority, and 31% said the same about detecting secrets that have been committed and stored in source code repositories.

The Impact of Shift Left Security

Some of those surveyed felt that developers are not always comfortable handling security due to friction: 46% said developers view security tasks as disruptive to development processes, and 44% said developers felt the security team should be doing the security work. This shows that in addition to facing some integration and technical challenges, organizations will have to overcome such workplace cultural issues if they are going to succeed in shifting left.

Security is not meant to be a red light on the road to your business goals. It is meant to enable you to reach those goals safely and with minimal risk, and increasingly, organizations understand they need to integrate security into their development processes to do that. Organizations looking to walk the line should use solutions like, CrowdStrike Cloud Security, to integrate security early into the continuous integration/continuous delivery (CI/CD) pipeline in a way that is automated, frictionless, and empowers developers to deliver applications without decreasing speed.

To learn more about the challenges organizations face with faster cloud-native development lifecycles and how developers and security teams work together, download the report here.