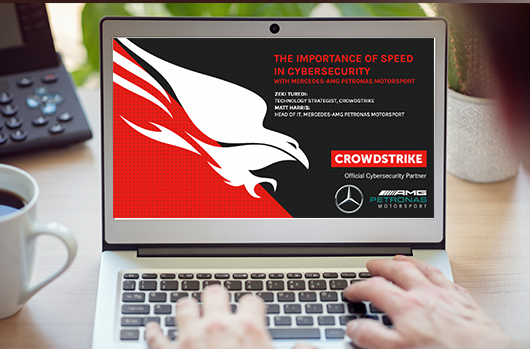 The webcast opens with Harris explaining the global nature of his role: “I have overall responsibility for IT as a function — that’s everything to do with finance, resources, partners, and technologies to a degree, but that’s mostly handled by members of my team. The team is part of a global sport. We go to 21 countries at the moment, next year I believe (it) will be 22.”

He goes on to explain the challenges of having to secure data, systems and personnel across the globe: “That leads us into many partners and technologies that we work with, CrowdStrike being one of them, to help us make sure we’re aware of anything that could be a threat to us, both people and technologies, when we’re traveling around the world,” he says.

Harris also discusses how CrowdStrike functions as an extension of his IT team and why speed plays such a critical role, “I can’t afford to have a mini army of security people looking after our systems, but we have to be secure — everything’s about speed. We say our currency is time, money does matter and it is important to us, but time is our currency.”

Data Security Is Crucial to Formula One Racing

Historically, there have been regulations around accessing data from competing teams, Harris says, however, now data protection has taken on a more global perspective. “If other people would like to try and get to, for instance, the engine division’s IP, maybe around the cars, maybe the engine itself — that type of information is very, very important to other manufacturers —  not necessarily in F1 but in other countries, other companies. We have to make sure that we’re protected in the best way possible,” he says.

He goes on to explain how the CrowdStrike Falcon CompleteTM solution enriches his security capabilities by providing global threat protection virtually without overhead, in terms of either infrastructure or time. Falcon Complete is CrowdStrike’s turnkey solution that includes Falcon PreventTM next-generation AV,  Falcon InsightTM endpoint detection and response (EDR), Falcon OverWatchTM managed threat hunting, Falcon DiscoverTM IT hygiene, and the Falcon Complete managed detection and response (MDR) team. Harris explains, “CrowdStrike gives us that extension of the IT team without the overhead, without that time. And they’re learning from a huge customer base … and everything that’s happening around the world rather than just maybe what we’re seeing and we’re understanding. We have the benefit of actually learning from what other people are seeing … so we’re protected way before it’s actually a problem for us.”

Massive Amounts of Data to Protect

Harris offers details on the massive amount of data his team must protect, the type of data they deal with, and why speed is so critical. “We have around 18,000 channels of information coming off the car in real time — that’s from about 300 sensors individually. Those sensors give us a piece of information that on its own is very useful.”  However, he points out that correlating the data is also crucial, “Sometimes we have to combine multiple channels of information to get something sensible. As an example, to know whether you’ve actually got a (tire) puncture isn’t as simple as the tire pressure going down, because that could be a change of track temperature or change of weather — the car could be going slower — there are many different variables to tell whether you actually do have a puncture,” he explains.

He also discusses how the data his team deals with is not confined exclusively to while racing events are happening. “If you think about pre- and post-event as well, we create many, many more times the amount of data. A single simulation, for example, can create around 45TB per week,” Harris says.

He also emphasizes the importance of speed in harnessing the data, and protecting it against threats. “The faster we have that data, the faster we can make informed decisions. The business is all about data-driven decisions, whether that’s at the track or in the factory,” Harris explains.

In the second half of the webcast, Turedi discusses how Falcon Complete helps protect Mercedes-AMG Petronas Motorsport by applying the critical components of speed to ensure comprehensive protection.

Some highlights from Turedi’s discussion include the following:

In closing, Harris describes how his team has been able to operationalize the information they get from CrowdStrike. He explains that it happens in a couple of different ways, “One of the most impressive ones is the reports we get pre-event. We obviously go to 21 to 22 different countries during the year and you’re never really quite sure what security measures you should or shouldn’t take with your personal devices or your work ones. So, getting a one- or two-page report that actually goes to all the traveling members of the team … all the senior management and also everybody in IT and a few of the hubs … gives us real information and insight into what we should be thinking about with regards to what devices we should not take with us, what devices should be turned off when we’re going through security, and other measures that we could take to make sure our data is secure.”  The second way they operationalize this information is via the Falcon Complete team. Harris says, “We rely very heavily on the team informing us of things that they’ve seen within the portal, and about things that are occurring on our network.”