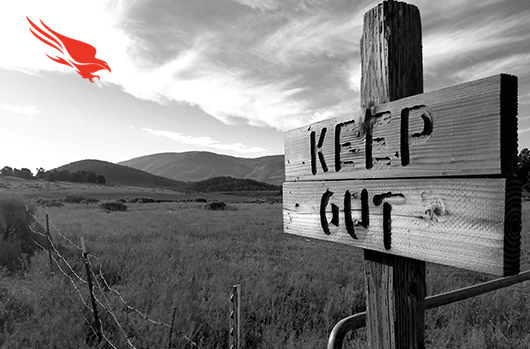 With offense-focused methodologies being created around “living off the land” and “bring your own land,” we would like to cover a somewhat overlooked concept: “staying off the land.” This simple concept revolves around the idea of limiting the use of tooling used for offensive purposes executed on a compromised host.

With endpoint detection and response (EDR) and other security products increasingly focused on looking for known malicious tooling and LOLbas, the simple approach of conducting activity off-host as much as possible can greatly reduce the attacker’s chance of being detected. This blog covers some common techniques and tooling that support this cyberattack methodology. The tactics, techniques and procedures (TTP) discussed focus primarily on an Active Directory (AD) environment.

In order to access a host remotely, an attacker needs to either introduce some form of malicious software or use the host’s existing software to initialize a command and control (C2) channel. Generally, this is in the form of a call-back mechanism such as a remote access trojan (RAT). Most RATs are malicious pieces of software delivered either as a standalone binary, shellcode or script, or a combination of these. The goal is to establish a channel between the attacker and victim for C2 communication.

Most mature RATs provide the functionality required to create a SOCKS proxy on the compromised host and give the attacker access to this proxy over the established C2 channel. SOCKS proxies allow most network traffic to be tunneled over the proxy — commonly used to encapsulate TCP packets — and transfer them from one network to another. Once a RAT is in place and a SOCKS proxy is created, the attacker can use it to turn the compromised host into a “dumb pipe” into the victim’s network. This access allows the attacker to conduct the majority of their malicious activity without bringing additional tooling into a host. Compromised hosts simply act as pipes into a victim network, granting the attacker access to all resources within the network.

Once an attacker has established a foothold, enumeration of the landscape begins. Common techniques for enumeration can be conducted from the attacker’s system instead of the compromised host. In order to direct the traffic within the victim’s network, tools such as ProxyChains can be used to force network traffic over a specific SOCKS proxy by linking an application via LD_PRELOAD.

While this technique allows you to keep the majority of tooling off of a compromised host, there are still plenty of indicators for a security team to alert and hunt on. That’s why it is important for an attacker following this methodology to be aware of overall operational security and potential indicators being created even from a network standpoint. For example, we have observed multiple security teams monitoring for protocols that include source host names of “kali” (a common Linux distribution used by attackers and “red team” security professionals) to easily detect an attack and score a quick win.

BloodHound is a common tool of choice for AD enumeration. There is a Python version of the BloodHound collector that can be run with ProxyChains to collect most of the standard BloodHound data set including AD objects (users, groups, computers, etc.), local administrators, user sessions and more. Other common methods of enumeration that can be conducted from an attacker’s machine include SPN scanning to identify services without port scanning, file share enumeration to identify readable and/or writable file shares, and web service fingerprinting, to name a few.

As you might notice, a large amount of the tooling mentioned comes from Impacket. Impacket is a comprehensive library with a large number of example tools that provide extensive offensive capability for all phases of attack.

After gaining enough privileges, attackers will often establish additional C2 channels on new hosts as backup, or move laterally to enumerate another host in the hope of collecting credentials or sensitive information required to achieve the overall objective. Most Windows hosts can be remotely accessed over SMB and RPC (including WMI), and less desirable protocols such as RDP (which may result in potential user interruption and forensic artifact creation).

SMB’s file transfer protocol can be used to upload malicious files to a host or obtain sensitive data from a host. Tools such as Samba’s smbclient and Impacket’s smbclient allow attackers to pivot through one compromised host and upload or download files onto another host using valid credentials. RPC over the SMB protocol can be used to create scheduled tasks, resulting in command or code execution using tools like Impacket’s services. DCOM/WMI over RPC can also be used for command execution with tools including dcomexec and wmiexec.

It should be noted that some of these tools have options or features that will create files on the remote host — however, this is counter-productive to staying off of the land. An example of this is wmiexec. WMI can be used to run commands on a remote host by calling the Win32_Process class. This class does not return the output of a command over WMI. Wmiexec allows you to view the output of a command by redirecting standard output to a file on disk and then pulling down that file over SMB to read the command output. This can be avoided by instructing wmiexec to be non-interactive. It is always important to have a full understanding of what a tool is doing “under the hood,” and full code reviews should be conducted on all tooling prior to use. 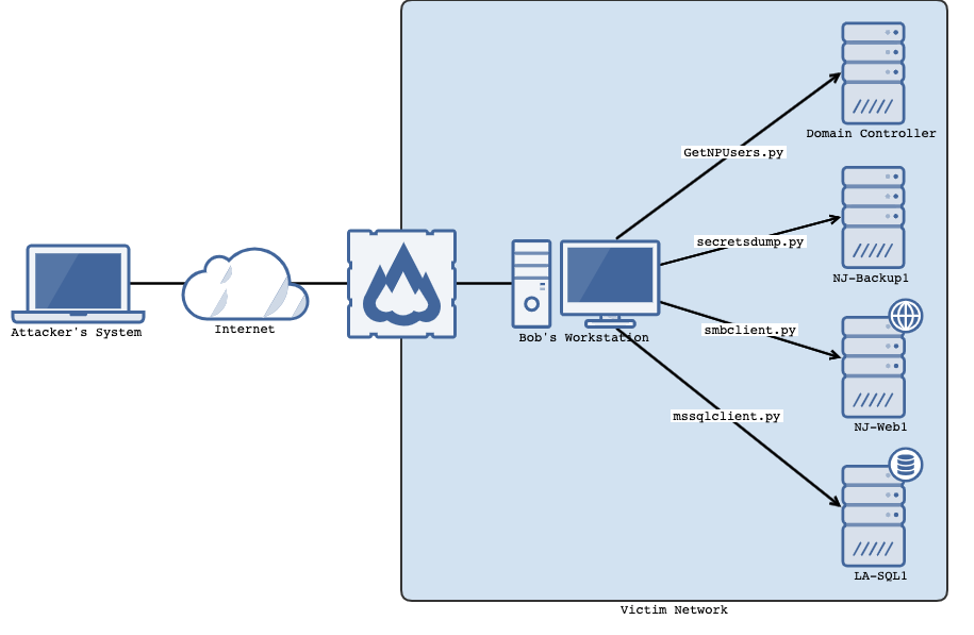 As shown in the attack scenario above, an attacker can gain access to a single workstation in a victim network and with that access carry out a full attack, obtaining valuable assets. The attack path does not require an attacker to introduce malicious tooling or misuse existing binaries on a compromised host to reach their objective. This is not to say that this type of path could not be detected — in fact, many facets of this attack can be identified when looking for the proper indicators.

The benefit of the “stay off the land” methodology is its reduction in potential indicators or alerts by avoiding conducting malicious activities on compromised hosts. This methodology may not be the best fit for every scenario, but it is an additional strategy in an attacker’s arsenal.