What is Observability? Key Components & Platforms

While it may seem to be a new buzzword invented by the tech world, the concept of observability was actually introduced in engineering control theory almost a century ago. In simple words, observability is when you infer the internal state of a system only by observing its external outputs.

When translating this concept to software development and modern IT infrastructure, a highly observable system exposes enough information for the operators to have a holistic picture of its health. When observability is implemented well, a system will not require operations teams to spend much effort on understanding its internal state.

Observability doesn’t center around technology. It’s a practice involving a set of processes and the associated tools to achieve the desired level of insight into the system. In this post, we’ll look at the key concepts involved in observability:

The Basics of Observability: Key Components

Metrics are counters or measurements of a system characteristic during a time period. Metrics are numeric by definition and represent aggregated data. Examples of metrics can be average CPU usage per minute per server or the number of requests returning errors per JVM each day. Metrics can be collected from infrastructure, applications, load balancers, and even applications.

Logs are intended to leave clues on what part of the codebase a request has reached, and if the application encountered anything unexpected or abnormal in processing that request. Logs can also be used to capture access attempts, as in the case of access logs. Logs can be generated by the application responding to requests or by the operating system (for example, syslog or the Windows Event Log).

Traces are similar to logs, but they provide operators with visibility into actual code steps.  For example, traces could shed light on which method or service a certain request traversed before finishing (or crashing). Due to their nature, traces tend to be sampled and not stored for all requests. The ability to capture traces depends on the capabilities of your chosen observability platform or library.

In addition to the three pillars, you can use events to increase the observability of a system. For example, you can decide that every time an admin user executes a privileged task, the system registers an event in an observability tool. Events are registered with specific actions (for example, the execution of a function, the updating of a database record, or an exception thrown by the code). Analyzed over time, events can help determine patterns. Alternatively, structured logs can also be used as low-level events.

The more critical a component is to your overall system, the more important it is to invest in its observability.

Why do we need observability?

Observability isn’t a goal in itself, but rather a practice to reach the availability and reliability requirements of the business. Its goal is to reduce the mean time to repair (MTTR) and increase the mean time between failures (MTBF). This can happen only if operators are able to troubleshoot production problems quickly, identify problems before they become incidents, and apply proactive measures.

From an engineering perspective, observability allows developers to catch bugs early in the development cycle, resulting in higher confidence in software releases. This encourages the drive for innovation while maintaining quality software and higher release velocity. Support teams are also empowered, particularly when using Real User Monitoring (RUM), which leads to better collaboration between teams and better support for customers.

Not only do customers receive better products, but they also have a more reliable service. This is because engineers and support teams can identify issues and apply proactive fixes. A high level of observability can also expose the “unknown unknowns”—issues that were previously not known to have existed.

One point of confusion often encountered is the difference between observability and monitoring.

Monitoring is the action of continuously checking the metrics and logs of a system to determine if the system is unhealthy or needs manual intervention. Monitoring also centers around measuring individual components in isolation (such as the server, network, or database).

Modern IT systems are complex. Most are distributed, potentially multi or hybrid cloud, and have requirements for high availability. They are also often the target of malicious attacks.

A distributed system as complex as this can generate an enormous amount of observable data. A good observability platform should be able to retrieve data from all these sources, store and sift through it in a timely fashion, and build meaningful pictures from that data. Additionally, it should be able to separate the signal—that is, events of interest—from the noise. A good observability platform should correlate and enrich data to find anomalies and trends for operators.

You can use the list below to assess the suitability of an observability platform. In short, the platform of choice should be able to:

Falcon LogScale is a modern log management solution that addresses the current needs of system observability with a cost-efficient, unlimited licensing plan. It provides real-time alerts that can increase your observability and ensure business continuity.

Log everything and anything you want with CrowdStrike’s Falcon LogScale

Arfan Sharif is a product marketing lead for the Observability portfolio at CrowdStrike. He has over 15 years experience driving Log Management, ITOps, Observability, Security and CX solutions for companies such as Splunk, Genesys and Quest Software. Arfan graduated in Computer Science at Bucks and Chilterns University and has a career spanning across Product Marketing and Sales Engineering.

What is Log Management? The Importance of logging and best practices 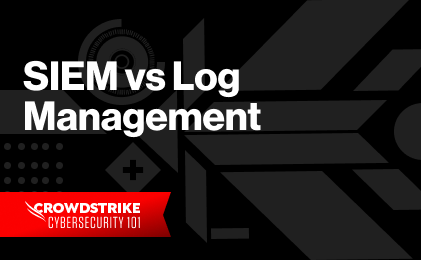