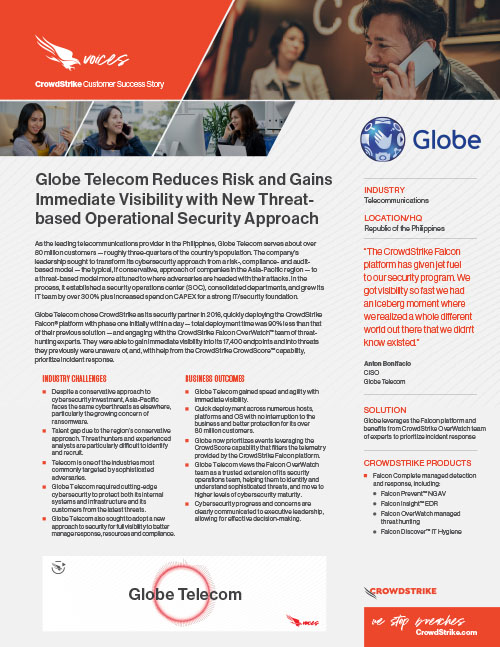 As the leading telecommunications provider in the Philippines, Globe Telecom serves about over 80 million customers — roughly three-quarters of the country’s population. The company’s leadership sought to transform its cybersecurity approach from a risk-, compliance- and audit- based model — the typical, if conservative, approach of companies in the Asia-Pacific region — to a threat-based model more attuned to where adversaries are headed with their attacks. In the process, it established a security operations center (SOC), consolidated departments, and grew its IT team by over 300% plus increased spend on CAPEX for a strong IT/security foundation.

Globe Telecom chose CrowdStrike as its security partner since 2016, quickly deploying the CrowdStrike Falcon® platform with phase one initially within a day — total deployment time was 90% less than that of their previous solution — and engaging with the CrowdStrike Falcon® OverWatch team of threat-hunting experts. They were able to gain immediate visibility into its 17,400 endpoints and into threats they previously were unaware of, and, with help from the CrowdStrike CrowdScore capability, prioritize incident response.

“The CrowdStrike Falcon® platform has given jet fuel to our security program. We got visibility so fast we had an iceberg moment where we realized a whole different world out there that we didn’t know existed.” Anton Bonifacio, CISO, Globe Telecom