In any software development cycle, it is best practice to catch issues as early as possible since it both improves security and decreases the workload for both developers and security. In order to do this, CrowdStrike offers solutions for developers at build time that allow them to assess their Docker container images and review summarized report data integrated with their favorite CI/CD tools like Jenkins. 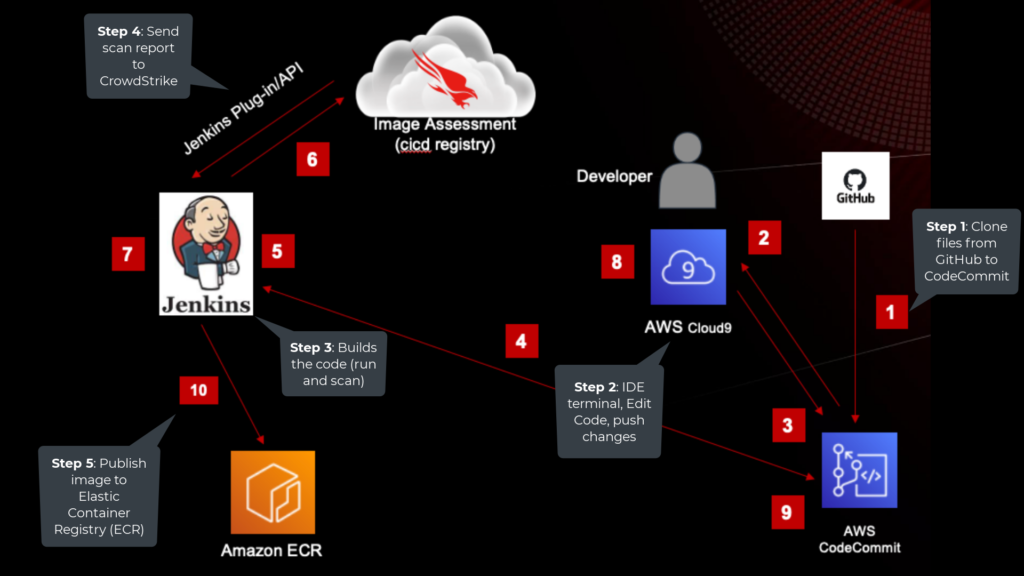 CrowdStrike Security for Jenkins is a plugin that uses image assessment to find vulnerabilities in container images early in the development process (i.e. shift-left), and then block them as per predefined policies within the CrowdStrike Falcon platform. The plugin provides several advantages:

Jenkins Pipeline (or simply “Pipeline” with a capital “P”) is a suite of plugins which supports implementing and integrating continuous delivery pipelines into Jenkins. A continuous delivery (CD) pipeline is an automated expression of your process for getting software from version control right through to your users and customers. Every change to your software (committed in source control) goes through a complex process on its way to being released. This process involves building the software in a reliable and repeatable manner, as well as progressing the built software (called a “build”) through multiple stages of testing and deployment.

Jenkinsfiles are written in groovy, and declare a list of Stages that the pipeline must complete to result in a successful build. Our plugin is called with the method crowdStrikeSecurity in its own stage. When it is called, it can accept a series of parameters including:

Here’s what calling our plugin looks like in code:

The Dockerfile pulls from an old version of Python from Dockerhub and copies main.py from the local directory. This version of the Python will contain critical and high vulnerabilities. 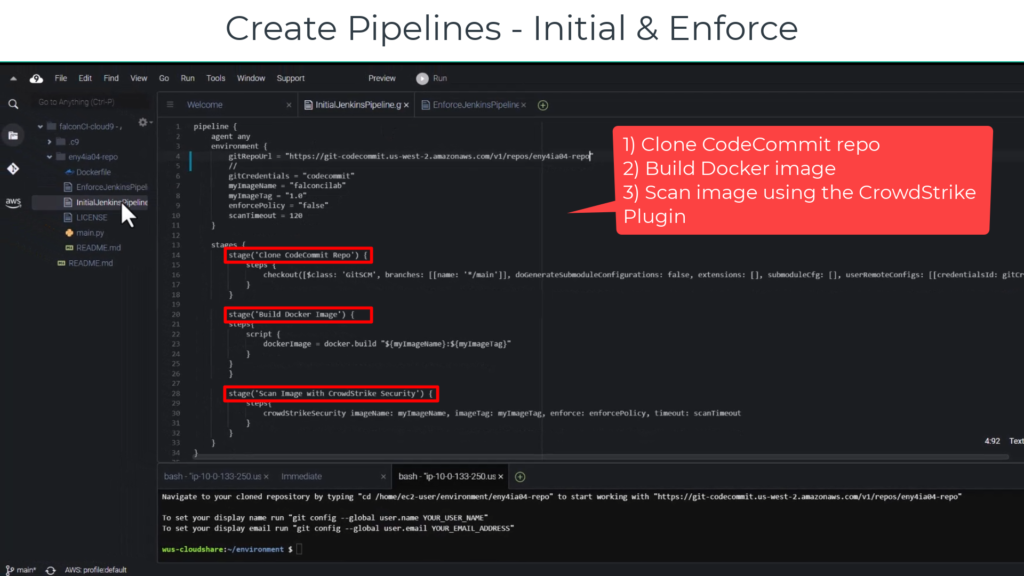 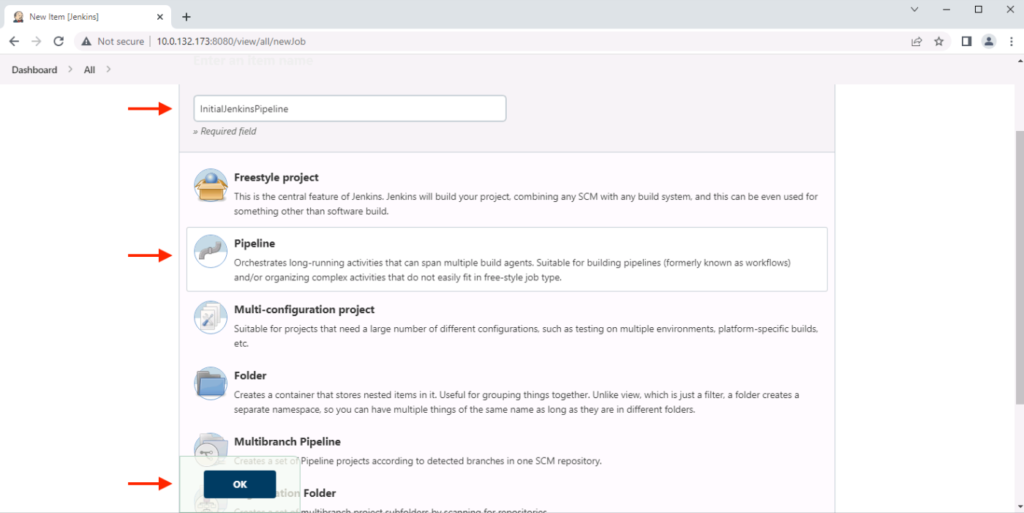 Scroll down to the Pipeline Section and paste in your InitialJenkinsPipeline.gvy code 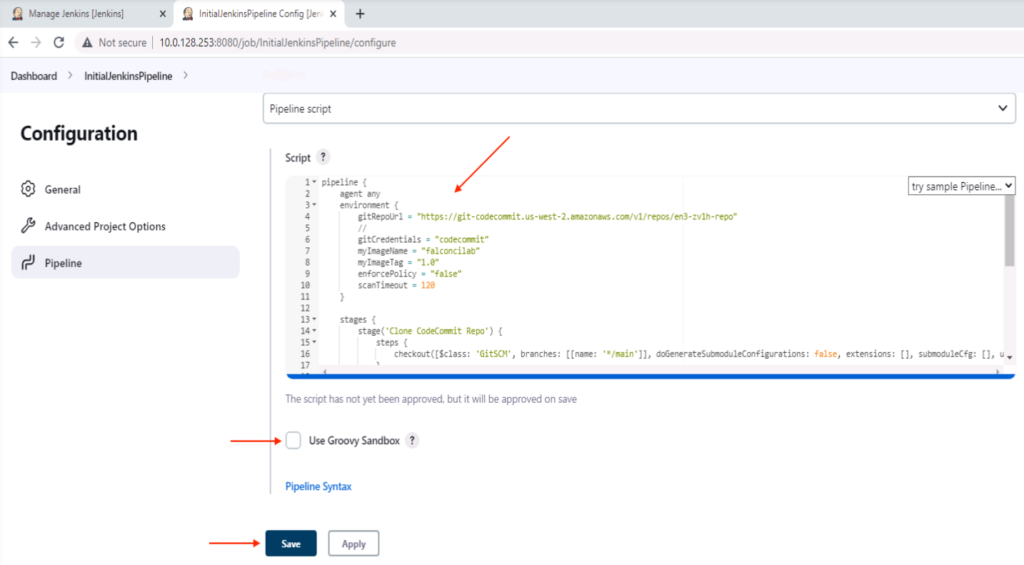 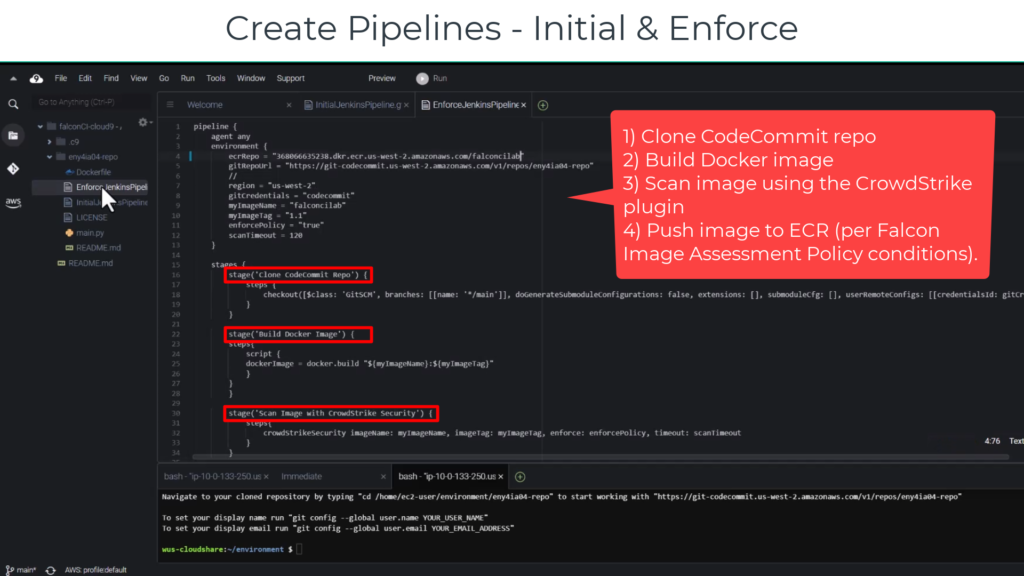 On the Jenkins Dashboard, you should now see two pipeline items available in the middle of the page.

When the Image Assessment tool assesses images from your registries, the images are compared to policies that you define. If the image matches a policy’s rules, you can view alerts about the match or you can prevent deployment of the image.

We will now create two new rules: Alert and Prevent as part of our assessment policy.

Now, we will the build initial pipeline (InitialJenkinsPipeline) and observe the results.

Since the Dockerfile is currently pulling from an old version of Python which contains critical and high vulnerabilities, the CrowdStrike Falcon Image Assessment prevented the build due to High Vulnerabilities (per the policy rules we created earlier): 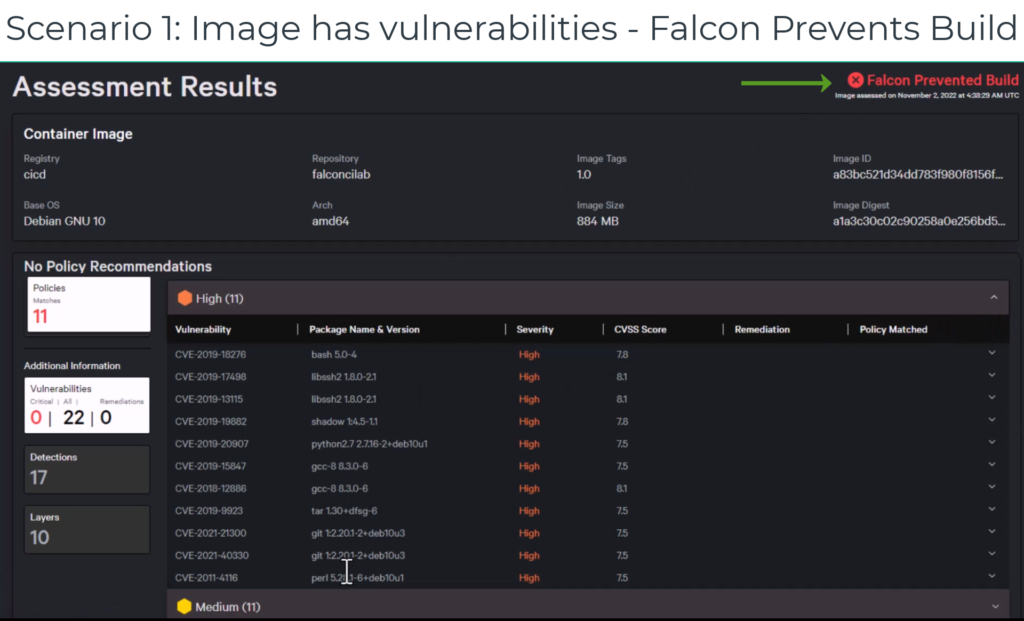 Jenkins sends the scan report to CrowdStrike, and you can see the same vulnerabilities on the Falcon UI and investigate them further:

At this point we are ready to run the Enforce Jenkins pipeline. However, first we will change the current Dockerfile to use the latest python base image (instead of a version with vulnerabilities). To do this, we make changes to the Dockerfile in Cloud9, “push” the changes and commit.

Next, we will run the Enforce Jenkins pipeline against the updated base image

Next, we will look at the Amazon ECR registry to see the newly built (non-vulnerable, clean) image. This image can be used for Application deployment.

The CrowdStrike integration with Jenkins ensures that workloads remain secure while DevOps works at speed without any performance hit.

Shifting Left with the CrowdStrike and AWS CI/CD Pipeline